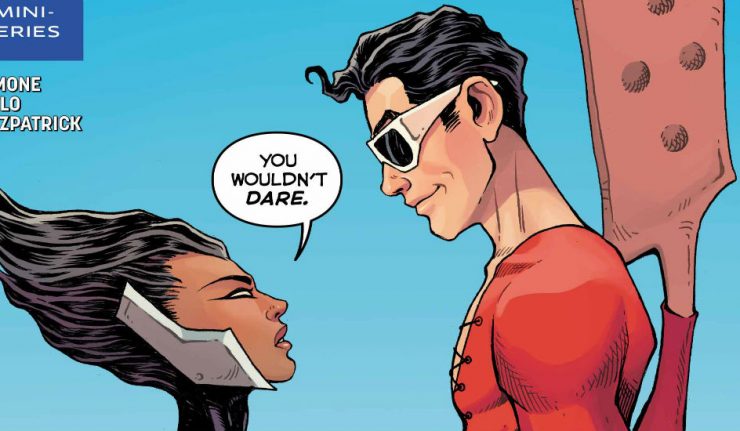 Just when Plastic Man thinks he’s got it all figured out…he doesn’t!  Believing that the Cabal is an invention of Obscura’s, Plas sets off the try and do the right thing for Pado.  Knowing he’s got to make some real changes in his life, he turns to Kirk Langstrom (Man-Bat) for a cure to his plasticized condition.  Langstrom explains that he can’t do anything.  It’s disheartening to Eel, because he was hoping to be able to get a fresh start and be a father to Pado.

He ends up taking Pado and Doris to the fair to attempt to have a nice time before…Social Services comes to take Pado.  Plas knows that Pado can’t continue to live on the street, it’s no way to grow up.  Plas wants to help and believes he’s doing the right thing, but when Social Services shows up…he feels like he’s screwed up again.

Meanwhile, it’s revealed that Plas’ real mistake was thinking there was no Cabal!  There is and it includes Hugo Strange, Per Degaton, Dr. Psycho and Amazo.  And that alien script the gals found a few issues ago…Durlan!

As Social Services attempts to take Pado, Plas gets a call from Obscura, she’s being attacked by…Plastic Man?!?!?!?!  Durlans are shape shifters…makes sense, right?  Plas gets to Obscura in time to save her, but he is unaware that Janet has taken her frustrations out on Mr. Leonard and has Eel O’Brian in her sights!

Plastic Man’s inner monologue is extremely strong this issue.  It seems as if there is an urgency and depth to it that has not been depicted before.  It doesn’t matter so much that some of his conclusions are incorrect, but rather that his heart is in the right place.  This might be the defining element of his character.  Plas wants to do what’s right, despite his illicit past.  This contemporary take on the character does a good job of finding the essential elements of the original Jack Cole stories and places them in a similar enough situation that it has the same feel even if the specifics are slightly different.

The scenes with Pado are real and touching.  Pado is a street kid that seems to have had it really hard, but recognizes that Plas really cares. It’s appropriate that Pado doesn’t want Plas caring so much, believing him/herself to be independent.  Perhaps, this issue it is portrayed most effectively, that Eel and Pado are both struggling with physical identity.  It’s been suggested that Pado is physically a girl, but identifying as a boy.  It’s not hard to see that Eel is struggling with a similar situation as he comes to grips as his body has changed and is effecting the way he views the world.  This is a powerful aspect of the series for both characters.

The humor that is inherent in the Plastic Man character enhances the story perfectly, it never feels out of place and there is always the tinge of tragedy behind the smile which has always been at the heart of the character.

This issue features too many positives to garner a negative.

This may be the best issue of the series so far as the humor hits just right and the depth of the characters is on full display.  The reveal of the Durlan fits the plot perfectly and brings in the larger scope of the DC Universe.  Hopefully, Simone and Melo will get the opportunity to continue this series.  They bring the right balance of humor and depth to this classic character. 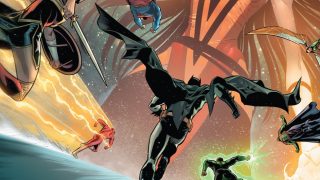 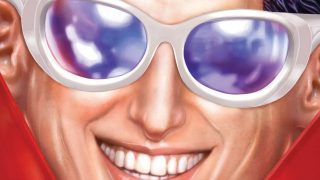