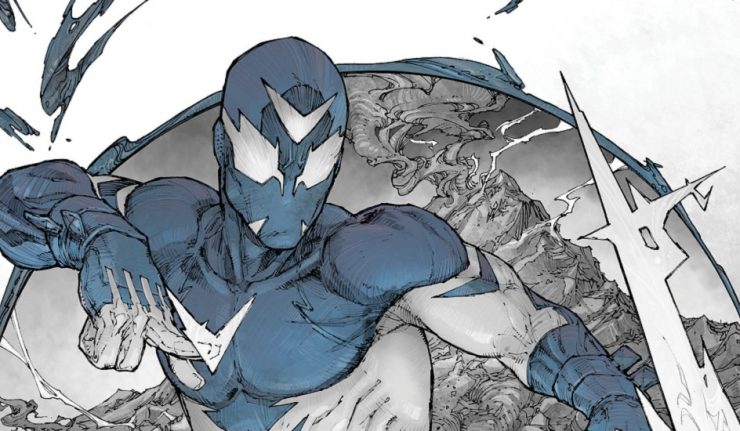 Derek seems trapped in an indestructible corner of the Dark Multiverse ruled by the “benevolent” dictator Perrus.  Unlike the rest of the beings Perrus has saved, however, Derek is unwilling to serve him and decides to revolt.  Will it be successful, or  are things about to go sideways?

Max Raynor is a great artist for this title.  He depicts the characters with such a classic look that really keeps the title grounded.  There are a lot of crazy characters, beings, and events in this issue, and the facial expressions of Derek and his family and friends back on Earth really kept me connected to the story.  Sometimes art adds a new dimension to the story.  Sometimes it elevates a story to an even higher level, but sometimes a great artists knows when to go minimal and just let the story shine, and I think that’s what is going on here.

The characterization in the title, especially of Derek, is fantastic.  The fact that DiDio is so adept at conveying this young teenager as someone who isn’t afraid to stand tall, even in the face of literal monsters, is truly admirable.  Derek is a great, down to earth, role model who makes mistakes just like we do, and he learns from them.  At a universe level, it is great to see how Lois helps Superman care about the everyday citizen.  Clark wouldn’t meet this family that needs his help without Lois, and in a universe where Green Arrow is mad a Superman for not caring about heroes lower on the totem pole, it’s nice to see Superman reach out.

I am not sure I truly appreciate where this story is going.  The monster characters are not really doing it for me because it’s  hard for me to care about characters from a part of the a Dark Multiverse I’ll likely never see again.  I can appreciate the core concept, but it feels like the Seven Soldiers concept was left hanging for little to no reason, and there were plots I actually wanted to see completed.

While the story represents a bit of a setback for me, the fantastic characterization supported by solid art really helps drive the story forward.