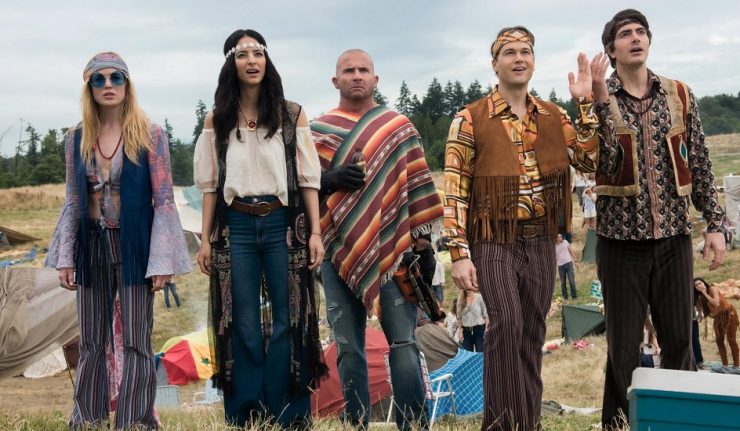 The emergence of the first post-Mallus magical creature in Woodstock 1969 uproots The Legends’ acquired state of normalcy and requires the recruitment of John Constantine.

Woodstock, a unicorn, and the butthead of buttheads accentuate the start of the fourth season of DC’s Legends of Tomorrow. What a way for this reporter to start his run of reviews on this show, huh? Let’s get to it.

Let’s start with the unicorn. I admit that I’ve never found these creatures of myth threatening at all, so bravo to the writers for throw in a little menace to the most passive of all magical creatures. As a guy whose half-sister spends two-thirds of her week around horses, let’s just say I’m used to seeing them devour whole apples rather than human hearts with bloody fangs.

As the first entry for the show into the supernatural from the science fiction, they couldn’t have found a better setting for a hallucinogen-inducing predator than Woodstock. Plus the manner in which it induces the hallucinations – animated rainbow hair that sprays musk – definitely looks like something you’d see if you were high. The laughs were great from the one-liners from Heatwave as always, and, wow, his hallucinations revealed layers.

This is the first time the team has had to tackle a problem from a magical standpoint as opposed to a scientific solution. So the landscape was ripe for John Constantine make his return to the series as a reluctant member of the crew with an outlandish but successful solution. More on him later. What works is that it doesn’t steer completely away from the time traveling foundation of the show; rather, it presents a different kind of anachronistic threat to the timeline besides Paul Revere appearing out of nowhere hilariously doing his chant as The Beatles leave their plane. I’m sure future anachronisms will vary from the light-hearted tone of this episode to a much darker one as the season progresses.

This season opener also focused on relationships, both familial and romantic. In the case of family, Nate’s visit to his parents in 2018 also introduces Back To The Future alum Thomas F. Wilson to the mythology as his overbearing, disapproving father, Hank. His resemblance to the actor who plays Nate (Nick Zano) is uncanny and creates the perfect counterpoint. Their distant relationship is one that a majority of fathers and sons can relate to. As a son who fell far from the tree myself, I can identify with Nate’s situation, though my own father is thankfully nowhere near as gruff as Hank and we are not on a first-name basis as these two are. Nate’s journey as a Legend is unknown to his father, and Hank sees his chosen profession as a historian as a waste of time and money. It is ironically this hilarious drug-induced hallucination that compels Nate to try and close the gap between them. If this means more chances for Thomas to appear on the show, then I’m all for it.

In Sarah’s case, at the beginning of the episode the Captain of the Waverider is experiencing a situation she hasn’t had to deal with over the past few years: moving in with her significant other, who also happens to be her boss. After her descent into the League of Assassins, murder and resurrection, recruitment by Rip Hunter, the loss of her sister and her father, and a dozen or so flings since then – Constantine being one of them – Sarah Lance feels accomplished during the past two years. She feels successful as opposed to the guilty party, and it’s on this wave of positivity that Ava proposes taking the next step in their relationship. So when a consequence from her solution to Mallus finally rears its ugly head – and that nag is ugly under the fairy tale rainbows – she feels inclined to withhold that fact from Ava for fear of losing what she’s gained. As a woman who has been through so much, it’s understandable why she’d be in that position despite shouldering it like another day at the office. Sarah feels like she’s in the light and wants to stay there despite Constantine urging her to drop the relationship to keep Ava safe based on his own failures. Her faith in her relationship is both tested and rewarded by Ava’s understanding about why moving in will have to be put on hold until all magical anachronisms are stopped. She also feels more like a leader, and offers a spot on the Waverider to John because she wants to pay it forward the way Rip and Laurel did for her. Understandably, Constantine’s presence onboard – given their history – presents something of a possible threat in Ava’s mind given both his volatility and potential as a romantic rival. Given Jess has been promoted to a series regular, the audience may get more of a piece of her mind than just boss-employee criticisms.

Ray Palmer, meanwhile, is on the flipside of Sarah in regards to his feelings for last season’s antagonist, Nora Darhk. During his stay on The Waverider, Palmer has had to validate his existence in his own eyes since his presumed death in Star City made no waves whatsoever. Further, he has tried to find love in the most unlikeliest of places. First his flirtation with Hawkgirl and now his unrequited feelings for the daughter of The Legends’ past nemesis, Damien Darhk. Beneath his need to believe that letting Nora escape the Time Bureau in spite of her crimes was the right thing to do lies a less altruistic motivation. His hallucination only pushed his unacknowledged feelings to the forefront, despite it resulting in him making out with a tree. Brandon Routh has found the role that suits his midwestern personality given he can be funny one minute and insightful the next. The interest of Zari in his plight serves as his moral compass and perhaps a better match for Ray. If Zari does have unrequited feelings developing for Ray, then this has the making of an interesting love triangle.

Now we come to the new reluctant Legend. Matt Ryan’s Constantine has gotten both animated and live action exposure since his NBC series was cancelled. The producers see his potential as a character and his loner status ironically makes him a perfect addition to the team. The inclusion of magic in the Legends’ adventures is all thanks to Sarah’s decision to make him an almost-unwanted reminder. While a magnet for trouble because of the way he conducts himself and his relationships, his mastery of the occult makes him the Legends’ best weapon. That fact was greatly demonstrated this week. While not as dark as the salvaging of Sarah’s soul in Arrow, his reputation precedes him for viewers who know he can deliver a spell to perfect execution.

Based on his interactions with Sarah as a kindred spirit, the writers are clearly making this first year as series regular his own path of redemption. He feels he is bound for Hell because of his past, and Sarah is there to remind him that doesn’t have to be his final fate. Again, Sarah sees a mirror in John – a fact accentuated to the viewers when his bisexuality is hinted at in the climax – and one that does not hesitate in blowing her off when she gets too close.

The mystery of what mystical force is hunting him makes its presence known in the final scene. Ryan portrays the seemingly-indestructible John in a vulnerable state after his bravado is easily decimated by this demon. It then becomes clear to the audience the route John goes from here: What better way of outfoxing a monster in pursuit than on a time ship?

There are too many cringe worthy moments in this premiere and main characters that are diluted in favor of light fare. The problem was that the cast and crew were trying too hard to be funny at certain areas, especially in the case of the Gary scenes. The episode title also doesn’t make the viewer want to tune in because of its lackluster appeal.

The scene which features the entire team stoned out of their minds was too short and had no lasting consequences beyond a farce that looked like a blooper reel. It would have been funny seeing both Sarah and Constantine getting through to the Legends as the show progressed, but too much time had been spent establishing the post-Mallus status of the team. The series has succeeded in the past to strike a balance between action and comedy, but this week it seemed a little off and very fast-paced. A hardass like Rory seems weakened in this episode beyond the one-liners. Caity Lotz, a very physical actress when it comes to fight choreography, did not even engage in a battle this week.

Also, given that former crew member Wally West aka Kid Flash checked in off-camera with the Waverider in the premiere of The Flash, this was a missed opportunity to connect the series. While time travel renders the chronal differences negligible – The Flash is set five months behind Legends and Arrow – the writers and producers chose not to allow for Kid Flash to have a cameo.

Depth was not expected given the focus on Woodstock, and the cameos of historical figures were fun, but they ignored a chance at drama by possibly having Nora Darhk as the actual cause. This would have allowed for the team to distance themselves from Ray for his error in judgment. Also, while her heart was in the right place, Zari’s comparison of Ray’s bad girl crush to her battle against changing the timeline to save her mother feels mismatched. Also, Tom Wilson’s cameo as Nate’s father feels very underused given his comedic potential.

While the seeds were planted for potentially strong subplots, there is no big bad and the threat to Constantine’s person feels like a centralized danger. The inclusion of John to the group has potential if handled right, but there has to be more drama injected to hold the viewer’s interest.

I’m not saying that this episode was bad; I cracked up numerous times admittedly. But I just feel that it was overdone in favor of the lighthearted tone rather than something on the level of Constantine-worthy darkness. Maybe that was deliberate so that he would not overshadow the season as opposed to being an addition to the cast. At best it felt like Ferris Bueller’s Day Off Legends style, but the hilarity of seeing everyone high as a kite was too fleeting. If it had been stretched out a bit more, then I feel it would have been better.

The character growth for Ray and Sarah are great considering the state they were in at the series’ beginning. Sarah has turned a corner and found her place on that ship and that team; she’s finally pulled an Oliver. The trajectory of this season, balancing science fiction and fantasy elements, has to be handled with care by the writers. The focus has to be on story as opposed to random shout outs to historical figures and cheap laughs.

As a first time critic of this series, I will try and be unbiased. Besides, next week is the gang tackling a fairy godmother in the time of the Pilgrims. Like I said, I remain unbiased and have my fingers glued crossed for depth balanced with humor.