While the Legends break Constantine in on a mission during the time of the Salem Witch Trials, Nate must assist Ava in securing the Time Bureau’s funding in spite of the source revealed to be his disapproving father, Hank.

This episode was a slight improvement on the premiere, primarily because of John Constantine’s fish-out-of-water status on the Waverider. John was the stand-out character this week. Matt Ryan, though not as dark, portrays the male version of Sarah when she first boarded the time ship. Constantine is a born loner and is forced to work in the context of a team in order to save his own skin from whatever is hunting him. His presence is even enough to upset the already-temperamental Mick Rory. They are virtually the same in character if not in methodology, which is why they cannot tolerate each other.

Sarah’s teasing John’s efforts to break out of his comfort zone is hilarious. Even more funny are the interactions between he – the hardened, chain smoking UK occult master with baggage – and the seemingly-pure, elegant fairy godmother who is more than she appears. These two clash because, like he and Heatwave, they are alike in that their intentions are not entirely altruistic. The fundamental difference, of course, is John is trying to contribute to the team in a positive manner to protect them as opposed to directing them in a path of his choosing. At least not yet, anyway. The post-Mallus status of the timeline requires an individual like John to help piece the puzzles together for a team composed of scientists and assassins that are out of their depth. The writers and producers have finally given Constantine fans that second season they wanted, just not in the way they expected.

The plight of Jane and Prudence Hawthorne in Salem, Massachusetts is the perfect parallel for Zee’s storyline. It was a smart subplot to follow up on after that moment with Ray in the premiere. Her plight is not unlike any of the other crew members, or the viewers. Her dialogue in her conversation with Jane is text book displacement; she is relating her mother’s tragic end and her own embitterment to what awaits the Hawthorne family. The notions of racism and oppression are also a parallel to the anti-Metahuman climate in her time. As a metahuman herself, she has felt the sting of ignorance and is not against the notion of an eye for an eye.

Zee has a strong moment of crisis at Jane’s trial as she tries to liberate her. Using her powers in view of already-terrified and paranoid people, even when she almost crosses a line, is counterproductive. She contradicts her very argument of the dangers of the fear of people in power, an argument very relevant in the age of the Trump Administration. It is only when she successfully reaches Prudence before vengeance is carried out does Zee understand Jane’s point of view. It will be interesting to see where Isis’s journey of accepting what she cannot change takes her this season. Given the gravity of crimes done to her own mother, Sarah will need to be her rock given how much she has had to shoulder and overcome. 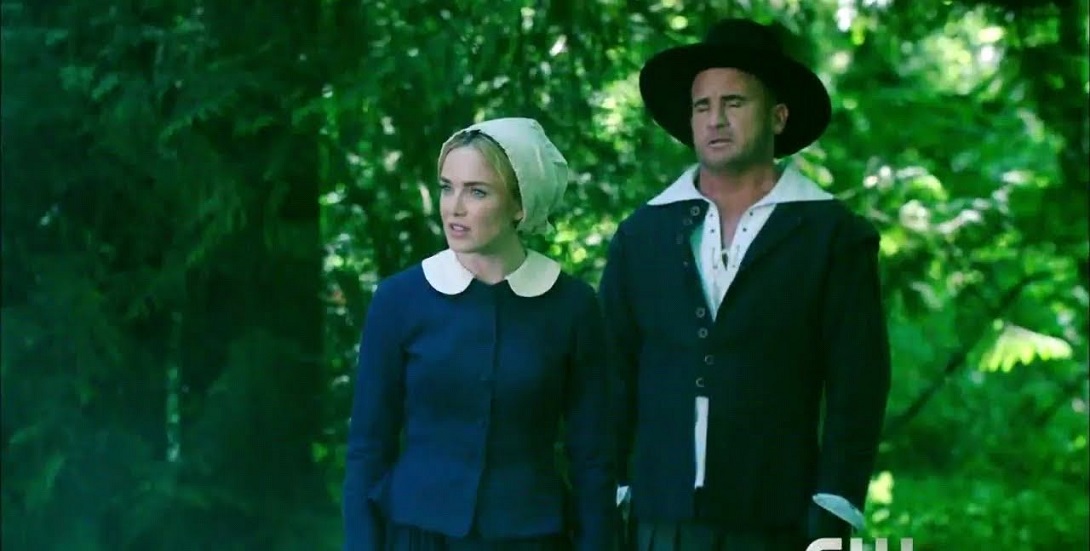 Speaking of Sarah, Caity continues to offer the viewers a more upbeat version of White Canary. Although her pun was cringe worthy, it shows she’s able to joke and see the silver lining. She is centuries from when she first returned to Starling City in season 2 of Arrow. She’s the captain of a successful team, her relationship with Ava is stable, and she has the opportunity to mentor both Zee and Constantine.

A huge improvement from last week is when we see Sarah actually getting physical in the climax this week. Caity is phenomenal at fight choreography, and she has her dance background to credit. However, her moment with Zee was very multilayered. She sees that temptation to change her own train wreck of a past in Isis, and therefore does her best to relate her need for self-control to Zee. Out of anyone on that ship, Sarah has lost the bulk of her family and even her own soul, due to forces beyond her control. Still, that loss has only made her self-regulation stronger given her awareness of how damaging interfering with the past can be to the present. It remains to be seen whether this new responsibility – coupled with whatever it is that is hunting John – will become too much to bear. 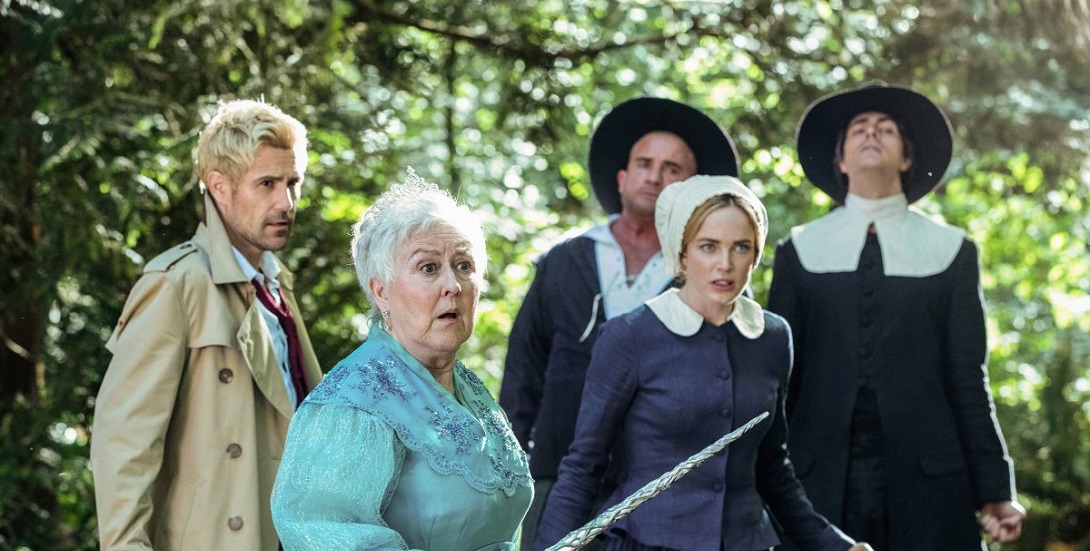 Now on to the “mythery” (see the episode to understand that made up word) of the week. While initially you think “Disney riff” the characterization Carr applies to her role as the second magical opponent resembles the Fairy Godmother from the Shrek franchise. The reworking of how a Fairy Godmother works helps the writers in giving the antagonist a reason to hate her job. This is a woman who feels she gave all her previous hosts the world and is no longer altruistic; her bastardization of every Disney reference works based on her applied common sense. It’s through her final failed negotiation with Constantine that the audience learns how severe John’s plight is, especially since he makes the offer of being her first host. Further, her refusal at this get-out-of-Hell card for fear of this unknown entity’s reprisal enhances the threat level to John and, by extension, the Legends.

Cringe, cringe, cringe. That’s the best way to sum up what went wrong this week. What could have been a strong, in-depth episode focusing on intolerance, wound up being just another acid trip. While Fairy Godmother’s initial holier-than-thou singing had us all singing along with Mick when he said to shut up, The Time Bureau situation was the ultimate cringe. 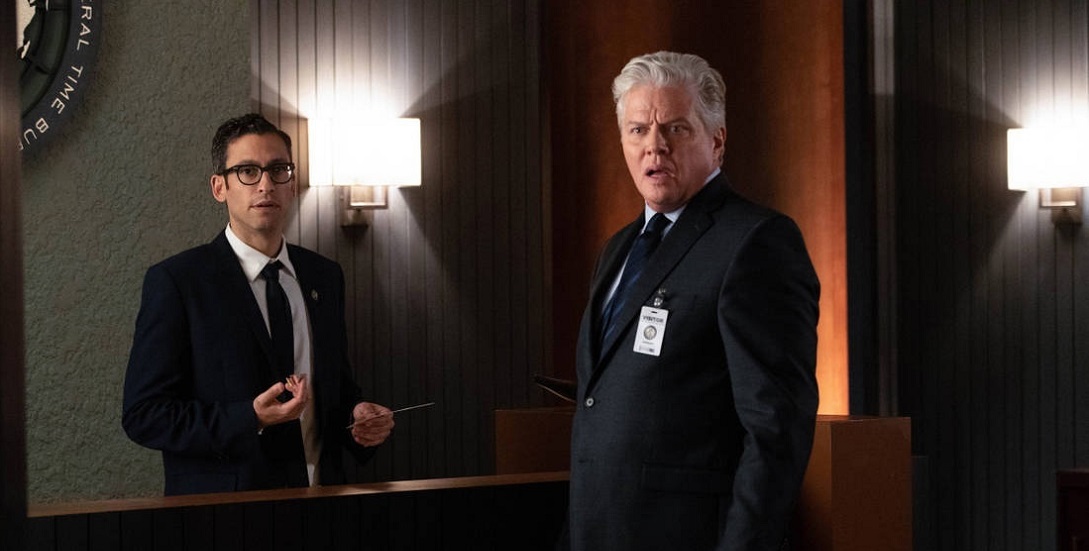 So Henry Heywood is the source of funding, he wants validation for it, and Nate has to tell him he works with them and he’s a metahuman. Straightforward, right? Then, in comes the shower caps and Gary showing the bandage where his nipple used to be (which we could still see UNDER THE FRIGGIN BANDAGE, SFX people), and Nate holding a pig that turns into a naked Ray Palmer. That situation could have been treated more mature given this was the main backing of the agency. This could have been an episode all its own and a vehicle to catch up new viewers to the present day; they did something similar on Stargate: SG1 so it’s not that far outside the box.

Plus, they were saying goodbye to a major crew member given Nate had been invited to work at the bureau. That also could have been a solemn moment like Jax or Wally leaving was. Instead it was needlessly played for laughs. And while it was a switch having Thomas F. Wilson play the straight man in the gags, he still feels underused.

While the season hasn’t had the strongest start, it’s still early and everyone’s still trying to get their bearings in the new status quo. I feel that The Legends are like Marvel’s Spider-Man in the sense that they are at their best when they’re saving the day while having dirt kicked in their faces. Seeing them on top of the world and taking things too lightly takes away the gravitas and misfit element that made them unique.

Still, this week was saved by Constantine and Zee with regard to humor and depth. Their character arcs this year promise to be engaging and fun, but there has to be some more darkness when it comes to John. Overall, a slight improvement this week but future episodes could try to take certain story elements more serious. After only two weeks, I’m starting to pray that someone kills off Gary. See you guys next week.