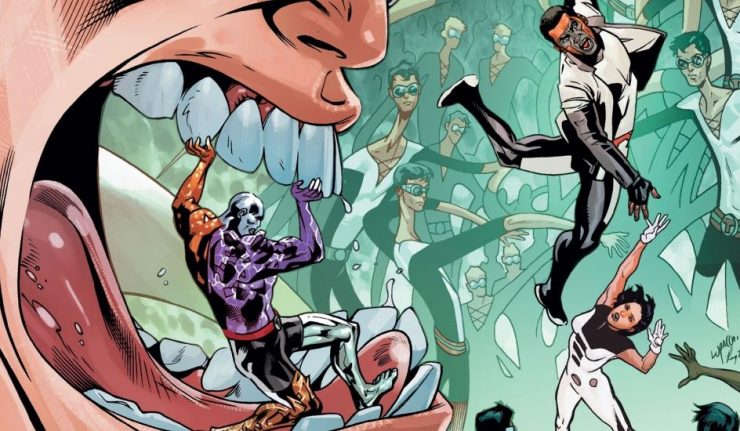 It’s three startling Terrifics tales, kicking off with a deadly nightmare at Stagg Manor! When a plot to steal Plastic Man’s powers goes awry, the Terrifics’ new home and everyone in it are at the mercy of stealthy plastic monsters. Looks like Sapphire picked the wrong day to host a Halloween dance for her Stagg Industries internship program! Next up, discover the secret origin of Java the caveman, and the secret he’s keeping will shock you. Last but not least, we uncover Tom Strong’s hidden adventure in the Dark Multiverse—hold on to your holy socks!

For this special annual, Jeff Lemire takes a break as three new scribes take the reins. The three stories include an adventure of the title team, while the other two fill in some of the background story for the series.

The first story involves the team attending a Halloween party for Simon Stagg’s employees. Gene Luen Yang quickly picks up on Lemire’s usually mix of humour and pathos. While Plastic Man and Metamorpho compete at Twister to determine whose powers are superior, both Phantom Girl and Mister Terrific meet new friends that help them briefly assuage their loneliness.

However, it turns out that these new friends (and everyone else present) are actually doppelgängers created from Plastic Man’s DNA. This is bad enough, but the part that truly pulls on the heartstrings is when Plas comes face-to-face with the doppelgänger of someone very important to him. Plas can’t bear to “kill” the doppelgänger, prompting Rex to show a surprising bit of sympathy to his teammate.

This encounter does raise some interesting points to ponder. Since the doppelgänger took on form of people at the party, this implies that the real person is a Stagg employee, which means that Plas might run into him while the team is living in Stagg’s building.

Also, Phantom Girl was definitely showing signs of being attracted to the doppelgänger. So, perhaps she will find herself falling for the real person when they meet. But that might complicate her relationship with Plas.

The second story shows Simon Stagg’s servant Java recalling his original life as part of an Neanderthal tribe in Earth’s prehistoric past. It wasn’t an easy life, but Java was happy – at least until a tribe of Homo sapiens showed up, using up the food and resources in their area. Eventually, when Java was frozen and later revived in the modern world, a Homo sapiens named Stagg experimented on him. Full human intelligence may be a gift, but Java sees it as a final indignity of the Homo sapiens – making him into one of them.

I like that this story adds more depth to the character of Java than we have seen in earlier stories. In the pre-Flashpoint DCU, Java was only as intelligent as a regular Neanderthal would be, and his motivations were very simple. He was slavishly devoted to Simon Stagg, was in love with Sapphire Stagg, and hated Metamorpho. He still feels the same way about Sapphire and Rex, but he now secretly has as much contempt for Stagg as he does any other Homo sapiens.

The third story recounts the story of Tom Strong’s adventure in the Dark Multiverse and how he came to leave the beacon that the Terrifics found in the first issue of this title. Although this story might prove a treat for Tom Strong fans, I found it to be somewhat boring and pointless.

Tom Strong already explained to the team why he had left the beacon during his guest appearance in The Terrifics. I don’t feel that seeing the full story really served any purpose other than as an excuse to include a Tom Strong story in this issue.

Now, I never read the original Tom Strong series. Perhaps I might be more enthused about seeing the character if I had. But nothing about his appearances in this series has really done anything to engage my enthusiasm. It’s not that I dislike the character, but I feel that these pages might have been better spent on a solo story of one of the main team – like Plastic Man or Metamorpho.

Despite one of the backup stories being somewhat lacklustre, the main story lives up to the high standard set by Lemire in the main series, and the other backup was a fascinating look at one of the supporting cast. So overall, I would say this was a great issue and well worth reading.