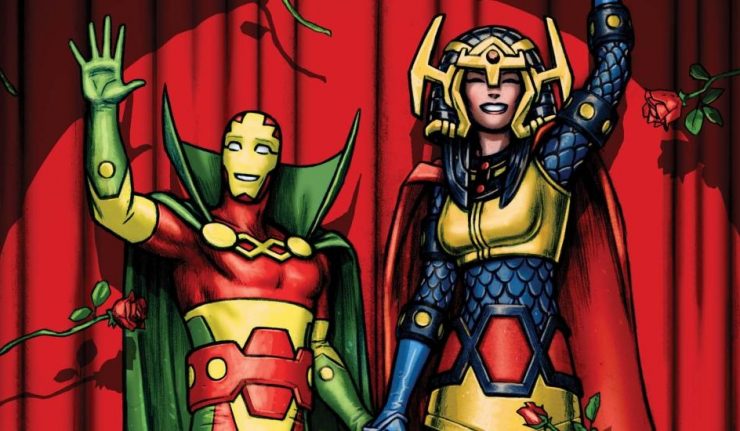 It’ll be a miracle if you can get through this mind-bending conclusion with your sanity intact! After his epic battle with Darkseid, Scott Free sees life a whole new way: he’s the new Highfather of New Genesis, and he’s madly in love with his wife and child. But what if it’s all a lie? Did Mister Miracle really escape death way back in issue #1? No one really knows but Tom King and Mitch Gerads!

We’ve reached the finale of Tom King’s masterful miniseries, and I have to admit that the ending came as a complete surprise. Even though I still fee that my theory of what’s going on is correct, I certainly expected that the final events of the series would to go down differently.

Right from the first issue, I was sure that Scott was trapped in a virtual world, and that the series would end with Scott emerging from this false reality into the canon DC Universe. This issue verifies that Scott is experiencing an illusory world, but shockingly, Scott does not escape.

He chooses to stay in the trap.

The world’s greatest escape artist finds the way out – but opts not to use it. Scott decides that staying with his family, even if they aren’t real, is worth all the fighting and death he faces as the ruler of New Genesis.

And Scott is now acutely aware of how false his reality is. He now has regular encounters with the dead. And strangely, he seems to be on friendly terms with all of them, friends and foes alike. Granny Goodness acts as if she really is his doting grandmother, Forager and Oberon offer sage advice, and even Darkseid sits peacefully on the couch with Scott and Jake.

I must also compliment Mitch Gerads’ artwork. He beautifully shows Scott’s world fraying around the edges, cluing the reader in to the underlying falsity his experiences. And the use of images from the original Kirby series as pictures hanging in the background is a genius touch.

But this isn’t the end of the story. The last panel informs us that the story will continue in a successor series. But will it be another mini, or possibly and ongoing series? And will it be about Mister Miracle or the New Gods in general? Or could it be connected to the upcoming Female Furies mini?

Although, neither King nor DC could have known it would happen, there is a brief scene that serves as an apt tribute to Stan Lee, coincidentally coming out just two days after his passing.

It’s no secret that Jack Kirby created Funky Flashman as a parody of Stan Lee. And Funky sometimes calls baby Jacob “Jack” or “the King”, invoking the memory of Jack Kirby. Funky and Jacob are shown joyfully playing together with some New Gods action figures. What better sendoff could there be than to see Lee and Kirby together again, doing what they do best: creating stories.

The only complaint I have is that the series is ending with so much unresolved, when I expected that the finale would wrap everything up. However, the lack of proper closure is mitigated by the promise that a there is a successor to the series in the works.

Mister Miracle has been an unprecedented experience. It plays with your expectations of how a superhero comic is supposed to work, and keeps you guessing. But it’s also a loving tribute to Jack Kirby’s original vision of the Fourth World. I eagerly await word of series’ successor.