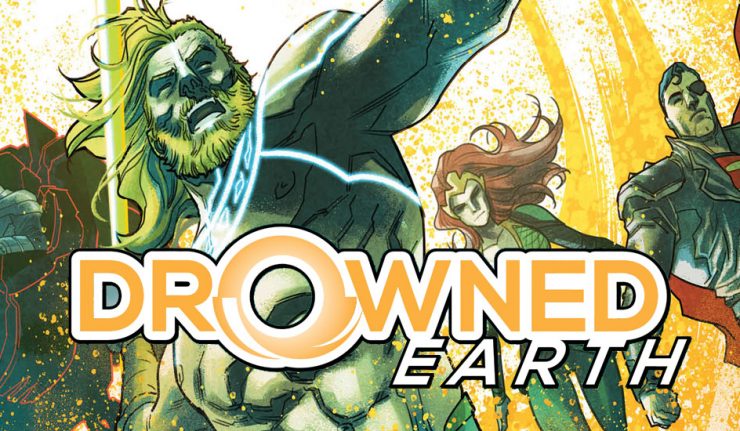 “DROWNED EARTH” finale! Aquaman faces the truth behind Atlantis’ past and must find a way to reclaim the power of his birthright or watch the floodwaters drown everything he has ever loved! With the world at stake and the Justice League on their last sea legs in their battle against the Ocean Lords, Arthur makes the ultimate sacrifice to return balance to land and sea!

**For this review, Aquaman reviewer Cameron Tevis and Justice League reviewer Derek McNeil have collaborated, and have shared both of there opinions below**
Positives
Cameron: Howard Porter’s artwork is a high-point of this series. His dynamic line art really makes each panel exciting.
But the best thing about this arc is the concept.  It shows how important Aquaman is within the DC Universe. With aliens from worlds of water attacking Earth, it proves that Aquaman’s importance is more significant than just in the oceans.
Derek: I agree that the concept being the best part. Aquaman has an amazing amount of untapped potential which this storyline finally begins to explore. I hope that the new creative team will continue to explore this.
I just loved the moment where Black Manta taunts Aquaman by asking him what good is the power to talk to fish, and Aquaman’s reply, “Well… When every hero on Earth is a fish? Plenty.”
Finally, it’s only briefly mentioned in the epilogue, but Wonder Woman announces that Mera will be taking Aquaman’s spot in the League while he remains missing in action. Mera’s former stint in the League proved that she had the potential to be a formidable member of the team, but unfortunately her tenure was cut short before she could live up to that. Hopefully, she will be around a bit longer this time.

Negatives
Cameron: The concept is fantastic, but I feel it wasn’t executed in a satisfying way. Even though this issue had a great climax, the arc overall felt rushed. We never really saw the Sea Gods do anything, we never got to know their personalities. It seems like a major opportunity missed.
Derek: The ending did feel a bit rushed. It does seem that one of the Sea Gods, Admiral Tyyde, survives the final battle. Given that Aquaman is headed to “completely uncharted waters”, she or other Sea Gods might appear in that story as Aquaman explores other alien oceans.
Cameron: The inclusion of the Legion of Doom seemed to detract from the story. Rather than getting new and exciting villains the Justice League could go against, the Sea Gods just used the Legion. And even the Legion came across like cartoony characters rather then the fleshed out realistic characters we’ve come to know. Unfortunately, this arc came across less like a new epic and more like a new episode of the Superfriends.
Adding to that, the overuse of the pirate motif and speech just took me out of the action by taking away the sense of urgency and any sign of realism. It isn’t Pirates of the Caribbean, it’s Aquaman and in modern times.
Derek: The Legion of Doom had some good moments, like seeing Black Manta begging for Luthor to forgive him for betraying the League and save him. It also allowed for Batman to show what a badass he is.
However, their inclusion made the story somewhat overcrowded. Even with the League reduced in numbers, there were too many characters to allow for all of them to be used to full effect. For example, Sinestro and Grodd are top level threats, but Batman plows through them in a couple of panels. Sure, Batman could beat them, but he shouldn’t be able to just swat them like flies, even with battle armor.
Cameron: Recently in the Aquaman comic, he has proven to be a horrible leader compared to the villain Corum Rath. Unfortunately, in Drowned Earth, Aquaman proves, yet again, to be a poor leader and poor hero when he decides to risk the entire planet of 7 billion people to apologize to the Sea Gods. These Sea Gods have turned everyone into sea monsters, they plan to conquer the entire planet and destroy Atlantis. These same Sea Gods have been locked in a Graveyard for thousands of years that even broke Poseidon mentally after staying there only a short time.  There isn’t a realistic chance that reason would reach these beings, and even if it did, why would you risk 7 billion lives for their 3? It’s not compassion, it’s incompetence.
Geoff Johns managed to bring Aquaman to the forefront and make him a great character and it seems that isn’t where DC wants him to be. Besides being apparently incompetent, now he loses his memory and kingdom…again which he just did in the Corum Rath arc, but now Mera also replaces him in the Justice League. The entire thing was a way to put Mera on the League and isolate Aquaman again. Don’t they realize both can be there? They are partners, it isn’t one or the other.
Derek: I understand what Snyder was trying to do by having Aquaman take the risk to apologize to the Sea Gods. There is something noble in risking everything to put right an ancient wrong. However, I agree that it was horribly reckless for him to risk the entire Earth on the long shot that the Sea Gods were redeemable. To be fair, this is a common trope in superhero comics: doing the right thing regardless of the consequences. I have little doubt that Superman would make the same decision, but Batman might not agree.
DC Rebirth was supposed to be built on hope and show real progress in the characters. Since Johns departure that model has fallen apart. Bendis has eliminated all progress with Superman, King has killed hope as well as the return of Wally West, Nightwing is regressing and now this is putting Aquaman back in the box.
Derek: While I do have severe doubts about the direction of the Superman books and what’s happened in King’s Heroes In Crisis, I’m not sure we can completely write Aquaman off as a hopeful character yet. Arthur’s vision in last week’s Aquaman #42 seemed to establish Arthur’s connection to hope. And going by the blue glow shown reflected in his eyes, this somehow connects him to the Blue Emotional spectrum light that powers the Blue Lanterns.
If the new creative team follows this up, this could be an exciting new direction for Aquaman. However, I will be disappointed if they ignore it altogether.

Verdict
Cameron: What started with a fantastic concept quickly fizzled into nothing. It was a busy climax with no character development in either the League or in the new villains. The characters were all two-dimensional and very cartoony. We once again see Mera prove to be a better hero than the titular character of Aquaman.
Overall it seems like this arc, which had so much potential, was actually a major step back for both Aquaman and DC Comics as a whole. If you want a fantastic epic that shows how great Aquaman can be, stick to Throne of Atlantis.

Derek: While the finale didn’t quite live up to the promising start, I don’t think we are left with nothing. Although it doesn’t pay off as a complete story in itself, it does give a promising starting point for the forthcoming new direction for Aquaman. I am cautiously optimistic that the new team will use this to break the endless repetitive cycle the character seems stuck in and actually do something fresh with the character.