In an alternative history set in a world where the five families of Murder, Inc. never gave up power, this sexy crime thriller takes you somewhere you’ve never seen in comics. From writer Brian Michael Bendis and artist Michael Avon Oeming, the Eisner Award-winning creators of POWERS, comes another brand-new chapter of THE UNITED STATES VS. MURDER, INC.

History is always told from either the winner or the loser’s point of view.  Bendis does a great job of beginning the story with a front of the class school report where one of the students simply states after an audience question “She declared war on us!”

The scene quickly evolves to a meeting of all five families, and Don Bonavese asks for a vote from the other four families to proceed with an assassination attempt that he has already ordered for Jagger Rose and Valentine Gallo to commit.  With US Madame President Erica Sanchez already in Japan flexing her muscles over the latest attack on the Bonavese Family, both Rose and Gallo are perched atop a roof one mile and a half way with Rose welding a high power sniper rifle.

After dismissing her secret service detail save for one agent, Madame President orders Agent Gary to relieve her stress of the day.  However, during a moment of risque sex, Rose pulls the trigger despite Valentine’s plea to talk about the situation they are in.  As the agent discovers Madame President is not participating in his efforts, he emerges for air to only be shot in the head as well.   Agents storm the room, however, there is a sense of ambivalence about the entire situation from the remaining secret service agents.

Meanwhile, Rose and Gallo , escape into the streets of Japan, only to be discovered by drones and local police.  A chase ensues and subsequently Valentine tells Rose that he is “out of here”.  Rose is hit in some cross fire as Valentine retreats into a night club.  Valentine knows he has crossed over from trained agent to an official “made man” even though he didn’t pull the trigger.

And as the students finish the class presentation about Madame President, we find that Valentine is taking the fall as the man who tried to destroy America as “everybody knows his name now!” 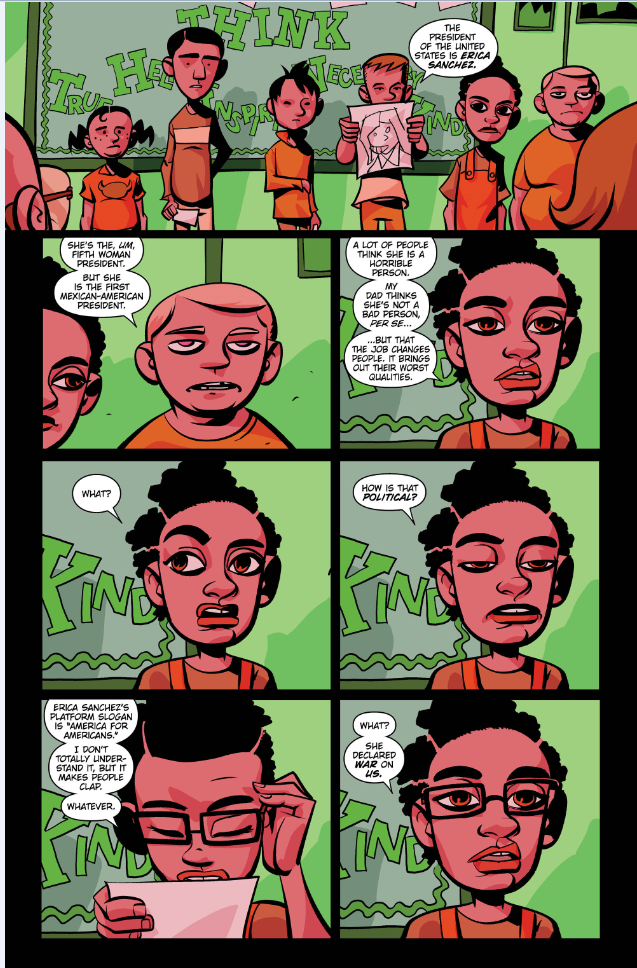 Bendis doesn’t fool around and really does a great job of book ending the story with a school presentation and the big reveal at the end.  And we get to see the real leader (?) of the five families in Don Bonavese (or time will tell on that one).   And while Madame President doesn’t survive, we really get a breakneck pace with this book and find out Jagger Rose really is the one with the power!  But Valentine is a pawn.

The artwork is clever in this one as you check out the dialogue comparing the streets of Japan to a maze and then the actual visual of a maze.  No “Where’s Waldo” moments in this as we see the nightclub teeming with patrons, however, clever magnify glass effects provide us Valentine’s location. 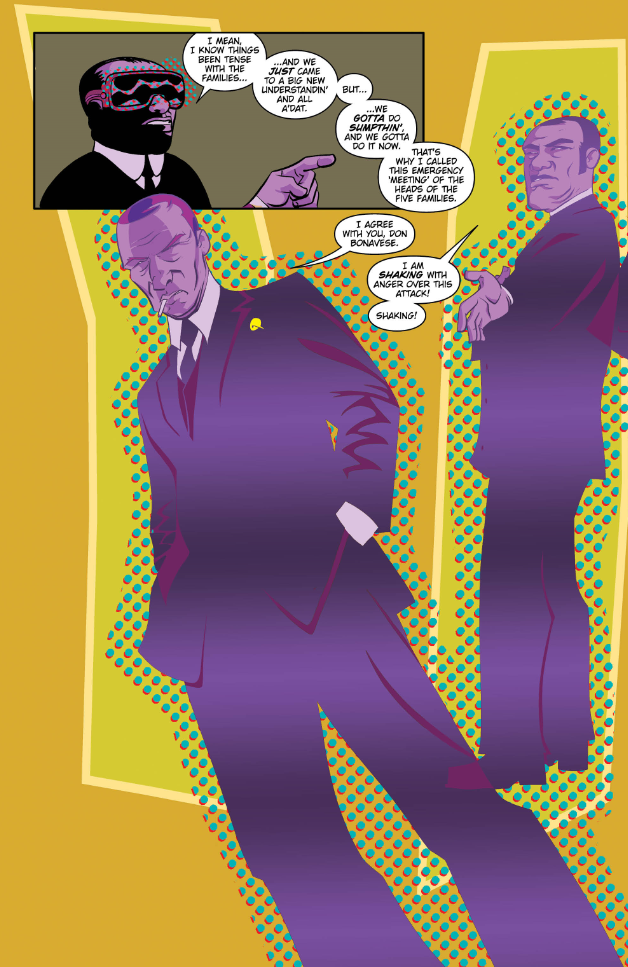 I don’t like Rose getting clipped in this issue.  She needs to survive.  It was a torn Valentine in this issue with no commitment to the cause.  And this issue is pretty graphic in its treatment of a clandestine power sex encounter with Madame President and her agent, Gary, as she welds worldly power as well as dominance over her agents in a myriad of ways.  Not a PG-13 moment, so be forewarned!  I’m still looking for an update in drawing style as these characters deserve a sharper image ala Todd McFarlane type pencilling.  The assassination of Madame President deserves that.

Best issue thus far for Bendis, but I didn’t like Rose taking a bullet.  Let’s hope this is a minor setback, but we now know, this is a very adult read!