Mandrakk has risen! Are Hawkman, Firebrand, and Neon the Unknown enough to defeat the ultimate threat to the multiverse?  How does Alden Quench play into all of this?  The answers will surely be Unexpected!

What a battle for the ages!  This entire issue is one big epic showdown between Mandrakk and Hawkman, Firebrand, and Neon the Unknown, and wow is it awesome.  We open on Nil, the Monitor World, and a world we have not seen since Final Crisis.  The very first page shows looks of pure horror on Firebrand’s, Neon’s and Hawkman’s faces as they realize they are looking at the multiverse’s biggest threat.  I mean, the being just took down a literal Tempus Fuginaut!  Despite showing horror on their faces, our heroes answer the call to save the say and begin the battle, all while Mandrakk recites his monologue.  He really isn’t even listening to the heroes who are getting the s*** beat out of them, but most of what he says is true.  How could our heroes even stand a chance when they are facing the being that took down the Monitors?  Our heroes get destroyed with very little effort from Mandrakk, but hey, they look great while it happens. 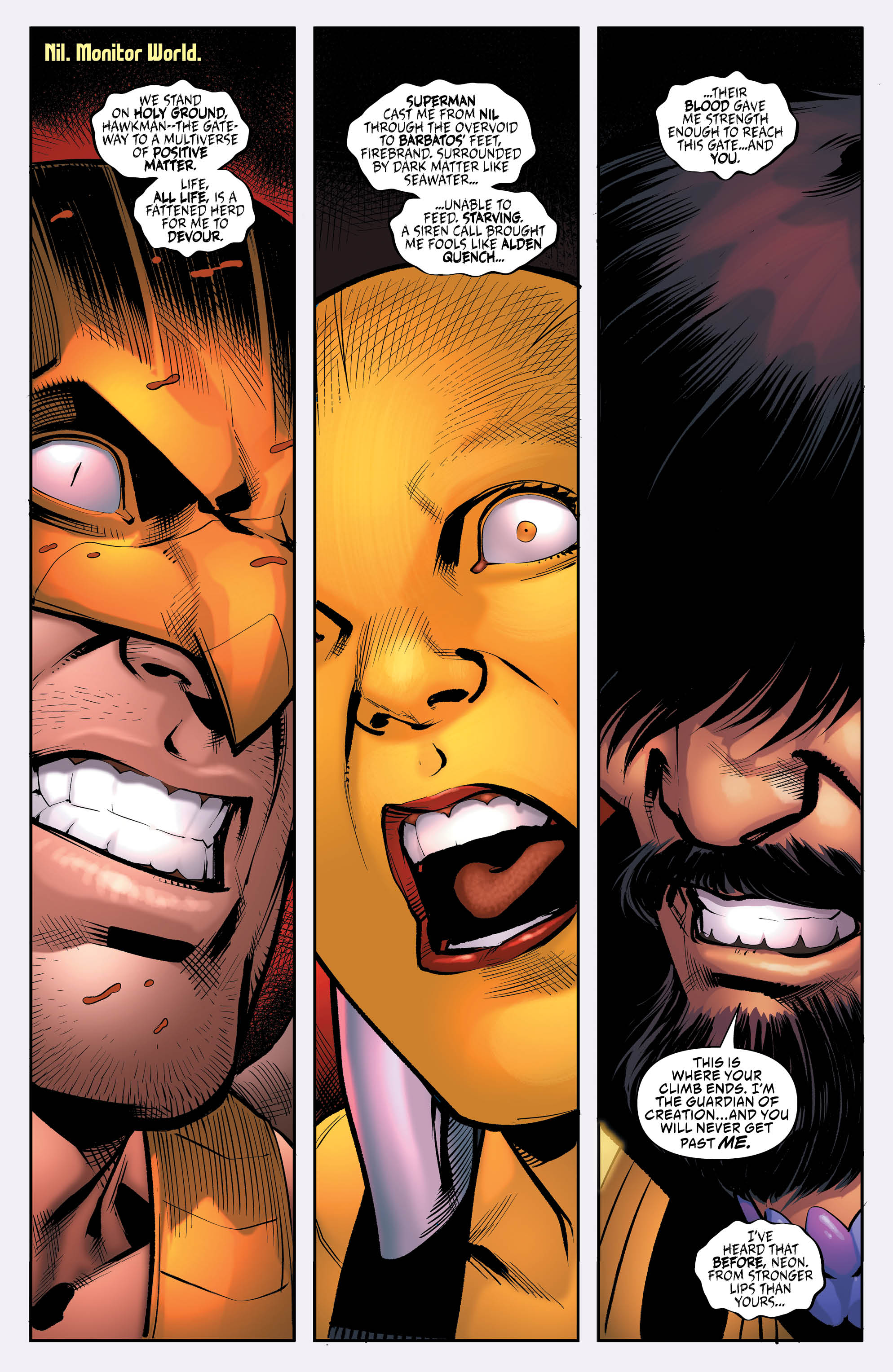 Ronan Cliquet, Jeromy Cox, and Carlos M. Mangual are the real stars here because the art in this issue in probably the best of the series so far.  Everything is painted with a red glow coming from the Bleed that surrounds Nil.  Th rainbow elements of creation look great as they’re being used to attack the dark, sinister, Mandrakk himself.  The lettering is equally as amazing.  There are so many different onomatopoeia that allow readers to really get a sense of whats going on in the battle.  Mandrakk’s lettering is also extremely unique and well done.  I have honestly never seen lettering in that style before and it makes Mandrakk’s monologue all the more captivating. Things are already looking bleak a third of the way into the issue.  Firebrand doesn’t have much left in her, Hawkman can’t seem to get a single hit in, and Neon keeps getting tossed around like a rag doll but always seems to have a little more fight in him.  Unfortunately for our heroes, a new threat enters the fray: Alden Quench, the Bad Samaritan himself.

Thing turn from bad to worse, because Quench is on the Monitor’s side, and now, he’s got power.   Our heroes are on the verge of annihilation when Quench realizes that Mandrakk doesn’t need him anymore, so he turns on the big bad in order to help himself.  This could not be more foolish as Mandrakk makes quick work of the Bad Samaritan, killing him and probably for good this time.  The scene continues to be drawn spectacularly with beautiful white and gold speech bubbles for Quench, and warm colors that really pop during the battle.  This gives time for our heroes to try and recover, but not much of it.

In the final scene of this issue, Mandrakk towers above our heroes, taunting and degrading them, calling them, “The secret weapon of a forgotten people, the heart of destruction, and the blind creator,” but is intrigued when he discovers a 53rd world has risen.  Our heroes try and mount one final attack, but it is very short-lived as Mandrakk is able to sink his teeth into Neon, likely killing him.  What will happen next is anyone’s guess, but I look forward to the 8th and final issue! 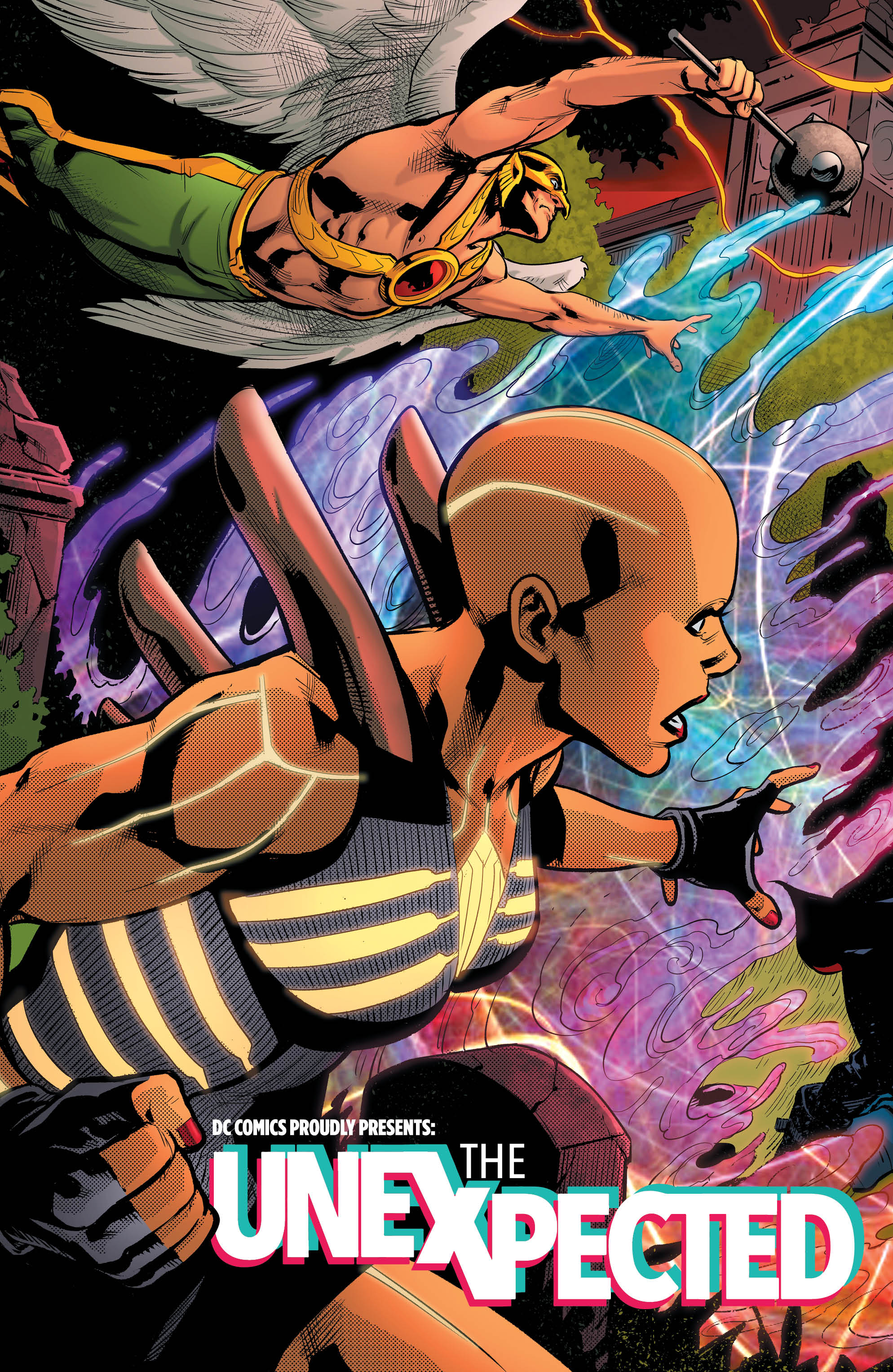 A full-issue final battle is always tough to review because the entire purpose is really the visual showdown.  There isn’t much world-building here and little characterization, but does it really matter when the multiverse is in this condition anyways?  I can appreciate a large battle issue once and awhile.  What is hard for me to wrap my head around, however, is the treatment of a character like Alden Quench.

Quench is one of the most intriguing original characters I have seen in recent memory.  He is a bad guy that serves others, but only for the benefit of himself.  He has done many evil things on the behalf of others but for his own benefit, and Quench is aware of all of this.  He has aided multiple of the most powerful individuals in the multiverse and survived a long time doing so.  I find there to be very few characters like him, but I can not understand why he is treated the way he is.  He is killed and revived only to be killed again when to me, he showed a lot of promise even outside this series.  I hope the last issue reveals that this is not the last we have seen of the Bad Samaritan.

An epic final showdown that everyone is sure to remember with unbelievable art from Ronan Cliquet, Jeromy Cox, and Carlos M. Mangual, but some confusing treatment of a promising character in Alden Quench.