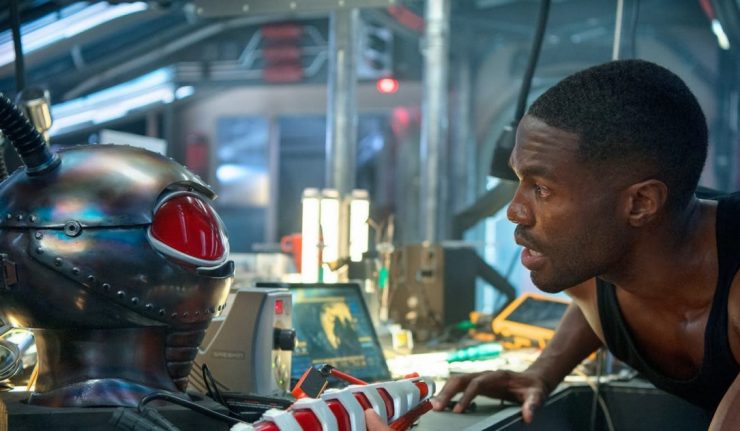 Actor Yahya Abdul-Mateen recently sat down for an interview with ComicBook.com to discuss his experiences while playing Aquaman’s nemesis Black Manta during the making of the film. The actor discusses the challenge in wearing the costume as well as what it was like to be challenged by director James Wan during shooting.

If you’ve seen the Aquaman trailers or have been lucky enough to have caught an early screening, you have by now gotten a good look at one of the movies villains in Black Manta. The bulky, black, costume was a challenge for Abdul-Mateen to wear let alone act in.

Though it was tough to wear the costume, the actor persevered and embraced the challenge the costume brought to his performance. Abdul-Mateen did offer some words regarding how difficult it was just to have the helmet pointed in the right direction among other things. He explains:

“When you first put [the helmet] on it’s not very intuitive […] You think you’re looking straight and you’re actually looking up. And then you have to look down in order to look straight and you kind of have to muscle it around. What I always say is that you have to tell the suit what to do. You can not let the suit wear you, because it will. You have to wear the suit. But once you do that, man, you step into that thing and it’s just on and cracking from there.”

During the course of filming, Abdul-Mateen had to really dive deep (pun intended) and cut loose during filming at the request of the film’s director James Wan. The actor explained how Wan was constantly challenging him for “more”. He stated:

“It’s interesting, I brought one thing to the table and I turned it into a place that was real. It was real for me and then James [Wan] said ‘Hey, more.’ I said, ‘For real?’ He said, ‘Yeah.’ And I do more. And he said, ‘More.’ I said ‘Really?’ I said, ‘Okay I’ll give more.’ And he said… he comes back, ‘More!’ I’m like, ‘Okay, well now I see what kind of movie we’re making,’ but when you’re doing it like that, it really… every time you have to take it a step further, you have to root it in something that was more real. You can’t just push for it. You have to say okay, well let me dig deeper, dig deeper, dig deeper. And then eventually you make something that the characters can see, that the audience can see and experience on a epic scale, but that they can also relate to, relate to the size of that truth.”

No spoilers here but many of those who have seen the movie were pleasantly surprised by Abdul-Mateen’s performance, but of course, you can make up your own mind when you see it.