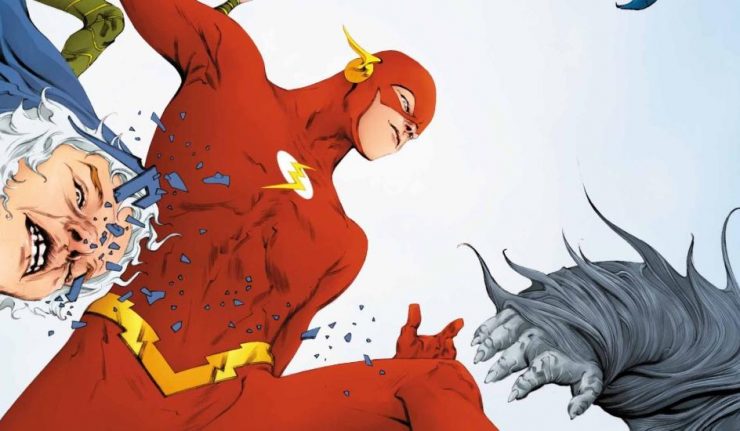 The Flash tracks down a new user of the mysterious Sage Force, a young Zandarian spy named Bashir (a.k.a. Psyche), who’s just starting to understand his newfound abilities. Here’s hoping he’s a quick study, because the Flash needs his help against the dual threat known as Gemini, who wants to steal both the Speed and Sage Forces! And whose side is Power-house on when the Strength Force agent shows up to flex her muscle?

Barry and Iris’ quest to discover the secrets of the Speed Force and the other Forces has led them to another of DC’s fictional countries: Zandia. Zandia is a European nation first introduced as the home of Brother Blood in New Teen Titans, but now serves as a haven for supervillains.

The idea of a country that shelters supervillains is interesting and provides some intriguing story possibilities across other DCU titles. Barry doesn’t want to spark an international incident by being seen as the Flash, so it looks like superheroes are persona non grata there, making it a potentially explosive setting.

The new character Psych is a powerful new addition to the DCU. The Sage Force gives him an array of mental powers that he has is still learning. In an interesting twist, it appears that while he isn’t really a hero, he’s not quite a villain either. He commits villainous acts such as thievery and blackmail but he targets supervillains. As he puts it, “I’m like a better version of Robin Hood, except I keep the money for myself.” He falls somewhere between hero and villain, but his basic motivation of greed and propensity for manipulating others seems to put him closer to being a villain.

But despite this, he still has no problem handing Barry and Iris over to Gemini, who we discover are using the four forces to extend their lives. They intend on draining the avatars of the Forces to gain immortality. Unfortunately, this means that they betray Psych, so that they can drain his Sage Force energy as well.

I don’t see much to complain about this issue. The story does still seem to be somewhat rushed. Both Fuerza and Psych are interesting characters that I wish we could take more time to get acquainted with before Barry pushes forward to the next stop on his quest. And a quick-paced storyline does suit a speedster character.

The Force Quest has been an exciting ride, which seems to be getting close to its conclusion. Hopefully the conclusion lives up to the excitement build up so far.