80 Years of Batman – Batman and Me-go Way Back!

Ever wondered when you first met Batman?  We know the world first met him in Detective Comics #27 cover dated May 1939.  But, everyone has their own individual story.  Very few people are going to be able to say it’s in that first appearance, but there may be a few.  Each of us probably has a unique anecdote about it.  However, it may not be easy to recall it immediately.  What clues can you put together in your memory to shed some light on this?  This is my story…

It’s hard to remember one’s very first comic book, and while I probably got a Mickey Mouse, Donald Duck or Bugs Bunny, the first important comic book I ever got as a child was Detective Comics #440. I had yet to turn 4 years old and I most likely also got Wonder Woman #211 on the same day. Both are cover dated May, 1974 and are 100 page giants and both exist in my collection in the same condition; the first part of each issue is ripped off and lost to the ages. It’s hard to say what happened to the first part of the books, exactly, but one can imagine what a child of nearly 4 might have done. 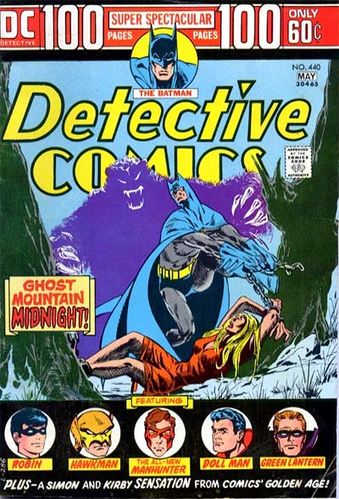 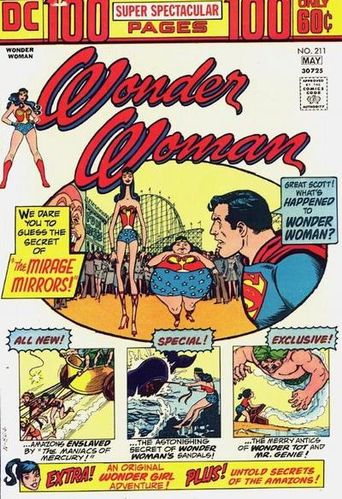 These books have always been curiosities in my collection. The Wonder Woman book didn’t get a lot of looks until much later, but as a boy and a teen, I was fascinated with that Detective issue. The lead Batman story was missing, but the rest of the book contained a partial Golden Age Manhunter reprint by Simon & Kirby, a Golden Age Green Lantern reprint by Alex Toth, a Golden Age Doll Man reprint and a Silver Age reprint of Hawkman #3 drawn by Murphy Anderson. The last two stories were a Silver Age Batman story recounting the story of the Outsider and Chapter 4 of Archie Goodwin and Walter Simonson’s Bronze Age Manhunter epic. This of course was still in its first run in 1974.  As a young boy I was perplexed at how the two Manhutnter stories were supposed to go together. Additionally, I was also confused by the Doll Man whose powers were so like the Atom and this blonde headed Green Lantern who looked nothing like the other Green Lantern I’d seen. At least I could count on the Batman reprint, but what a bizarre tale- “The Inside Story of the Outsider.” 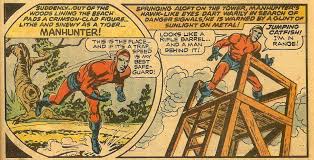 As I got a little older, I realized what a gem of a comic I had. When I finally learned about the Golden Age of comics, and learned of the importance of creators like Joe Simon and Jack Kirby, I took another look at the reprints and saw them again for the first time. The Manhunter story features S&K in their prime. I’ve wanted a reprint of all their Manhunter stories for years. About the same time, Alan Scott, the Golden Age (blond headed) Green Lantern became one of my favorite Earth-Two characters and I was excited to recall that there was this reprint in that book as well. It would be even later that I learned of the importance of that story’s artist, Alex Toth. Of course, the Hawkman story by Gardner Fox and Murphy Anderson is brilliant and a high water mark of the Silver Age. To this day, it still surprises me that I have a chapter of the Goodwin/ Simonson Manhunter epic. I would eventually track down a complete copy of the issue to read the Batman story that opened the book. It shouldn’t be surprising that this issue provided a lot of wonder to a boy in the ‘70’s and ‘80’s. It also shouldn’t be surprising that it was a Batman comic, but how many issues had such interesting and significant reprints? This and Wonder Woman #211 are the two oldest comics in my collection that I know I got off the stands. I did not get these later once I had started collecting. Was this my first introduction to Batman, though? 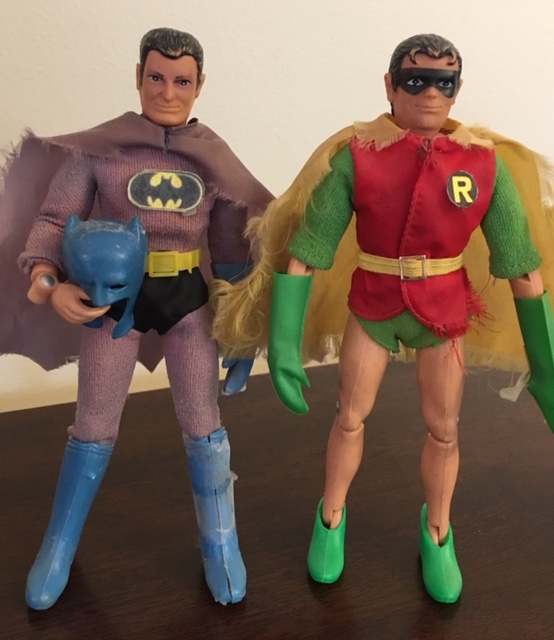 In 1972, Mego Toys launched their World’s Greatest Super-Heroes action figure line with a test for Christmas at a couple select locations. This test featured four figures: Superman, Batman, Robin and Aquaman. Batman and Robin in this first run were produced with unique masks. Robin, now known as Removable Mask Robin, came with an easily lost and or broken mask that overwhelmed the figure’s head. It was soon changed to a painted mask in the same shape, but looked much better painted on Dick Grayson’s face. Batman, now known as Removable Cowl Batman had a rubber cowl that slid down over Bruce Wayne’s head and was very interesting, even if it didn’t always fit right, his eyes never quite high enough for the eye holes in the cowl. So, what’s the deal with this? Well, as a child of the ‘70’s I had a lot of Mego super-heroes. Guess who I got first? That’s right- Batman.  And, not just any Batman. 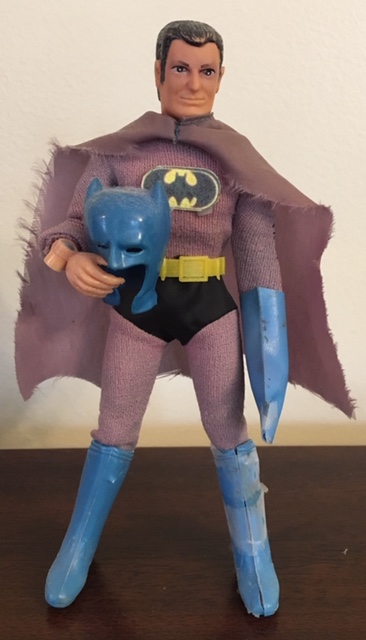 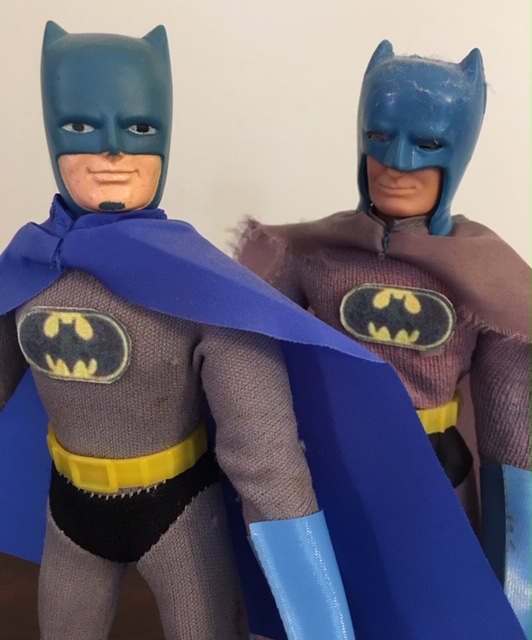 Sometime in 1974, Mego changed their Batman head sculpt to a molded cowl version. This not only made for a more concise figure, without an easily lost accessory, but it became more kid friendly, as the Removable Cowl version was definitely a bit darker and ominous than the happy smiling Molded Cowl version. Since I didn’t live in the area where I would’ve had access to one of that test market during the Christmas of 1972, it stands to reason that I got my Removable Cowl Batman for Christmas 1973. I have pictures! It couldn’t have been later, because the Removable Cowl was discontinued before Christmas 1974. This predates that issue of Detective Comics #440 that probably hit the stands in March or February of 1974. So, perhaps my first exposure to Batman was the Mego action figure? However, why would my parents buy me this if I had no previous exposure to the character? 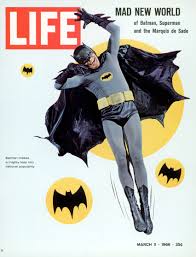 In 1966, four years before I was born, there was a television phenomena- Batman! Starring Adam West and Burt Ward, this television series chronicled a campy version of the Caped Crusader and his sidekick, Robin, the Boy Wonder. While a far cry from his initial noir-inspired origins, this television show was a hit because it was able to be enjoyed by parents and kids alike, even if for very different reasons. Though it only lasted three seasons, it was popular in reruns in the early ‘70’s, even in the afternoons when kids were coming home from school. I have very specific memories of this on channel 18, WCCB in Charlotte, NC. Is this my earliest Batman memory? 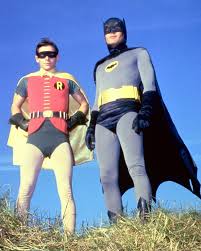 I have many memories of other Batman toys and comics from my childhood, but the Mego figure and that issue of Detective Comics are the only ones I can come close to pinpointing with a date. However, it stands to reason that I would’ve seen a rerun of Adam West and wanted a toy and comic. As a kid, different incarnations are indistinguishable. As an example, I specifically remember playing with my Mego Spider-Man while watching reruns of the Spider-Man animated series that originally aired in 1967. It’s not hard to imagine that the Batman ’66 TV show led to an action figure and subsequent comics.

As you can see, Batman and Me-go way back!