“Let It All Out.” In the previous issue, Damian received a beating at the hands of his former mentor Jason Todd; A.K.A. The Red Hood. Now the boy wonder must come to terms with the fact that he’s no closer to discovering the secret of The Other, and that he’s failed in his mission. We also see D’Jinn coming clean about her past and Emiko trying to help Crush with her rage. Roundhouse and Kid-Flash aren’t left out either, as Wallace visits the Wu residence for a family meal that will stick in readers’ memories for a long time to come. 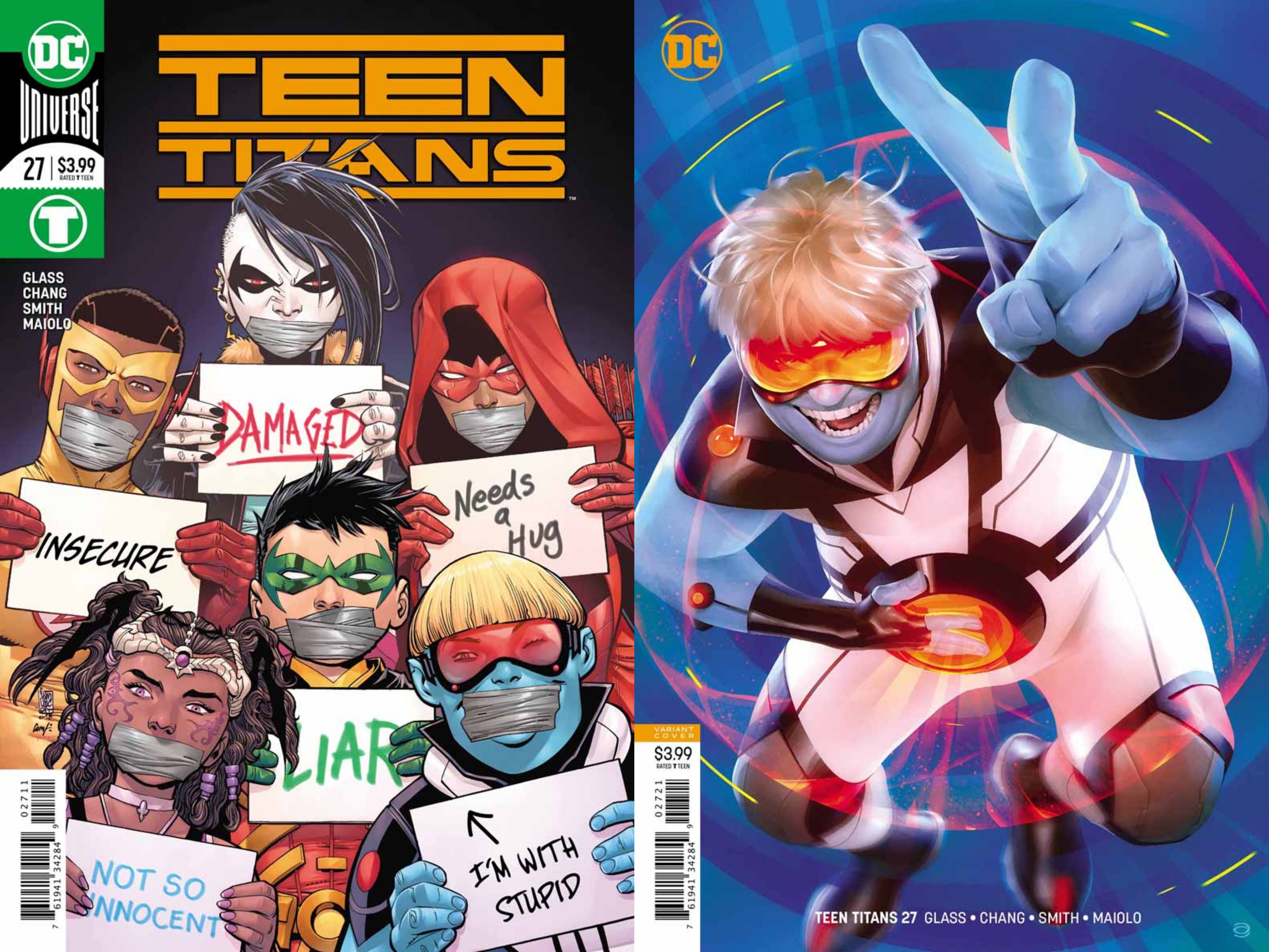 Adam Glass has written some really great character pieces in this issue, and I love them all. He’s also been very clever in revealing enough about D’Jinn to gain the reader’s sympathy, but without taking away any of the character’s mystery. I’ve been suspicious of her from the start, and while this “Origin” story has helped allay some of my fears, the way Glass has presented the tale still leaves me with questions. I want to believe D’Jinn, but something about her confession still doesn’t ring true.

Emiko’s interaction with Crush was also extremely entertaining and enlightening. I’ve gone on record several times, to say that I didn’t think we needed these new characters, back when this creative team took over Teen Titans. I am now as in love with Roundhouse, Crush and D’Jinn as I was with Robin, Kid-Flash and Red Arrow.

The meal at Roundhouse’s home with his mom and Kid Flash was one of the funniest, most real and heartwarming segments I’ve read in an action superhero comic in a long, long time. Mrs. Wu is as real a mother as my own, and there several moments during these scenes where I was looking at KF, Roundhouse and his mom, but was seeing myself as a teen, sitting around the table at home. Brilliant.

Speaking of brilliance; once again the art team of Bernard Chang, Cam Smith and Marcelo Maiolo have delivered. I felt Damian’s physical agony on the first page. His grimace, and the way he was lying in the fetal position spoke volumes. No groans, moans or mumbles of pain were required. The emotional distress he feels at the end of the issue is every bit as real.

Cam Smith does a fantastic job inking Bernard’s pencils. There have been times when I haven’t liked other artist’s inks over Bernard Chang’s work, but Smith’s are so good, I actually got more than two thirds through the book before realising that Mr. Chang hadn’t handled the issue solo.

Marcelo Maiolo is a hugely talented color artist. Check out the lighting on page one, for example. You can feel that the sun is rising and lighting Damian from the feet up, as his lower half is more brightly lit than his head and torso. Then look at the shadows from his window falling over him, and the wrinkles on his tunic and bed-sheets. Wow.

Rob Leigh, the letterer who never sleeps, also delivers some great work in this issue. The “Drop dead” on the wall of Crush’s room is a great touch. I haven’t loved reading two pages of characters chatting, featuring three people just sitting around a table and having a meal, in a long time. Adam Glass wrote a ton of dialogue for this scene, but Rob lays it all down and makes it fun to read. His positioning of the caption boxes throughout D’Jinn’s tale, which doesn’t have set panels in the traditional sense, are also brilliantly laid out, helping the eye follow the story, easily and organically. 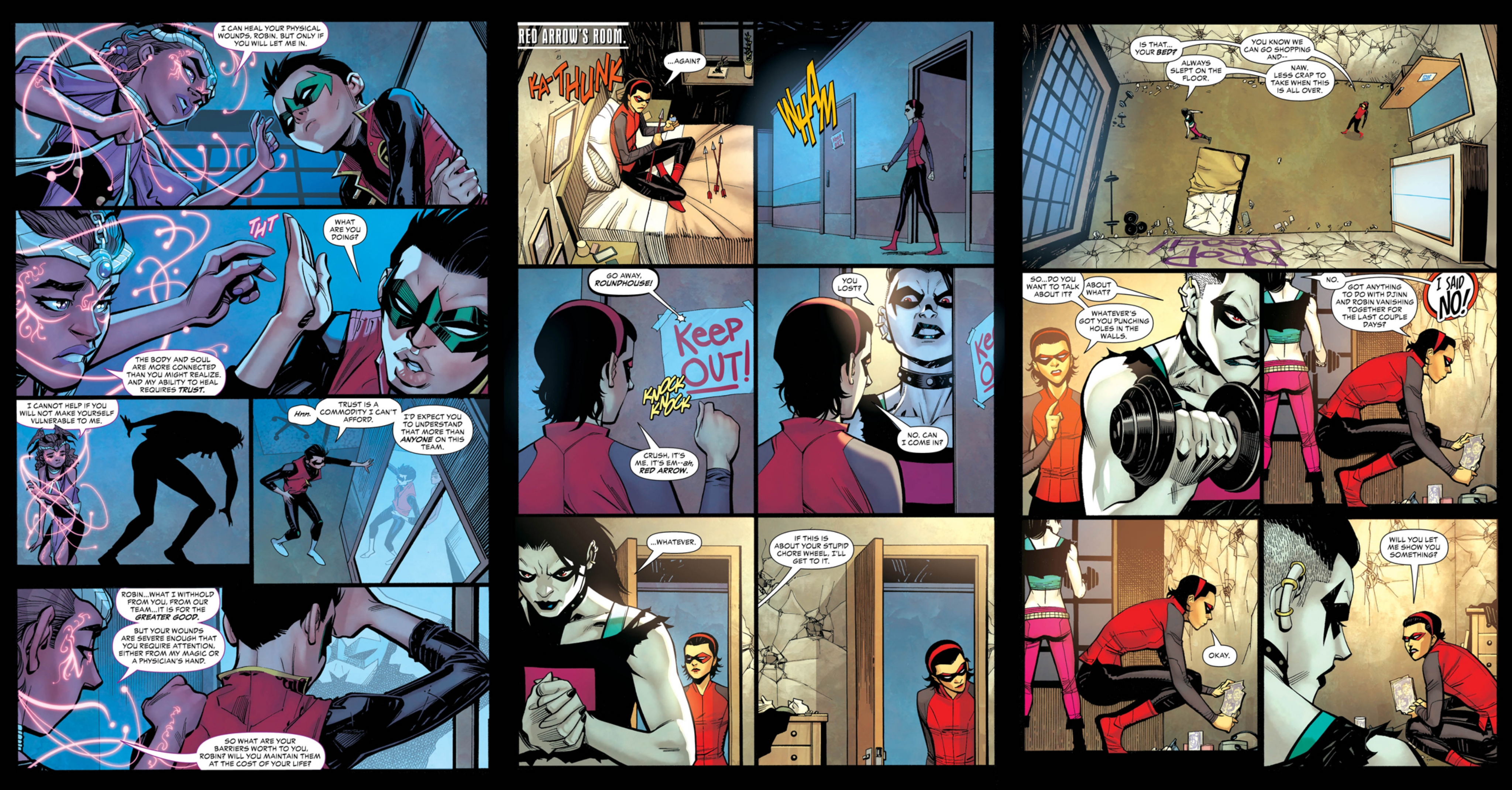 Some readers may not like character chapters, and there was no real action to speak of in this issue. I’m not one of those readers. This comic is funny, entertaining and emotional. I don’t need twenty pages of explosions and flexing muscles to enjoy something as well crafted as Teen Titans #27.

Ten issues in and I’m loving Adam Glass’ work on this series. Add in some terrific art, and I am a very happy reader. Next month’s issue is part of a crossover with Deathstroke, so any fans who may have missed action this time around, are sure to have their hunger sated by the next story arc.