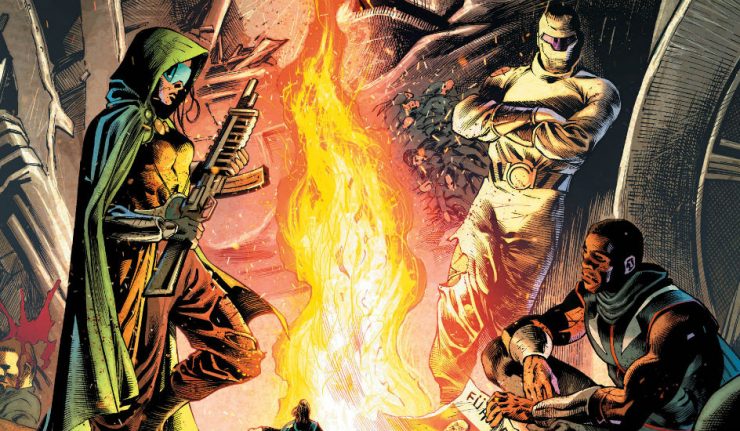 Summary
Issue #3 of this Maxi-Series opens up with the story of the death of Adolf Hitler on Earth-X, which comes right out of the execution of the Freedom Fighters in 1963 and his insistence that Uncle Sam be found, because as long as Sam lives, America lives!

The action jumps to the present as the new Freedom Fighters prepare for a cyber attack mission, but not before we learn a bit about Phantom Lady and Black Condor’s pasts, which in turn fleshes out this world a little bit more.  Not only do we learn that segregation never ended, but ramped up under the Nazis.  Phantom Lady, it turns out is the daughter of a Nazi sympathizing lawyer – an interesting twist on the original Phantom Lady being the daughter of a U.S. Senator.

The mission is designed to get the team access to the Nazi’s digital infrastructure, which among other things allows the FF to hack their broadcasts which they do immediately by playing Irving Berlin’s “God Bless America.”

At the residence of the Fuhrer, the plastic man who in last issue’s final pages sought an audience with Adolf Hitler II gets that face time.  He explains that the FF are trying to resurrect the spirit of America by getting the people to believe again, thus waking Sam.  Reluctant to use Overman to combat the Freedom Fighters, Adolf II calls on his son, Addie (Adolf III) to spearhead his response.

Positives
As this story unfolds and the FF and world of this Nazi regime, it is significant that the pacing and balance in the story keeps the reader interested as just enough is revealed to develop both character and world without giving it all at once or bogging down in exposition.  As things are slowly revealed about the FFer’s themselves, they become more real.  Additionally, incorporating Hitler’s death into the narrative is particularly effective.

So far, issues #2 and #3 have highlighting different FFer’s abilities.  This issue shows Black Condor in action and he packs some really impressive moves as he takes on a jet fighter group above the skies of Chicago.  Hopefully, each Fighter will receive similar treatment.

When dealing with Nazis, it’s automatic to imagine the world of World War II, but it makes sense to see modern technology in use which reminds the reader that this is not a period piece.  It encourages the reader to consider what the other Axis powers, Italy and Japan, are like in this world.  How does Japan’s technological development compare to our own world?  There’s a lot of world to explore!

Negatives
No real negatives, just a fear that there’s so much to explore about this world and characters that 12 issues won’t be enough to contain it all!

Verdict
This well paced series continues to introduce the Freedom Fighters and their world to the reader.  While Sam doesn’t make an appearance his presence is felt.  It’s an exciting thing to see a comic find the ideals of America and explore them without seeming preachy.  This issue may not lean into that as much as last issue, but Berlin’s “God Bless America” indicates that the Spirit of America is an important theme underlying the Freedom Fighters themselves.