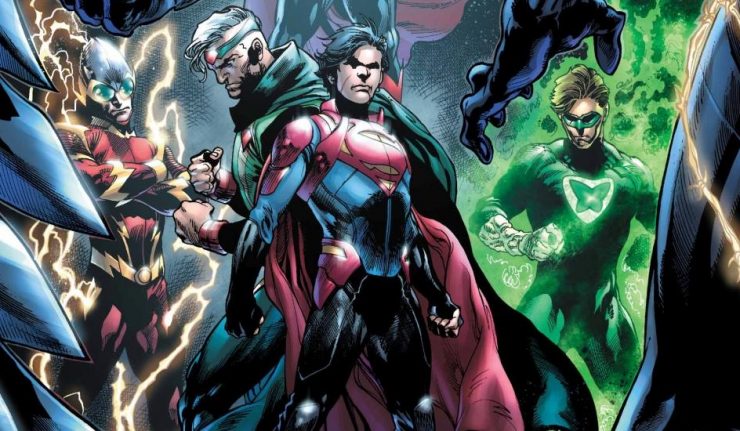 The secrets of the house of El are revealed as the Unity Saga continues! Traveling through space, young Jon Kent has faced everything the universe could throw at him, but after an accident sends him and his grandfather Jor-El across dimensions, the new Superboy comes face to face with a terrifyingly evil version of his own father: Ultraman and his horrible version of the Justice League, the Crime Syndicate! Find out what happened to Superman’s father and how Jon made it back home from this strange and crime-ridden alternate world.

I really hate Bendis’ decisions regarding Superman’s family, especially when he sent Jon Kent on an extended absence from the title, then have him reappear somehow several years older than he had been just weeks before. The maddening thing is that Bendis is making Jon’s account of his missing years such a good story.

After finding himself trapped on Earth-3, Jon is kept prisoner in a volcano by Ultraman. We get a deeper look at Superman’s evil doppelgänger’s psyche. That world’s Clark Kent has quite the fascinating, yet disturbing personality. Yet despite his many problems, something moves him to keep Jon alive, and use Jon as his secret confessor.

And the awkwardness Jon felt during this time is palpable. Imagine hearing the innermost secrets and shames of a distorted version of your own father. Plus Jon must be left wondering if some of these secrets are reflections of his own father’s darkest and most private thoughts.

I also find the dream sequence at the beginning of the issue fascinating. Bendis has brought back the pre-Flashpoint idea that Superman doesn’t physically need sleep, but has a psychological need to dream. The idea that if Superman’s dreams might intrude on his waking consciousness sounds both dangerous, but intriguing. There is definitely some tantalizing story potential in that.

But the content of the dream is also somewhat interesting. Given the detail, and how it is consistent with earlier dreams, I wonder if it’s maybe a prophetic version of a possible future. It definitely seems to be hinting at a future threat that Clark and General Zod may find themselves forming an alliance to combat.

Also, I notice that in the future, Jon does not yet seem to be an adult in that future, but it appears that enough years have passed since the present for him to have a teenage sister. Could it be that Jon will at some point be de-aged back to his proper age – or even younger?

Next issue, it appears that Jon will continue his story with his encounter with Earth-3’s Superwoman. What is sometimes forgotten is that while Superwoman is in some ways her Earth’s version of Wonder Woman, she is not Princess Diana of the Amazons, but is that world’s Lois Lane. If Jon thought his father’s dark reflection of his father was disturbing, now he has to deal with a twisted version of his mother.

I’m not sure I quite follow how Jon escaped. I’m no geologist, but I don’t think that’s how volcanoes work. Or maybe the laws of science operate a little differently on Earth-3. Anyway, I can accept that Jon needed to get away for the story to progress, so I can overlook that it didn’t seem to make any sense.

Also, while I understand Jon’s idea that the Crime Syndicate’s headquarters might hold the key to getting home, my first thought was that he should try to seek out the help of that world’s heroes. Surely, there must be some doppelgänger of the DCU’s villains present on that world acting as a resistance force against the Crime Syndicate. Why didn’t occur to Jon to look for them?

I really want to hate Bendis’ Superman, but he’s making it so difficult by writing engaging stories that are fun to read, despite my apprehension about his overall direction. I don’t know what Bendis’ endgame is, or whether I’ll like the status quo that results for the Kent family, but I am enjoying the ride so far.