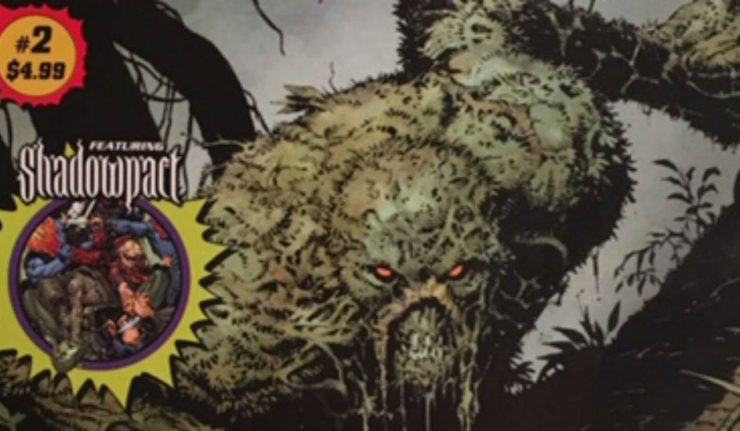 This story begins in the swamps of Louisiana with two college students on a canoe trip sharing scary stories.  The girl promises to scare the boy…by recounting two alternating versions of Alec Holland’s transformation into the Swamp Thing.  She gets the name and basic facts, but isn’t sure whether to believe that he’s Holland reclaimed by the vegetation, or vegetation that believes it’s Alec Holland.  She even introduces her story with the title “Saga of the Swamp Thing,” which is of course the long-running title that debuted in 1982 and would come to feature the work of Alan Moore and many others on the character.  Just as the boy is about to share his story and reveals a mysterious red mark on his chest, the couple are interrupted by a frightening female form….

Briar and Swamp Thing are on the scene the next day trying to discover what happened to the college students.  Swamp Thing is talking to the grass and Briar uses her witch-eye to see what she can learn.  Here we get a little more on Briar’s backstory, she had to gouge one of her own eye’s out in the past and it has resulted in her ability to “see” things not normally seen.  This time she sees blood, and more blood and that it is connected to the coming of the Barren.  They soon end up coming face to face with that “frightening female form” who calls herself Ms. Ravenmocker and appears to be connected to The Red. (That mark on the boy’s chest?)  Briar and Swampy end up following Ravenmocker to a collections of bodies.

With the confirmation that Briar is same nameless character introduced Swamp Thing Halloween Horror Giant #1, this story now attains a cohesiveness and heightens the importance of the conflict.  Also, the slow reveal with Briar is interesting as the reader seems to learn more about her just as Swamp Thing does.  These two make an interesting pairing and the mystery that surrounds her only adds to their chemistry.  There’s a lot of potential with the two, not necessarily as a romantic couple, but as a horror seeking pairing.

The flashback to Swamp Thing’s origin is fun and interesting.  The two different urban legends echo the two different origins for the character from the comics.  This is again seen in the use of the logo and title Saga of the Swamp Thing It’s a fun Easter egg for longtime comic fans.

Ms. Ravenmocker as an agent of the Red is a welcome addition.  It not only connects with the Animal Man reprint, but also indicates how large an impact the Barren is having on the Earth.  It’s a neat twist that the avatars are escaping have something of which to be afraid, usually, the avatars are inducing the fear.

The art this time is by Joelle Jones, and she doesn’t disappoint.  There’s no lack of emotion in her characters and she executes the suspenseful and horrific moments equally well.  She’s aided and abetted by Trish Mulvihill on colors.  She captures the lush scenery with a well chosen palate, and keeps lots of greens and oranges to enhance the tone of the story that cements it as a Swamp Thing tale.

Lastly,the introduction keeps this story rooted in the horror genre as it shows the disappearance of two college students in a scene that could’ve come from a 1970’s issue of House of Mystery.

No real negatives as the Swamp Thing and Animal Man reprints are top-notch and the new Swamp Thing story is slowly building what seems to be a classic in the making.

There’s a real lack of the horror genre in DC’s line of comics.  Swamp Thing Giant is a welcome addition.  Seeley has a big story going on here and he’s using the format the Giant comic provides well.  It unfolds just enough to keep the reader coming back for more.  The art by Joelle Jones is great this issue, a strong follow up to last issue’s story by Mike Perkins.