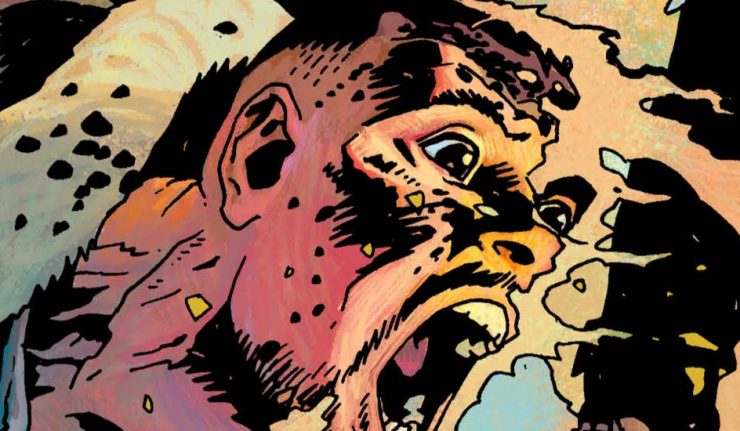 Wynn Morgan’s business rivals get wind of Agent Sheila Curry’s off-the-books investigation into the white nationalist leader, but things don’t go well at all when they try to make an illegal quid pro quo with the vengeful FBI agent. Meanwhile, Richard closes in on the murderer of Agent Watson, with help from the unlikeliest of allies.

I don’t like the interior art at all. Some of the colors are nice but the rest is very unappealing. The faces are ugly; no one seems to have eyes. The book looks its best when it’s in silhouette; that at least has a style.

Agent Curry’s conversation with the politician is strange. This guy essentially wants to make a deal that could take Wynn Morgan down and that somehow crosses the line with the chick who is doing an illegal under cover investigation that has already resulted in a casualty. She is consumed with vengeance unless it means having to work with a douche bag Democrat, which the book goes out of its way to make awkwardly clear. Then the law matters.

I don’t think there’s much of a story here. Richard doesn’t have much driving him. The mixed race background is interesting but nothing is done with it. And because he’s under cover, it’s difficult to tell when his dialogue is genuine or not. The character with the vendetta and motivation, Curry, spends the issue lecturing us about how Democrats are racist. There’s nothing grabbing me.

I really did not like this issue. The immediate turn off is the art which I think is weak. There’s nothing in terms of character or story that I find compelling. There’s some potential in the concepts but it’s not going anywhere.