This mammoth tome of Batman tales features a couple different kinds of stories, some of these stories feel like they are homage to the icon the Batman and the Batman Universe and others seem like they are supposed to be part of continuity.  Some manage to do a bit of both.

The volume opens with “Batman’s Longest Case.” The premise is that there’s been a case Batman’s been working on since his earliest days as a crime fighter.  Over the years it has presented more and more clues which lead him to something unexpected: induction into The Guild of Detection, joining longtime members Slam Bradley, Elongated Man (and apparently Sue Dibney), Hawkman and Hawkgirl, Martian Manhunter and Detective Chimp.

“Manufacture for Use” is the story of how Batman tracks down the gun that was used to murder his parents and his plans for its future use.  “The Legend of Knute Brody” is one of the best stories in the issue as it chronicles the life of longtime Gotham City henchman Knute Brody and is involvement with Gotham’s greatest rogues.  Incidentally, when Knute’s identity is revealed it’s not surprising he wasn’t much help to Gotham’s underworld.

“The Batman’s Design” is a wonderful “night in the life of….” story.  It’s a simple Batman tale, but executed flawlessly.  “Return to Crime Alley” revisits the theme of Batman returning to the scene of his parents murder made famous in the classic “There is No Hope in Crime Alley.”  Writer Denny O’Neil returns to Crime Alley with this story as well, with a different theme to explore this time around.

“Heretic” features Neal Adams returning to the Batman/ Ra’s al Ghul dynamic as we learn a bit about Batman’s past with the League of Assassins and the indelible mark he left on the organization from the inside.  “I Know” is a creative little tale about Batman and Penguin when they are old.  Penguin explains to Bruce that he’s known for many years that he’s also the Batman.  It appears that Cobblepot is really on to something and may be smarter than the Dark Knight.  That’s what Cobblepot says, at least.  It’s an effective twist as Bruce tasers him from his wheelchair.  It shows how close some of Batman’s foes have gotten, but they can never quite get him.

“The Last Crime in Gotham” supposes that Batman and Catwoman eventually marry, have a daughter and have a proper crime fighting family, complete with Bat-hound.  They find a murder scene that is part “goodbye” and “Happy Birthday” wish from the son of the Joker.  “The Precedent” really sings as it explores the reasons for and against Bruce taking on Dick Grayson as sidekick.  And it does so with a nice focus on character.  It’s got a throwback feel to it, as well.

“Batman’s Greatest Case” juxtaposes Bruce’s visit to his parent’s grave with a “Bat-family” photo.  It suggest that, despite the tragedy he’s managed to create his own family of which he’s proud.  The issue wraps up with “Medieval” the introduction of the video game character, the Arkham Knight and his view of Batman and Batman’s methodology.  No surprise they don’t see things the same way…continued in Detective Comics #1001. 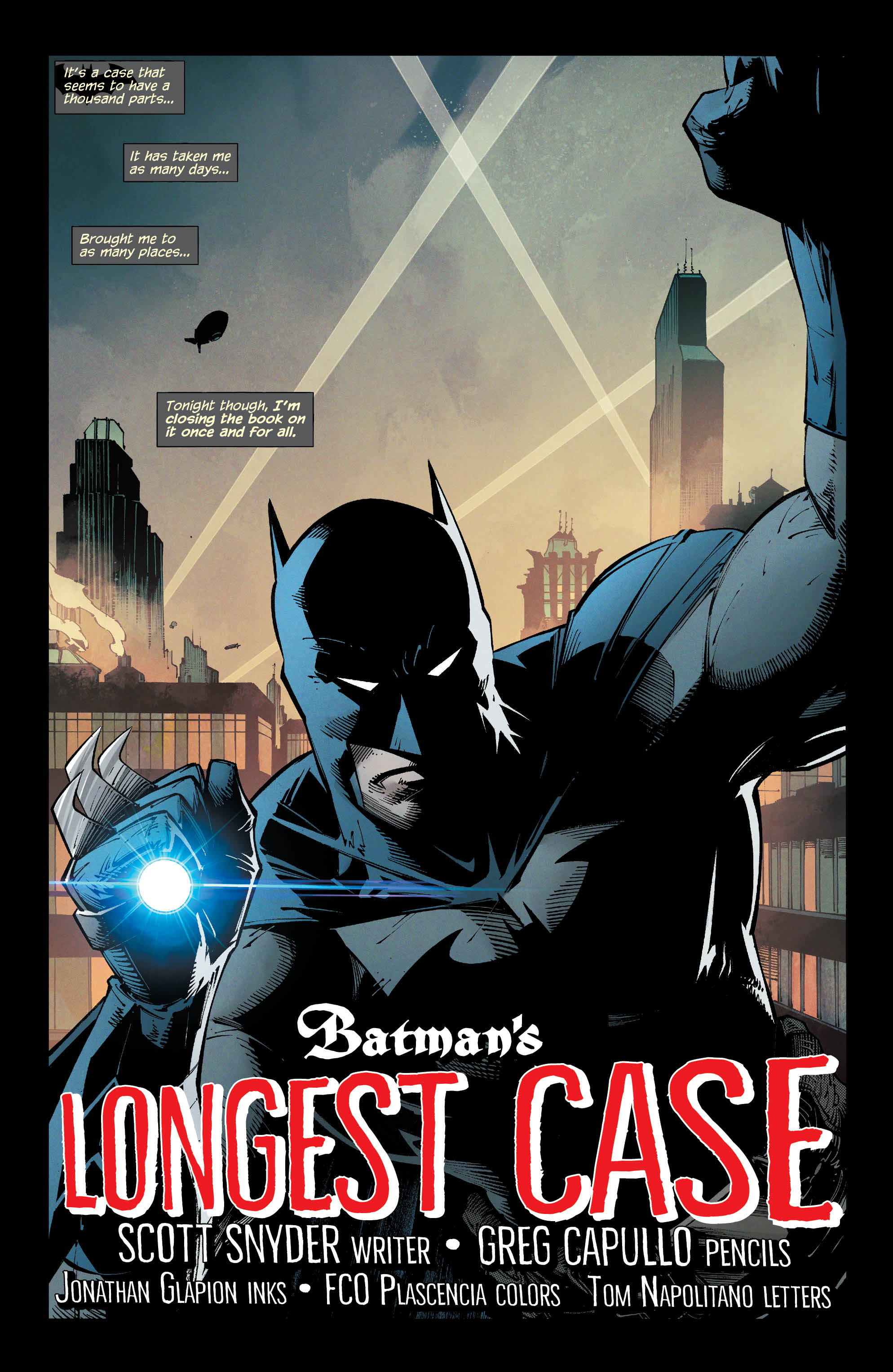 With so many stories there are a number of positives, and each story has its own upside.  Overall, it’s nice to see different takes on Batman featured and not just a single viewpoint.  Additionally, the art has more hits than misses.  It’s a true joy to see Dick Grayson is present and accounted for with no mention of “Ric” anywhere.  Hopefully, DC lets go of that misdirected notion.

The two best stories are “The Legend of Knute Brody” and “The Batman’s Design.”  “Knute Brody” is great.  The twist at the end really works here because it adds to the characters of Batman and family.  It also shows the team as a family.  It genuinely shows them bonding with each other over “Knute Brody” as well a showing how clever the whole thing is.  There’s a nice bit of humor as well as emotional chemistry behind the group.  The villains have no idea who Knute really is which makes the tale.  In “The Batman’s Design,” Bruce states,“If you don’t have a plan you become part of someone else’s.”  That really sums up how Batman approaches things, even on a run of the mill kind of night.  There aren’t enough “average night for Batman” stories anymore, and this one fills the gap nicely.  Cloonan’s artwork is great.  She nails the mood, atmosphere and emotions and storytelling with a flawless flow throughout.

“The Precedent” is beautifully drawn, and captures the young Dick Grayson emotionally and visually.  It makes a reasonable case for why Bruce brings Dick into the life while at the same time acknowledge the obvious drawbacks.  It is fun and uplifting and takes some of the dark out of  the Dark Knight.  It has a more “all ages” appeal reminiscent of a simpler time.  The last page is a super iconic poster worthy image of the Dynamic Duo.

“I Know” is another gorgeous story, this time drawn by Alex Maleev.  The Penguin almost convinces the reader that he’s got the drop on Batman and the approach is quite clever.  Bendis makes us believe the Penguin’s story could be true by the extent of the detail in the Penguin’s story. 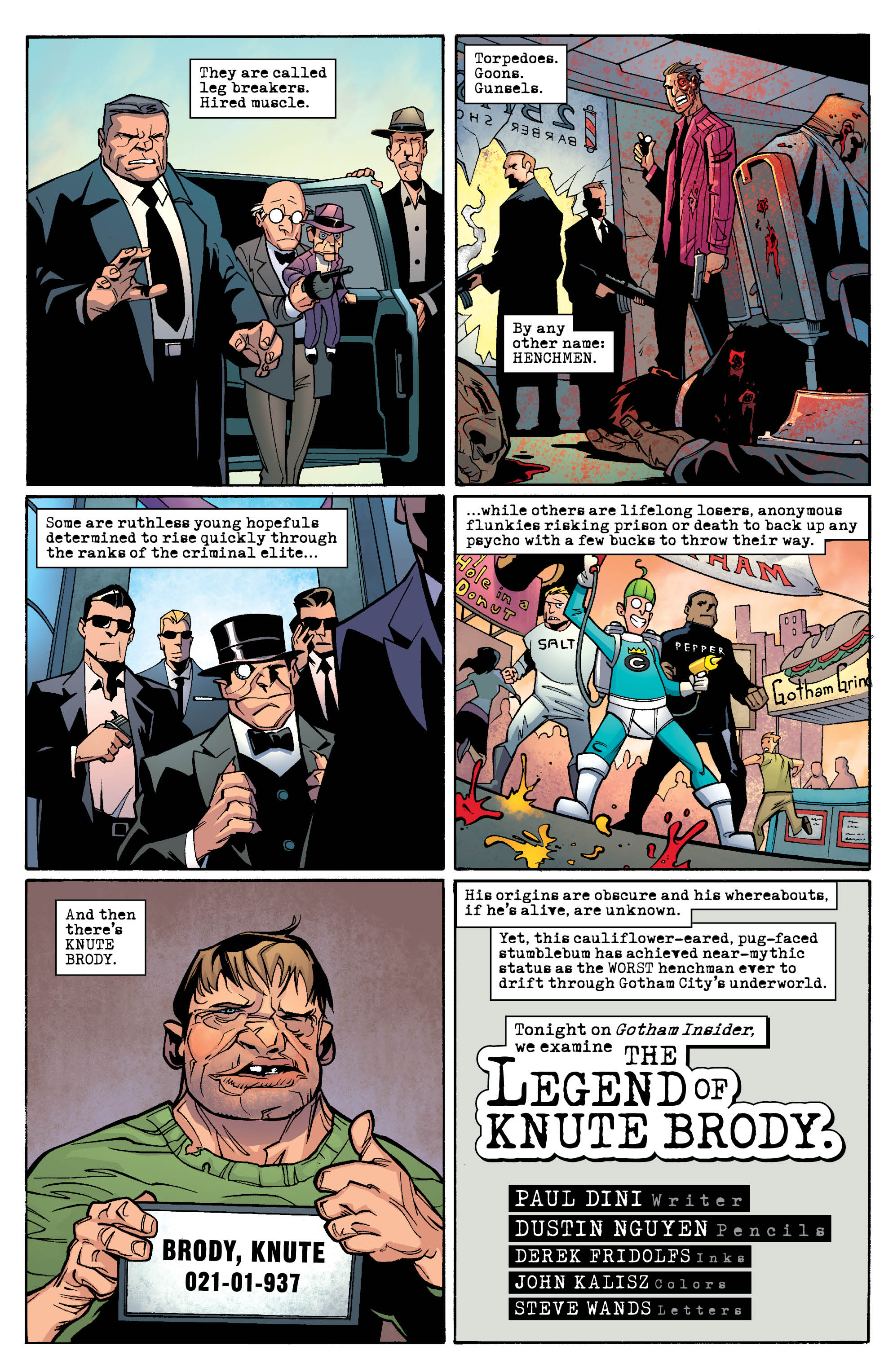 “Batman’s Greatest Case” is a thoughtful tale that’s depth may not be obvious on first reading.  While the Bat-family argues playfully, jibes with one another and discuss why they’re all on a rooftop waiting for the Batman.  Interspersed, King shows what happens next as Bruce takes the photo he’s taken of the entire family on the roof together and lays it at his parents’ graves.  As it sinks in it becomes quite emotional, as it becomes clear that Bruce is sharing the family he’s created with the family into which he was born.

The opening tale starts with a lot of promise and a heavy emphasis on Batman’s detective work.  It’s a nice touch when we see Batman’s purple gloves from his first appearance in Detective Comics #27 featured as Bruce narrates the beginning of the case recalling the earliest time in his career as Batman.  “Manufacture for Use” with its somewhat grisly premise evokes a feeling that this story came right out of the ‘70’s!  The yellow oval bat symbol is a nice touch visually.  I’m with Alfred, buying that gun is a bit odd, but Bruce’s use for it felt very ‘70’s inspired.  While it seems like it would’ve been better suited for him to keep it and end the story with a brooding somber Batman, the actual ending in keeping with the ‘70’s feel gave the notion that Bruce HAS moved on in some way and he’s a healthier Dark Knight.

The art in “Return to Crime Alley” is absolutely gorgeous.  Steve Epting really does a fantastic job with emotions and facial expressions as well as displaying some fine draftsmanship.  It may be the best drawn story of the lot. The shot of Bruce in the alley as a kid framed by his Batman image looking down is poster worthy and iconic.  As one might expect, there’s a little bit of ‘70’s feel to this story as well, and Epting does a great job of channeling some Neal Adams and Dick Giordano but never aping it.

Not everything hits the mark…the twist in “Batman’s Longest Case” took the story in a different direction than it initially pointed. The original direction was more interesting and compelling.  Especially if it was going to include lots of nods to moments in Batman’s career like the purple gloves from his first appearance.  It didn’t seem right that some of those characters would be in a group like that before Batman.  It was  a let down for the lead story. 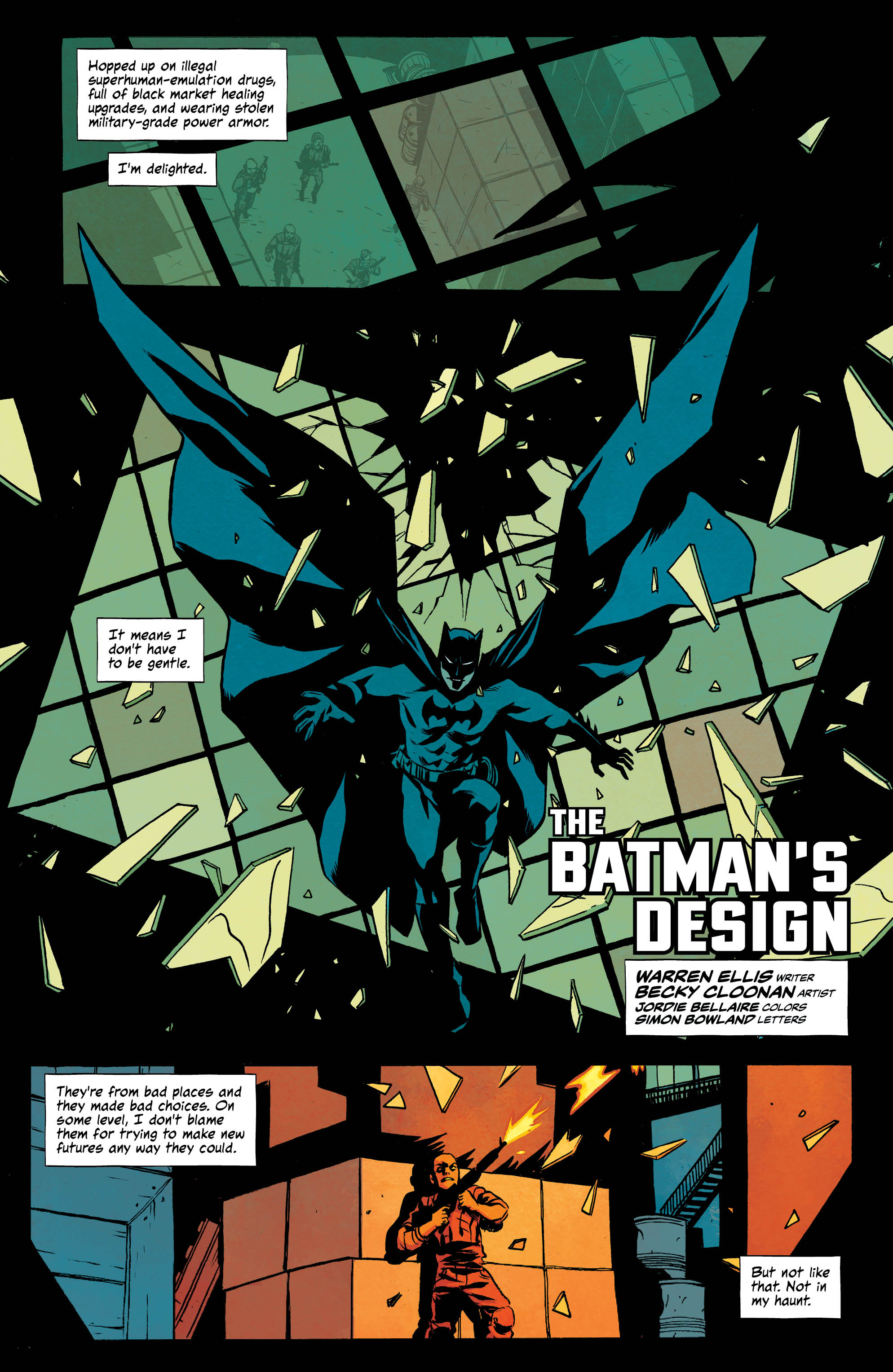 While some of the stories presented a more balanced and “lighter” Batman, “Return to Crime Alley” took the opposite approach.  Leslie Thompkins is horrified at Bruce’s methods as he prevents her from being mugged by some street toughs.  However, It doesn’t seem that Bruce’s actions were over the top to warrant Leslie’s reaction.  While I get the point, those punks deserved a Bat-beating.  It’s not like he was breaking limbs and such.

“The Last Crime in Gotham” is a bit off as well.  Kelley Jones’ distinctive artwork seemed a bit rushed and not as tight as usual.  The end felt really award as Bruce had his birthday cake alone in the cave instead of with the family that was with him the rest of the story.

It’s a little disappointed that Batman’s relationship with Jim Gordon isn’t covered in any of the stories.  Gordon has been a big part of the feature and it seems appropriate that he would’ve been included in more than a pin-up. 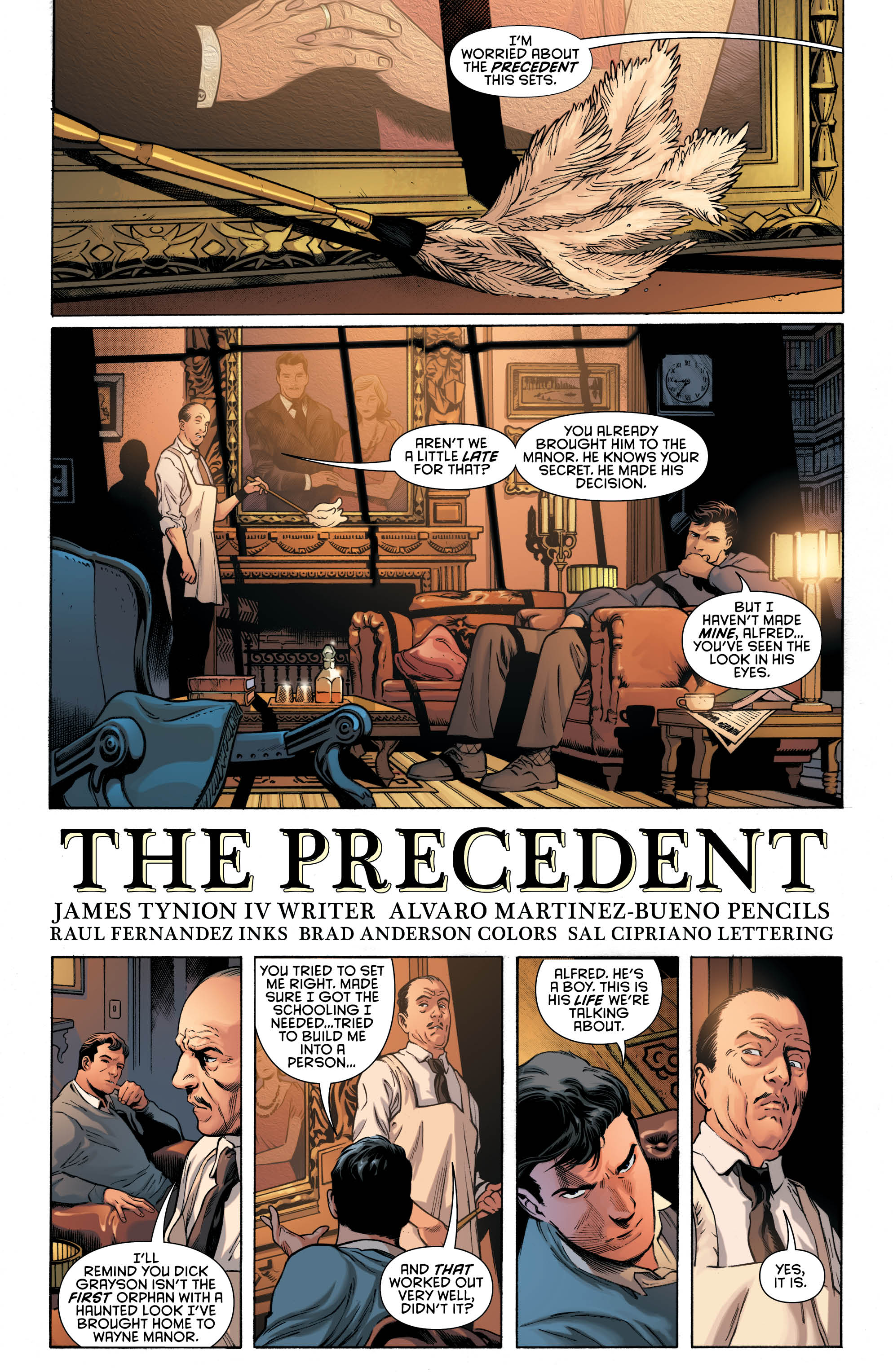 There’s a lot to digest with this issue, and there a few really great stories along with some good ones.  There are only a few that seemed a little odd or just didn’t quite hit the mark for a celebration issue.  It’s a solid anniversary issue for celebrating the Dark Knight, but not perfect. However, “The Legend of Knute Brody” is worth the price of admission alone.  There’s a lot to enjoy, as well as different types of stories presenting something for everyone.  And, “Medieval,” while not standing out by itself, does do a good job of whetting the appetite for the next arc in Detective Comics, which starts next month in issue #1001!