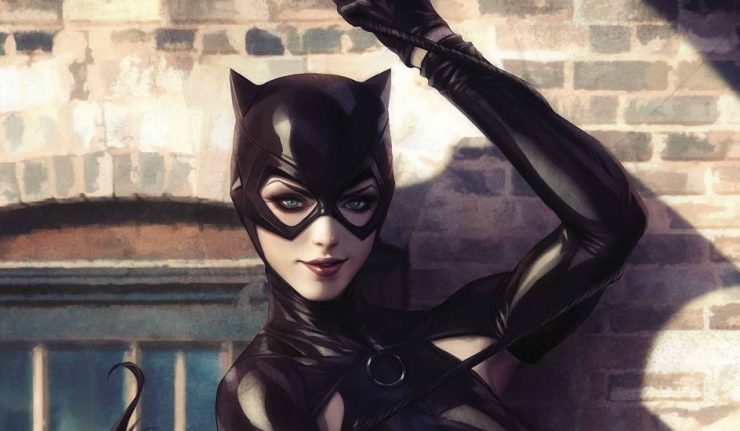 As someone who’s collected all the Catwoman titles going back to the Catwoman: Year One mini-series in 1989, through the brilliant ongoing Chuck Dixon/Jim Balent 1993-2000 run and Darwyn Cooke’s incredible “Trail Of The Catwoman” and “Selina’s Big Score” arcs of the early 2000s I had high expectations for Joëlle Jones’ new ongoing book. Although I’d only ever seen her work as a comic-book artist up until that point, having a talented female creator writing AND drawing the ongoing adventures of DC Comics’ number one female anti-hero really got me excited.

If you’ve held off on reading this series ’til now, let me strongly recommend this book. The story is intriguing and horrifying in turn, and the art is absolutely divine. Without giving away too many spoilers this series leads straight out of Batman #50, the infamous “Bat/Cat Wedding” issue. Selina has left Gotham City to try to make a new start in sunnier climates. Her adventures lead her into conflict with Raina Creel, the wife of the local governor. Raina is a murderer, gang leader and a genuinely nasty piece of work.

The strength of this story lies in how sympathetic Jones and her collaborators make Selina. After ditching Batman at the altar, many fans lost some of their love for Ms. Kyle. In this volume we come to like, and respect Catwoman’s “Job” as a burglar and thief by discovering what a real criminal and villain is, in the form of Mrs. Creel.

I particularly love how Selina hides her identity by wearing a mask over her face, while Creel’s actual face is her mask. If you hate how much makeup celebrities wear, and despair over airbrushed images of super-models in fashion magazines, believe me when I tell you that all of that pales to insignificance when compared to Raina Creel’s “Nips and tucks.” This woman is terrifying, and she’s even more ugly on the inside!

This book has made me a fan of Joëlle Jones, the writer. I came into this series already a huge admirer of Joëlle Jones, the artist. The pages attached to this review should help to explain why. Her art is deceptively simple, yet mind-blowing when examined in greater depth. The  facial expressions, martial arts movements and general body language of her characters is first-rate. Her gift of storytelling is so strong that we often get several pages where the art does all the talking, with no captions or dialogue at all.

What’s even more impressive is the fact that four out of six of the issues collected in this volume were pencilled AND inked by Joëlle. The excellent Fernando Blanco helped out with the art in chapters three and four, as did color artist John Kalisz. These two are no strangers to the ladies in Batman’s life, having handled much of the terrific art in Marguerite Bennett’s sorely missed Batwoman series. They drew and colored five pages in chapter 3 and all the flashback sequences for chapter four. Chapters 1, 2, 5 and 6 are ALL Joëlle Jones, with color by longtime collaborator, and terrific artist in her own right, Laura Allred.

Blanco and Kalisz’s pages are softer and colored more vibrantly than those created by Jones and Allred. The differences are quite strong to my eyes, and therefore a little disconcerting. I know that, creatively, this was perhaps done on purpose; Selina’s present is cold and scary, whereas the reminiscences into her childhood evoke warmth and happiness.

The art remains strong, though, so this is a minor quibble.

I have to say that this volume has a whole lot going for it. A tight, action packed script. Plenty of emotion; from fear, to horror and the rekindling of Selina’s relationship with a long forgotten family member. There’s also some very dark humor and a truckload of twisted irony. Letter Josh Reed kept the tone and flow of the book consistent, even with the change of art styles. Every member of the creative team delivered some great work.

I highly recommend this book, it’s a “Grown up” comic, so delivers on many levels. It’s not one I’d recommend to the kids, though anyone aged 15 and over should find something to love in its pages.