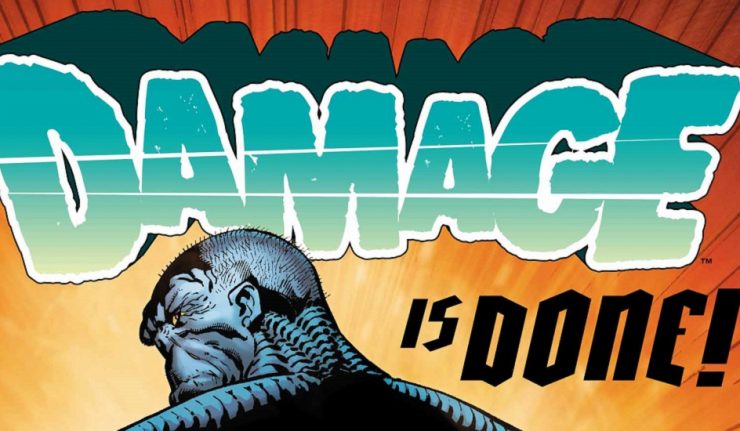 “You saved my life, and you saved Monster Rock.  You did it by balancing man and the monster.  Don’t much care what Bats or anyone says.  In my book, you’ve earned the right to on your own way.” – Congo Bill allowing Ethan/Damage to leave Monster Rock.

And with that quote, Damage is Done!  Aptly entitled for this last issue, Ethan and Congo Bill find themselves suspended over a lava pit in Echidna’s lair as she seeks to destroy both of them to become the ruler of Monster Rock.  Echidna tosses Congo Bill’s ring into the lava so he can no longer exchange places with the Golden Gorilla who he can control while using the ring.  Ethan turns into Damage, and saves the ring by breaking free and jumping into the lava.  Ethan controls Damage’s urge to crush the ring, and hands the ring over to Congo Bill who summons the Golden Gorilla.  Panel after Panel of the comic focuses on the fight between all the monsters of the island and the Golden Gorilla and Damage as they defeat all of Echidna’s monsters and magic.  Later, Congo Bill provides Ethan a boat to sail to North America and be released from Monster Rock as he has proven he can balance the sides of being Ethan and Damage when he needs to.  Ethan then sails off into the sunset.

In several of my reviews, I have repeated often that Damage doesn’t live up to the sum of its parts.  Super Serum created by Military to create a super soldier (Captain America?)?  A punch that could kill Superman (Doomsday?) but doesn’t hurt Batman (Bane?)? A one hour time limit on the powers (Dial H for Hero?)? And the duality of Ethan/Damage (Bruce Banner/Hulk)?  Too much gimmick and not enough story line.   The only positive is that Damage is Done!

Finally, Damage is ending its run and it should have.  This is a shelved character that needs to be one of those background characters in a battle scene in an episode of the JLA.  Seen but not heard!  Aaron Lopresti and Robert Venditti possibly had all of the aforementioned influences in their character building of Damage, but it is too recognizable as a stew that had too many overpowering ingredients?  Is that oregano?  Is it basil?  Too many things going on and not enough character development or a story that could be anchored with one of the Trinity (Batman, Superman, or Wonder Woman).

Damage is going to end up in the $1.00 rack with some other titles from years gone by.  I really had hoped this would have worked out as a “HulK” or “Doomsday turned good” character for DC, but I’m glad he’s sailing off into the sunset.  I hope he finds an island with cheap drinks and an easy way to get into a witness protection program.  He and We are better off with him gone!