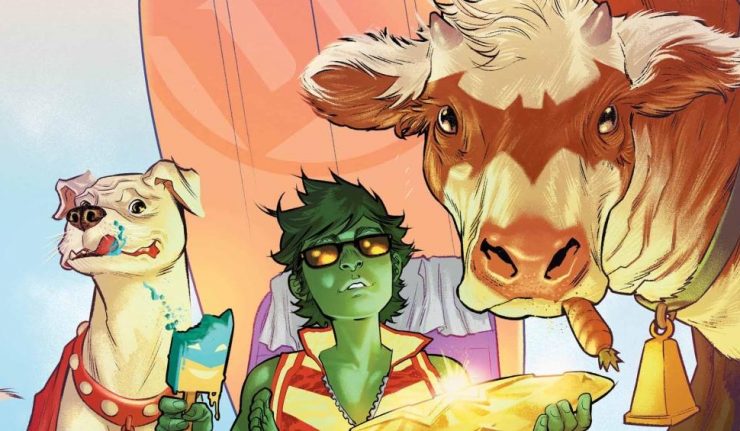 Dog Days of Summer #1: “Who let the dogs out?” DC does this summer as we unleash the beast within and join Krypto and Superman, Batcow and Batman, Wonder Woman and Ferdinand and many more for eight sun-kissed stories in this can’t-miss animal-sized spectacular!

First off, if you’re not a dog person, don’t let the title put you off. Other than Krypto co-starring in a story and Yankee Poodle making a brief appearance, Dog Days of Summer #1 doesn’t contain any other canine content. Instead, it has more of a general zoological theme, with the stories starring some of DC’s animal stars or heroes with an animal theme, such as Animal Man. There is even a story starring Dex-Starr, the feline Red Lantern for readers who are cat people.

The stories in this collection vary from the light and humorous to the more serious action-packed superhero stories, though the balance seems a bit weighted to the former.

Of the humorous stories, the funniest is the Batcow story “Panic at the Midnight Rodeo!“, where the courageous bovine is pitted against Laffa, a Jokerized mad bull. The humour of the story is centred around human characters treating the completely insane action as if it was deadly serious. It also gives us terrifically over-the-top bits of dialogue like, “She’s not just the cow we deserve, but the cow we need.”

One of my favourite things about this one shot is that it contains so many of my favourite characters that are underused or haven’t been seen for a while. I was delighted to see a new Captain Carrot story, but even more delighted that he brought the Zoo Crew along. DC really needs to consider reviving their title. I also appreciated that Little Cheese’s death appears to have been retconned away as well as his replacement, the rather boring American Eagle.

And speaking of series that need to be revived, the Animal Man story is the perfect argument for Buddy Baker to get a new series by Phillip Kennedy Johnson and Christian Duce. Duce demonstrates in this story that he is perfectly suited to draw the continuing adventures of Animal Man. However, I would like to see Buddy return to wearing his classic orange costume under his leather jacket.

Beast Boy has always been a character that seems somewhat underrated. He is often used in the Teen Titans titles as comedy relief, but there are depths to his character that aren’t often explored. He clowns around, but he does so to cover the fact that he is carrying around a lot of emotional pain. This story just touches on that a bit, even though it is mostly a lighter, fun story.

The Krypto/Superman story explores the bond between Superman and his pet in a way that we don’t often get to see. Mostly Krypto kept to the background of Superman’s adventures except when he is needed to fulfill a specific story-related task. However, we see here how deep their connection is, with neither one willing to sacrifice the other to save himself.

I also quite enjoyed the art for this story. It seems to me that Cully Hamner was taking inspiration from Gil Kane’s classic style, which is fitting for a story featuring Superman. Kyle Hotz seems to similarly taking a bit of inspiration from Kelly Jones in the Killer Croc story.

Ferdinand is a character who I am not terribly familiar with. He is a minotaur who first appeared in Wonder Woman, but now serves as chef in the Hall of Justice. The story is mostly a light-hearted story, but does touch on an interesting ethical issue. Ferdinand feels uneasy about cooking meat for the Justice League, but doesn’t want to compromise his duty to provide the best culinary experience for them.

This has been touched upon with Animal Man and Beast Boy. Both are uncomfortable with eating meat due to their connection with the Animal kingdom and opted to become vegetarian. But Ferdinand’s dilemma is even stronger. He actually is half-bull and his chosen profession requires him to cook up and serve that very species of animal. Unfortunately, he doesn’t find a solution here, but his situation does provide food for thought.

While I was happy to see Captain Carrot looking more like his Classic self than he has in years, his characterization doesn’t square too well with the original Captain Carrot and His Amazing Zoo Crew series. I could see him getting emotional about his Earth being in danger, I can’t really see him crying like a baby over it. While he is a “funny animal” character, Roger Rabbit seems to be acting more like his zanier namesake than his somewhat more serious-minded self.

Whether you’re an animal lover or not, this is an entertaining collection of stories that promises readers a fun time. There’s no way I could resist any collection that contains Animal Man, Captain Carrot, and Dex-Starr stories.