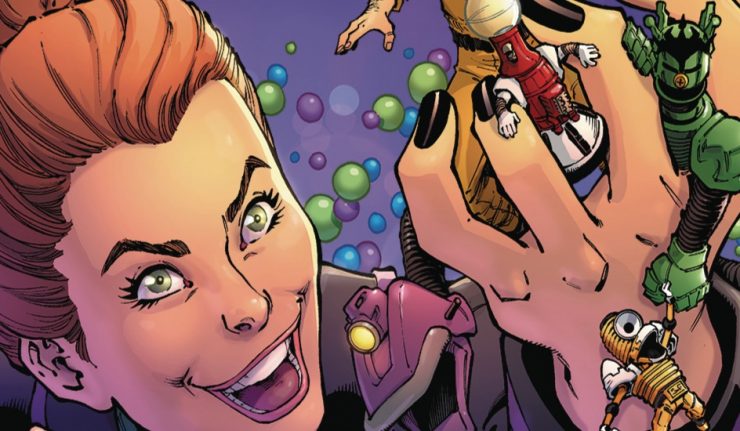 Mad scientist Kinga Forrester, determined to become the Queen of All Media, nearly has the world of comics in her grasp. But she has not reckoned with the nihilistic power of the Crow Keeper! Joel Hodgson and the MST crew do for comic books what they’ve done for movies, and the results are laugh-out-loud funny!

Todd Nauck and Wes Dzioba’s cover is cool. It, as well as the art in the host segments, captures the colorful charm of the show. It’s fun to see this world in comic form.

The rest of the interior art is a wonderful recreation of golden age comics. And it looks perfect; the artists showcase that era very well.

The concept of this book is great. I felt skeptical of  a Mystery Science Theater 3000 comic. I wasn’t sure what it would be or how that show’s format would translate into a completely different medium. It’s cool that the Satellite of Love crew is put into the comics themselves and actually get to take part in the story and interact with the characters within. It’s a fun evolution of the show’s concept.

And the accuracy of the era helps a lot. I love that it’s an anthology with three very different kind of stories. There’s a superhero, a romantic drama and a horror story. Beyond representing the different genres that were popular, these genres are also regularly featured on the show especially cheap horror movies with mad scientists.

One weird element is that every character in the book is riffing not just Jonah and the bots. It feels awkward to me. I think the book would be funnier if all of those characters were played straight and not as self aware parodies. Especially because they sometimes get better jokes than the Mystery Science cast.

I really liked this issue. It captures the tone and style of the show well. But it also has fun and knows how to adapt the show in a way that makes it the most effective for comics. I loved the homages to golden age books. It’s a very funny book that fans of the show will like a lot.