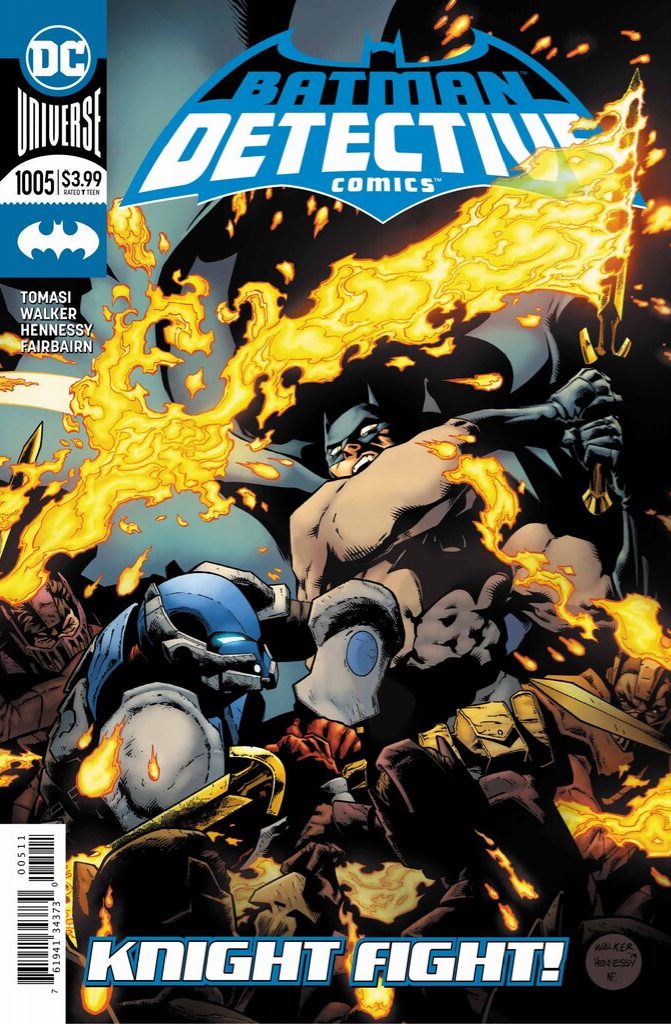 Batman and Robin swoop down on the Gotham Observatory where the Arkham Knight is preparing to execute the final part of her plan.  In order to try and stop the Caped Crusaders, Astrid deploys Dr. Phoshporus and Anton Arcane to stop them.  Phosphorus takes on the Bat directly, while Arcane uses his Un-Men to grow series of barriers around the Observatory.  They are successful enough to slow down the Dynamic Duo and Atrid is able to pull the switch creating an even brighter light even than the Day Bomb from Detective Comics #1001.

Batman then has to go one on one with Astrid in order to stop her and get the light turned off.  Alfred has let Batman know that the light is blinding everyone in Gotham.  The misguided Astrid doesn’t seem to care what she’s done, nor does she believe that Batman’s telling the truth when he attempts to set the record straight on his culpability in her mother’s death.

After finally subduing her she gets sent to Blackgate Penitentiary, but she doesn’t quite make it…, for better or worse, we haven’t seen the last of the Arkham Knight! 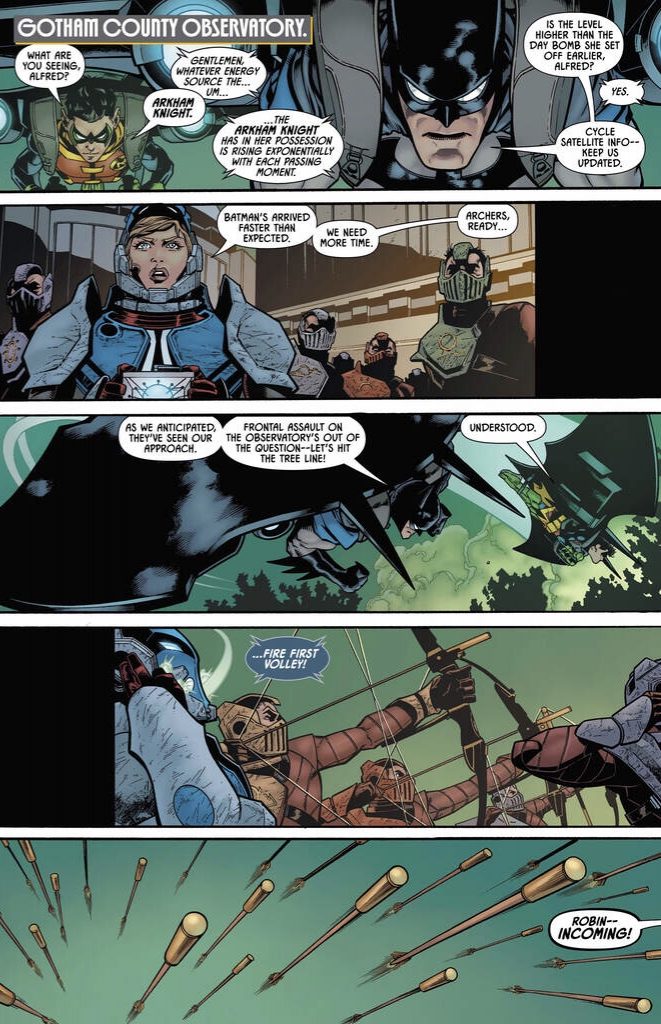 The best parts of Detective Comics #1005 are the little character bits between Batman and Damian.  Tomasi imbues their relationship with a realism that is familiar.  Despite the gravitas their world-saving adventures, Damian always has time to mess with Batman.  It’s thoroughly enjoyable in this issue as Batman, who’s been temporarily blinded by Astrid’s newest Day Bomb, tells Damian, “You do realize that I fan feel you waving your hand in front of my face every so often, right?”  This demonstrates the type of relationship between the father and son, but it also paints Damian as mischievous and perhaps not quite as serious as his father.  It’s nice that Batman has the restraint to take it all in stride and not overreact.

There’s a moment when Batman and Robin are moving in on Astrid, that the whole plot starts to feel camp.  It doesn’t last long, but it’s a moment of unbridled excess and fun.  It’s reminiscent of Batman stories from the ’50s and ’60s and the Adam West T.V. series.  It’s reflected again when Robin is jealous of one of the gagets in Batman’s utility belt that he doesn’t also have. 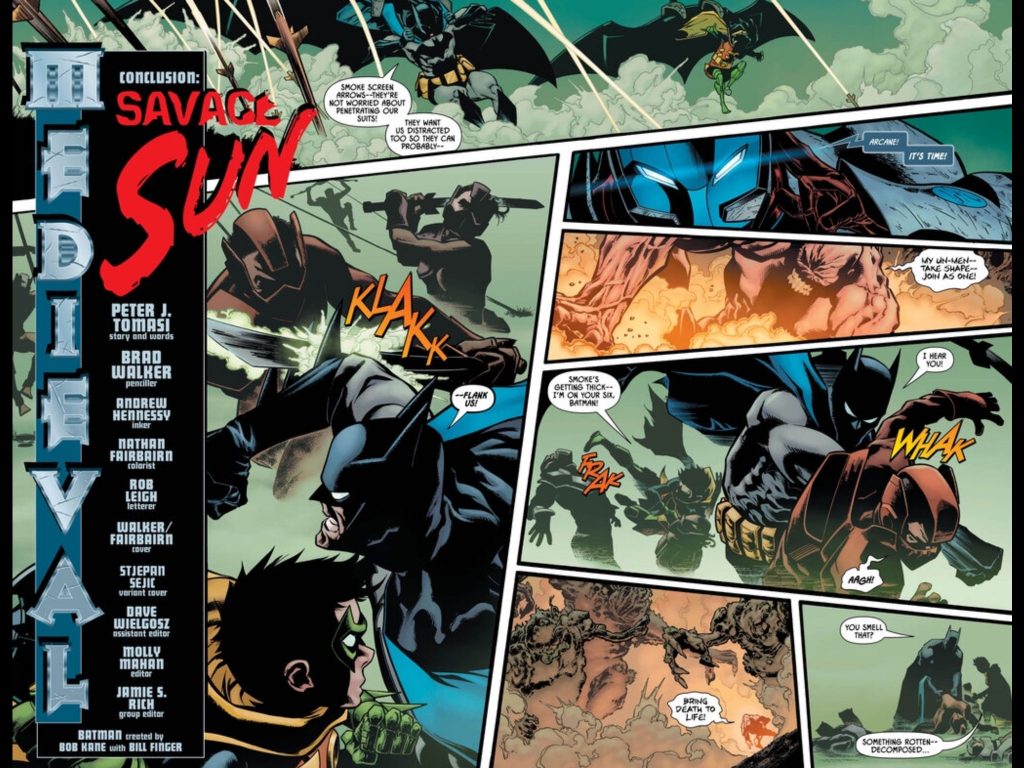 Unfortunately, the biggest negative in Detective Comics #1005 is Astrid herself.  While this issue doesn’t retread her origin, said origin is the basis for her motivation.  The surprise reveal that the Arkham Knight was a woman was a nice twist.  Sadly, nothing else about her character is intriguing or believable.  Since this is what’s driving her actions, she is essentially another in a long line of insane Bat-Villains that are more worthy of pity than ire.  She becomes a cliche instead of a character.

This is seen most clearly as Batman attempts to explain what really happened to her mother on the night her mother died.  Astrid doesn’t believe Batman, and nothing he says will change that.  She’s a young woman lost in a fantasy about Knights and chivalry that is punctuated by the Joker’s outlook on the world.  Remember, the Clown Prince of Crime was instrumental in her childhood development at the asylum.  She’s just as out of touch with reality as the Joker is, but she can’t be the living embodiment of insanity that the Joker is.  The Joker works so well because he is nameless and essentially faceless.  Once you put a name on that type of sociopath, the character loses his/her power.  The Joker should never have a definitive identity.

Additionally, Astrid has a bit of Azrael in her as well.  Azrael has the sword and armor shtick, and for a long time was under control of the misguided Order of St. Dumas.  The most unique aspect of Astrid’s character is her bizarre upbringing in Arkham Asylum by her father, Jeremiah Arkham.  But, this aspect is so odd that it comes across as unbelievable and forces the reader to find something else, thus her similarity to Azrael becomes apparent.  While her appearance and identity may be promising, the character herself seems best left forgotten. 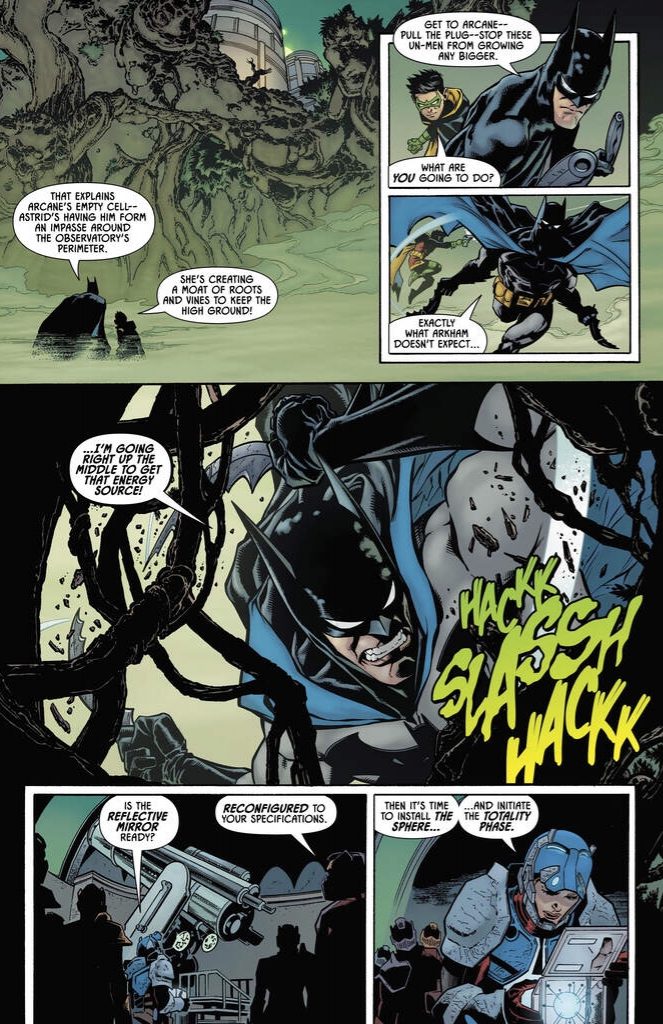 While the mechanics of this story are solid, Astird’s motivation and background make her a forgettable character.  Batman and Robin shine, though as Tomasi continues to have fun with this one-of-a-kind father and son duo.  Don’t be surprised to find a smile on your face as a little bit of camp goes a long way.  Though Astrid escapes interment at Blackgate, let’s hope she just keeps out of trouble and Detective Comics finds some better Bat-villains.