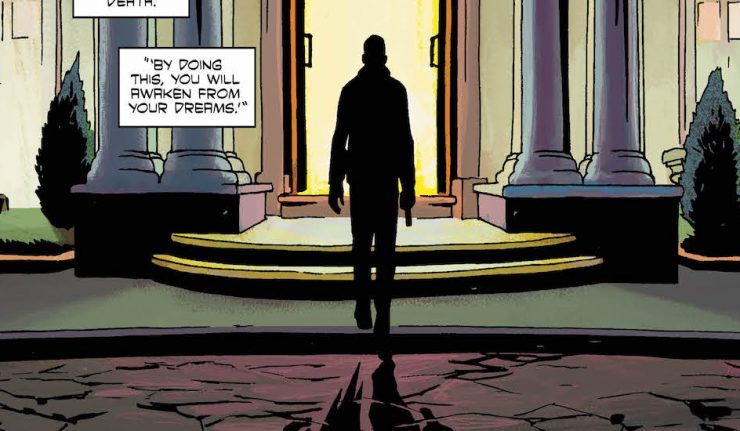 Identity, law, and purpose collide as Richard Wright is forced to choose what he’s really willing to risk to stop Wynn and Jennifer Morgan; and whose life he’s willing to sacrifice in the process.

Ben Oliver’s cover is great. I especially like the purple color scheme; that adds a neat dynamic to the image.

I don’t like the interior art. Some of the shadows and inks are interesting. But I find the style of the book unappealing. There’s not enough detail and the characters look strange.

I don’t know if this is a satisfying end to the story. The book wants to end on a note that is morally grey and grim. As Sheila puts is, they won and they lost. I understand that impulse but I don’t think this was the best way to do it. For one, I don’t follow Richard’s plan. Obviously Jennifer’s death would force Wynn to drop out of the race. But that’s all that really happens; he lost his daughter so that’s a personal blow. But the plan was to prove he murdered that cop. He’s still walking free for that crime and will probably run for office in the near future. This is a set back more than a victory. And Richard dooms Jennifer’s daughter to a fate in which she’ll become Jennifer. I am curious if Bryan Hill had more issues planned because this feels rushed.

In addition to the overall ending feeling abrupt, the conclusion to the assassin in the Obama mask felt odd too. He misses Sheila despite being fairly competent from what we’ve seen and Sheila is able to take him out fairly easily. This dude was one of the cooler elements of the book so it was strange to see him put down so quickly.

I really didn’t like this issue. It’s a somewhat fitting end to this disappointing series. There are a lot of great ideas here. I was interested in some of the characters dynamics and relationships. But not enough was done with any of it. This conclusion feels rushed and abrupt. It’s not satisfying in any way. It’s not a happy ending but it doesn’t have the punch of a tragic or even bitter sweet ending. It just ends without making any kind of real impact.