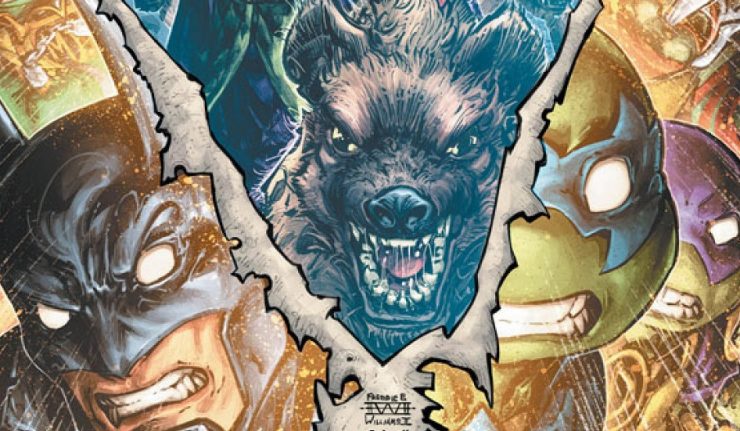 Batman, the Turtles, and the revived Shredder dismantle The Laughing Man’s hold over The Foot Clan. Shredder warns them their alliance is brief. Bruce Wayne, although 80% returned, still cannot remember he has a son. Damian Wayne is just a vague impression he misinterprets to Splinter. April O’Neil, meanwhile, recruits Casey Jones from his delirium as a GCPD cop. The Dark Knight reveals himself to Jim to bring Gordon’s memories back to normal, for he’ll need his help in a very risky maneuver. Since the team knows the Smiling Man has become Krang’s pawn in his plan, he’s a potential liability. Batman is forced into a very difficult decision: He recreates the accident at Ace Chemicals to turn The Laughing Man back into The Joker. However, his plan backfires as Joker still sides with Krang and intends to bring down the multiverse just the same.

FINALLY! After three issues of head-scratching, things are finally coming together this week. Freddie does a great job in his design of the REAL Batman’s suit after that piecemeal uniform. His costume design takes influence from Jim Lee’s Detective Comics #1000 cover and it works beautifully. James makes the right decision keeping Bruce partially amnesiac about his being a father. It sets up a powerful emotional moment to come, probably in the final issue. Bruce’s interactions with Splinter are now on an equal level as opposed to student and teacher. But what works in their conversation is Splinter still trying to mentor Bruce on some level despite the broken illusion while Bruce is trying to focus on reality. The mutual respect both characters have works as well as it did in the first two volumes of this amazing crossover saga. The return of Batman at full form also brings the return of his hard choices. His arch-nemesis could easily be left in his delirium as a ninja master. After all the pain he has spread to both Batman and Gotham, he is the least deserving of a full restoration. The choice of wardrobe confirms this is the DC Rebirth Dark Knight.

Tynion’s handling of the other supporting characters’ “awakenings” has a rhythm of a lie being unravelled by the yard. From Shredder making his presence known to April returning Casey his gear, the most brainwashed are quick to recover from their delirium. Freddie masterfully gives each their moment through powerful imagery. He even combines Shredder’s double-page spread with an homage to the TMNT cover (plus Batman). Freddie’s designs of the characters hit all the right notes this issue with the return to familiar continuity.

Tynion’s fake memory story, at times, feels like Total Recall and DC’s 2005 MOTU opener. The rhythm occasionally felt too fast. Tynion takes on a kindergarten slide instead of a gradual slope. It would’ve been a better idea to stretch things out till issue five. The cliffhanger last issue should have had a few pages of exposition. While Freddie was dead-on-balls accurate with the tone, I think a collage of Joker’s memories would’ve perfectly bookmarked Bruce Wayne’s memories. There is also not one mention of Earth-Prime Raph, and that is a mistake all things considered. Also, there should’ve been at least one of the Turtles trying to connect with Bruce as a brother. He had great chemistry with the guys in the last series; having him regulate them to subordinates he barely talks to was ridiculous.

It’s the issue that faithful readers have been waiting for. The writing flows, the colored inkwashes of Freddie Williams II catch the viewer’s eye, and all character get their spotlight. “Crisis in a Half-Shell” began very confusing but still engaging. It’s now becoming a clear plot that I can’t wait to see through to the end. See you guys next month! Booyakashaa!!!