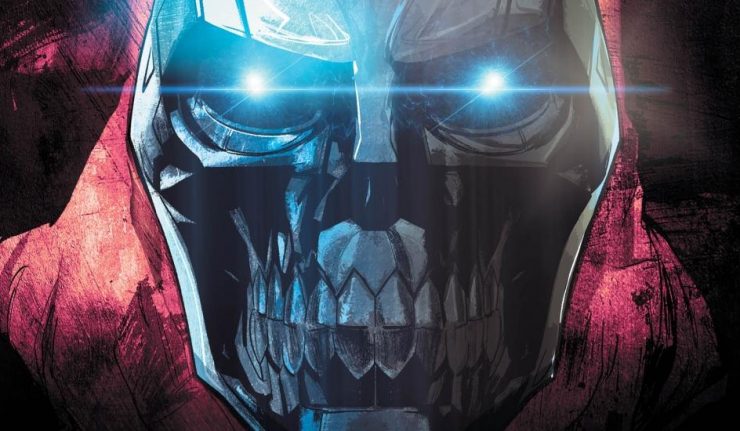 Black Mask: Year of the Villian #1: Black Mask was one of Gotham City’s most ruthless crime lords. He had money, power and respect. But after months in the Teen Titans’ secret prison, Roman Sionis is finally free. Given a new purpose and new abilities thanks to Lex Luthor’s offer, he’s found a new racket. Corporate crime not only pays better, but it’s far less dangerous. At least until Batwoman discovers what he’s up to and plans to put an end to Black Mask’s latest power grab. Is Black Mask the same crime boss he’s always been, or has time and a new approach made him something far more unstoppable than he’s ever been?

The underlying concept of the Year of the Villain tie-ins appears to be that Luthor is offering various DC villains upgrades to their abilities or equipment to make them more effective and dangerous threats, tipping the balance of the DCU away from Justice and towards Doom.

In this issue, we find that Luthor offers Black Mask a new ability based on his mask-themed modus operandi: the ability to mimic the appearance of any person he encounters. Essentially, he can wear anyone’s face as a mask.

What I like about this story is that this new ability is that Luthor identifies and corrects the true thing holding Black Mask back as a major villain: that his ambitions are too limited. Roman Sionis aims at taking over Gotham, but Luthor convinces him that with his new abilities, he could win himself an empire much bigger than a single city.

Black Mask is a member of the Batman’s rogues gallery, so you might think the Dark Knight would be the obvious choice to pit against him in this issue. I like that Tom Taylor went with a different choice instead, bringing in his cousin, Batwoman. If Black Mask is going to set his sights beyond Gotham, then he’s going to have to learn to deal with other crimefighters than Batman.

However, Batman does make an appearance as Bruce Wayne in a flashback to Roman’s childhood. His appearance doesn’t seem the least bit gratuitous since both Bruce and Roman were children wealthy Gotham families. It makes sense that they would have encountered each other in childhood.

I also liked seeing Renee Montoya again as well. This time we see her in her capacity as police detective rather than masked vigilante, but I wonder if she might end up facing Black Mask as the Question at some point. That would make for an interesting matchup. A villain who wears other people’s faces pitted against a hero with no face.

Black Mask’s new ability to mimic the faces of others seems to me to be a bit derivative of False Face, who is currently giving Terry McGinnis grief in Batman Beyond. However, since that comic is set in a future timeline, this doesn’t make the two characters are separated enough to not be overly redundant. However, I think the two titles might have been better served to not be featuring similar villains in the same month.

Similarly, I find the entire idea of Luthor offering to fulfill the desires of various villains (and a few heroes) to be somewhat derivative of the Underworld Unleashed event where the demon Neron did the exact same thing. However, I can accept this retread of an old concept as long as it keeps gives us some good stories like this one.

Although this event and special are a bit lacking in originality, they do give us an entertaining read. Also, it sets Black Mask up as a much more dangerous threat than before. I hope to see the new and improved Black Mask making more appearances, whether in the Batman family of titles or in the wider DC Universe.