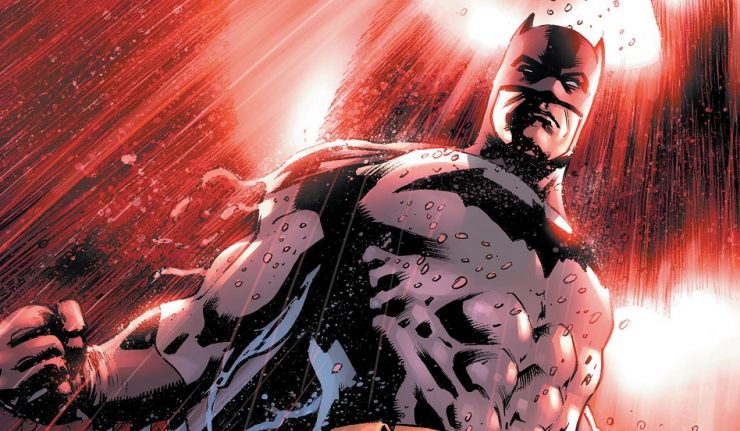 Rescued by two World War II soldiers lost to the outside world, Bruce Wayne not only comes to know them, but must find a way to prevent Deadshot from killing them and anyone else on the island on which his plane has crashed…it may not be easy….

If Detective Comics #1010 is about anything, it’s about character.  And, it’s not just Bruce Wayne or the Dark Knight Detective, the two lost souls on the island who’ve outlived World War II are just as expressive.  Tomasi uses these two old men to show the commonality in the human race.  At one point, bitter enemies, they come to terms with their situation and realize the sense in cooperation for their own survival.  It’s clear this mindset drives their assisting Bruce after the plane crash last issue in Detective Comics #1009.

The story the old men tell is moving.  It captures the emotions one would expect in such an event as well as demonstrating the best of human nature.  These two men could easily have continued to fight each other instead of pulling together in order to survive.  The American takes to calling Bruce Wayne, “Cary Grant,” a classic Hollywood actor when in his prime could’ve been a decent Bruce Wayne on film.  It provides a nice chuckle to lighten the seriousness of the situation.

While the plot moves along, the strongest part of this issue is the tale of the two old men on the island.  The whole bit is very reminiscent of a Spirit story by Will Eisner.  Eisner would often use the Spirit to tell a tale about human nature.  This is exactly what we have here.  Batman needs these two to survive, and it is the quality of their humanity that has allowed them to survive all these years which in turn is what directs them to help someone else in need.