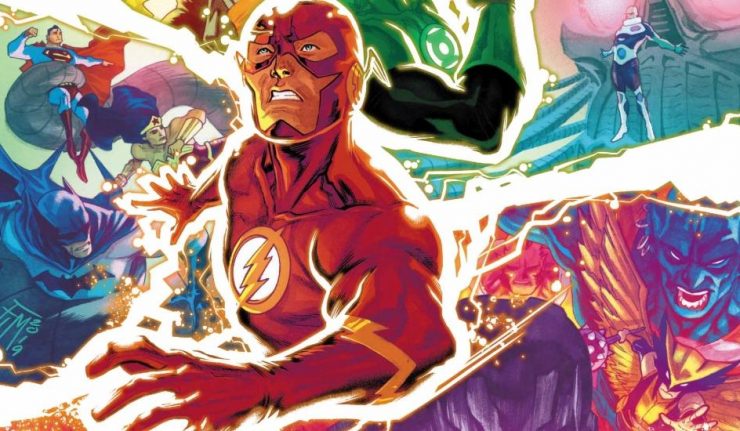 Justice League #31: “The Justice Doom War” part two! The culmination of Lex Luthor’s plan hinges on his beating the Justice League to the prize, ratcheting up the peril as the Year of the Villain continues! The Totality has shattered and its pieces have been tossed across space and time. Thus, the Justice League must also split apart, forming three search teams to comb the past, present, and future to re-combine the Totality before the Legion of Doom can get its villainous hands on the cosmic weapon. What allies will our heroes find in these other timelines? In the future, it’s the Last Boy on Earth, Kamandi! But in the past, there are the familiar faces of the Justice Society of America!

As we saw, the Justice League sent two teams through Hypertime, Green Lantern and the Flash into the past, and Superman, Batman, and Wonder Woman into the future. This allows for the inclusion of big name guest stars.

This is especially true for the past era, which shows Barry and John meet the Justice Society. I especially like their introductory conversation, in which they ponder why the Leaguers have never heard of the JSA.

I particularly like that this clarifies what the League currently does know about the JSA. Mainly that they know Doctor Fate and Hawkman, but the others seems unknown, despite many having the same name as heroes from their own era.

Also, I like that Barry senses a vague connection to Jay. Clearly Barry has forgotten their brief meeting during “The Button” storyline. And it makes sense that Jay does not share this vague recollection, as his friendship with Barry is still in his future.

The heroes quickly come to the correct conclusion that no one remembers the JSA because someone  has been messing with the timeline, tying neatly into Doomsday Clock. The JSA here appears to be the pre-Flashpoint JSA in their WWII heyday, with their costumes completely accurate to the time.

Meanwhile, the future team not only meets Kamandi, but the League’s counterpart team from the 853rd Century, Justice Legion A, from the DC One Million event. It makes sense to include a team representing Justice from the future to reflect the Justice Society in the past, and the Justice League in the present. Plus, it’s nice to see these underused characters make a return.

Also, it may be coincidence, but it seems strange that the name “Justice Legion” seems to be an amalgam of “Justice League” and “Legion of Doom.”

And finally, we get to see another important character return. When we finally get a glimpse of what the Anti-Monitor is up to, we find that he has enlisted a member of the League: Aquaman. This raises a number of pressing questions. The Anti-Monitor clearly has his own agenda apart from either the League or the Legion of Doom. But is he on the side of Justice or Doom? … Or neither? And is Aquaman serving him willingly or under duress?

One problem with an epic like this, is that there are multiple things going on that could be major events by themselves. This helps to establish the Justice/Doom War as an epic saga, but there is a downside. Unfortunately, these occurrences are given way less focus than they really deserve.

For example, while I love that Barry makes reference to this being “the first Justice League/Justice Society team-up”, I really wish we could have gotten a full team-up with both core teams interacting in a full story on its own.

Also, while I’m happy to see the unaltered pre-Flashpoint JSA back, I am bit anxious whether this is a sign that this is exactly how they are going to be re-integrated into DCU continuity post-Doomsday Clock or whether this is one last look at the original before they get rebooted. But that’s Geoff Johns’ story to tell in Doomsday Clock, so we will have to wait and see what happens there.

Snyder and Tynion have raised the stakes of the Justice/Doom War to the highest possible level, which is an extremely risky move. This storyline will either be a huge success or fall completely flat. Now that we’re getting into the thick of the conflict, it seems as if their gamble is paying off.