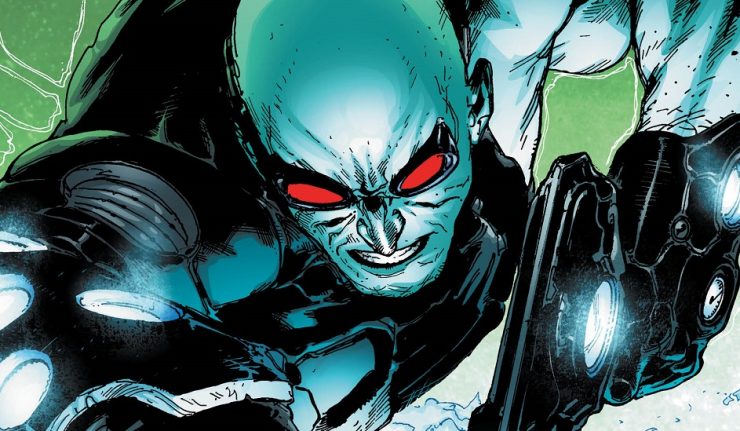 “Year of the Villain” finally comes to fruition in Detective Comics #1012, and it is well worth the wait!  Mr. Freeze’s plan is finally revealed in full.  Batman hears a 911 call that he finds significant and it leads him to a botched kidnapping by Freeze’s henchmen.  Just what is he doing with all those women…?

Don’t ever think there’s just one Batman.  Over the years, Batman has been portrayed in various ways: dark avenger of the night, campy sci-fi adventurer, super-hero family man, borderline sociopath and the even tempered, well adjusted crime fighter.  These portrayals tend to run in cycles and come eventually come back around.  Peter J. Tomasi’s run on the Dark Knight has only gotten better as only gotten better as he’s gotten further in.  Detective Comics #1012 gives us that well-adjusted crime fighter, and for this reviewer, this is the best interpretation of the character.  He’s not soft on criminals, but his humanity is at the forefront.  Additionally, he’s not clouded by any psychological demons.  And, Tomasi presents him perfectly.

For many years, Mr. Freeze was just a gangster with a cold schtick.  Until the Emmy Winning, “Heart of Ice” from Batman: The Animated Series aired September 7, 1992, that is.  The comics wisely adopted the changes to the character and ever since, Mr. Freeze is a villain with a sympathetic twist, eternally trying to restore his beloved wife, Nora to life.  She’s been trapped in a cryogenic state and in Detective Comics #1012, Freeze has a new approach to reviving her.  Despite the atrocious crimes he is committing, you can’t help feel for the guy.  Tomasi’s use of this aspect of Freeze’s character brings real emotion into the comic.  The opening sequence even suggests that Batman will probably even feel for Freeze as he laments losing Selina (Catwoman) so recently.  It’s not clear if this storyline will utilize Freeze’s most recent comic appearances in Batman #51-53, the “Cold Days” arc which immediately followed the non-wedding of Batman and Catwoman.  Referencing it could provide an even deeper look into Batman’s character.

There are some fun references a long the way that will put a smile on long-time readers faces: Breyfogle Street and Officer Conway.  The Batman even finds himself on “The Dolphin,” the yacht from Batman #1 (1940) where he first encountered Catwoman.  These all show how much Tomasi seems to love the medium and the history of the characters and creators.  “The Dolphin” also ties directly into what Tom King is currently doing over in Batman.

The final sequence in the issue is one of those sequences that one should see coming, but it’s done well enough that when it’s apparent what’s about to happen it’s time to turn the page….  And, it’s a really enjoyable moment.

Mahnke and Menodoza are spot on with their rendering.  There’s not a page that doesn’t feel just right.

It’s hard to say any comic is perfect.  Everyone has a different opinion.  However, Detective Comics #1012 comes pretty darn close.  I can’t find anything on the negative side.  There’s probably positives I’ve missed mentioning….

If you were waiting for “Year of the Villain” to become interesting…wait no longer! Detective Comics #1012 puts good use to Luthor’s gift to Mr. Freeze, but what Freeze plans to do with it is far more significant than the gift itself.  Batman and Freeze’s characters drive the plot.  The strong characterization of both go a long way in making this an enjoyable issue.  The sympathetic aspect of Freeze’s dilemma makes for a serious challenge for Batman as this arc continues, but how will it affect the Dark Knight as he reflects on his own emotional loss in the process…?