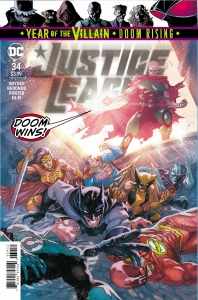 Justice League #34: “The Justice Doom War” part five! All Hypertime is breaking! If it blows, all of reality will follow after—which would be just fine for Lex Luthor, who is ready to prove to the evil goddess Perpetua that he’s the bad man for her. The Justice League is attempting to do what they can, chasing the Legion of Doom across the time-sphere. If the Totality is put back together, the whole Multiverse will tip toward Doom…and have consequences that reverberate throughout the DC Universe—assuming it’s not destroyed in the process.

The Justice League had one a single desperate chance to save the Multiverse from Perpetua. It relied on several different parties performing their part of the plan with precise timing, despite the interference of the Legion of Doom. But, as Justice League #34 continues, they actually are pulling it off and…

Goddamn it, Hawkgirl! What have you done?!

In her eagerness to get revenge on Lex Luthor for the fate of Martian Manhunter, Kendra delays her part in the plan. This allows Luthor to prevent her from adding the Nth Metal energy of her wings to the mix.

Therefore, the Ultra-Monitor fails to stop the rise of Perpetua. And thus, the Multiverse tips irrevocably away from Justice and towards Doom. And Perpetua sets out to reshape the Multiverse in her image.

This is quite the twist in the story. Snyder and Tynion could have easily just had the League’s plan barely succeed and called it a day. The League already faced the impossibly bleak prospect of a war they were certain to lose. But now they’ve actually lost it. Snyder and Tynion have demonstrated an uncanny ability to always find some way to make a seemingly impossible situation even worse for the League. 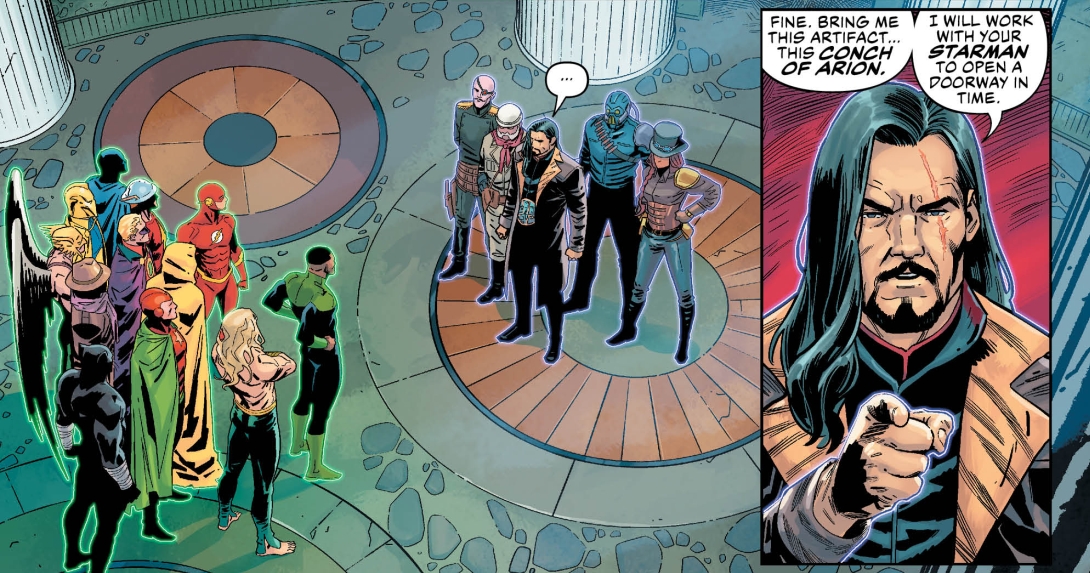 So, from here we get to see if they can be equally as brilliant at getting the League back out. It certainly looks like they’ve written themselves into a corner, but I fully expect them to find an ingenious way for the League to bounce back from this ultimate loss.

And if the situation were not bad enough, Perpetua appears to have restored the Anti-Monitor to his old evil self. Remember that he is a mass-murderer on a scale that makes Thanos look like an amateur. He destroyed entire realities, whittling an infinite number of universes down to five.

Luthor also tells us that the seventh cosmic energy has been unlocked. That makes me wonder what that energy is. Perhaps the Forever Force that was recently revealed in The Flash?

Kamandi has proved even more clever and industrious than last issue’s ending implied. He hasn’t only enlisted the Justice Legion A to join the future Leaguers against Brainiac, but has amassed an army of characters from various DC future timelines and alternate realities. Among others, I spotted the Red Son Superman, Watchmen‘s original Nite-Owl, Batman #666’s future Damian Wayne Batman, and even a few Kingdom Come characters.

And who is that character dressed in a variation of Catwoman’s Silver Age costume? Is it actually Selina? But isn’t Selina currently on the side of Justice, helping fight against Bane? And wearing a different costume in Batman and in her own title? Or is she a double-agent, infiltrating the Luthor’s Legion of Doom?

There’s not much to detract from the story, other than the fact that there are too many characters for any particular character or group to get enough focus. I hope we get to see future stories with these characters either in this title, or elsewhere in the DCU. 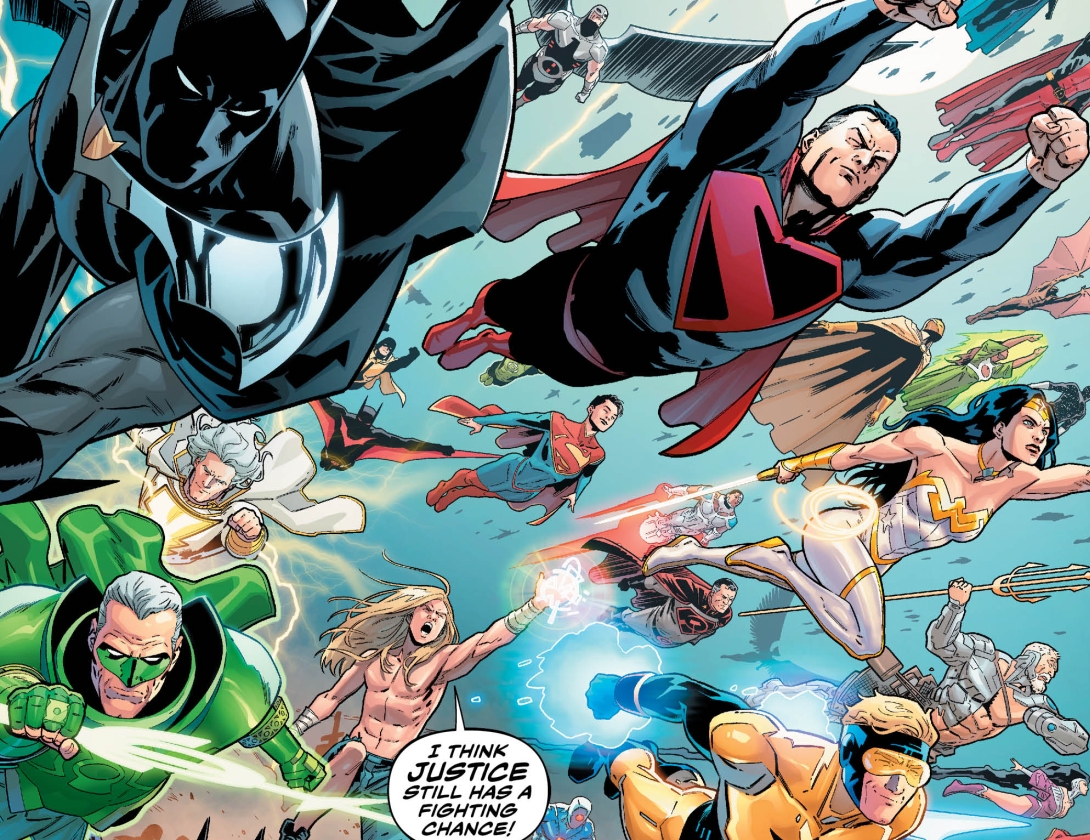 I have no clue as to how Snyder and Tynion could get the League out of the situation this issue leaves them in, which makes me that much more eager to see how they will accomplish this. So, far the Justice/Doom War has lived up to its hype as the ultimate battle in the League’s history. So, how can they recover from losing it?