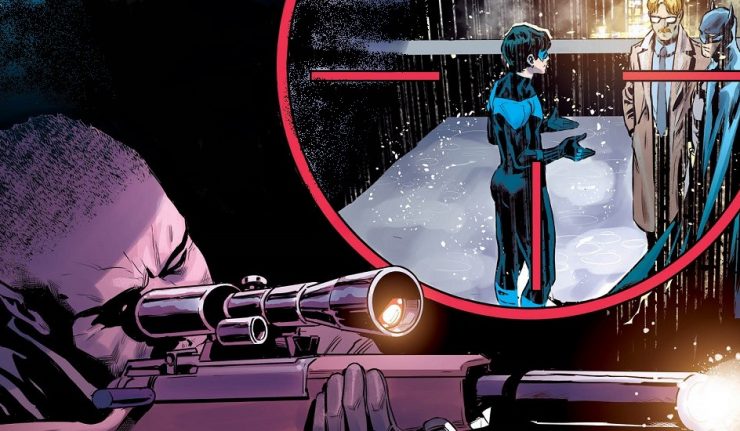 The Court of Owls have had their talons in Richard Grayson for a very, very long time. Nightwing Annual #2 finally brings into continuity what happened after Nightwing was shot.

In this week’s Nightwing comic, we get an extended issue that covers Dick losing his memories and the rippling effect.

We get to see Bruce’s reaction, which isn’t very healthy. For him or the newly appointed Richard. As well as the rest of the immediate Bat Family’s reactions.

There’s also some very tasty villainy at work here too. Showcasing just how far The Court of Owls will go.

I am so glad we finally got this!

A well written account of Richard’s first few moments after coming to has been sorely missing. Jurgens really pulls it out the bag this issue.

The tempo is incredible and doesn’t miss a beat at all. The “retelling” of Richard’s memories while he’s in a therapy session is genius. I loved the switch between the now, the past and the even further past.

I also happen to be a massive fan of when a detailed plan is lain out in front of me and I can see all the connecting dots. Jurgens pulls that off in this issue too. Tying together the last few issues with a nice little bow on it for the next few to unwrap.

While I completely understand the outbursts, and forceful way that Bruce tried to get Richard to remember; I can’t help but feel some of it was out of character. But then, I suppose that’s what happens when the last “son” you lose then comes back and tries to blow up your city.

Once again, Bruce had the chance to be a kind, nurturing father figure and failed. Something I always felt he was towards Dick. While he was more ruthless as Batman to Dick’s Robin, as Bruce; he was kind and gentle.

Other than that, not a bad thing to say about this issue!

I’d absolutely LOVE a mini-series about the reaction of the Bat Family as they try to go about their lives without Dick Grayson. How they each found out about him being shot, and even some of the hospital visits. There’s so many juicy character pieces and possibilities with that.

Gorgeous artwork that really helped to tell a very entertaining story. Dan Jurgens has done absolute wonders with basically a new character since jumping on board. Every issue is a must pick up and never put down again!