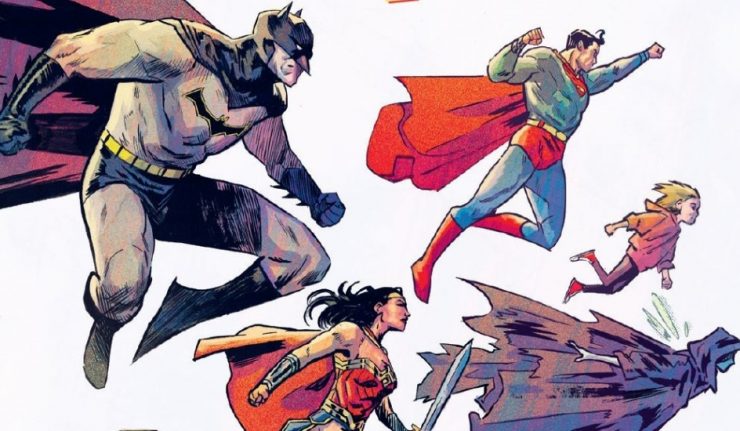 Black Hammer/Justice League: Hammer of Justice #5: Colonel Weird and the Green Lantern must convince the Black Hammer crew to go back to their own dimension to save the multiverse–which means giving up more than some may be willing to give.

I have been very much enjoying Jeff Lemire’s Black Hammer titles, which contain a number of characters that are pastiches or homages to various classic comics characters. So it is a special treat to see Lemire’s characters appear in the DCU.

Superman, Batman, Wonder Woman, and Cyborg are storming Madame Dragonfly’s Cabin of Horrors in an attempt to return to the DCU. Unfortunately, they have to fight through legions of supernatural monsters.

Meanwhile, Black Hammer heroes and the rest of the League are confronted with Mxyzptlk, who refuses to return everyone to their proper world unless they all are willing to go. But Gail has realized her deepest wish in the DCU: living in her true adult form instead of an eternal 9-year-old.

So, the fate of the two teams, as well as the existence of the DCU itself depends on getting the bratty young/old heroine to sacrifice her happiness for the common good. This is as Mxyzptlk intended and seems to make him a bit more villainous. He’s still a prankster, but with a nastier edge to his mischief. I think this characterization suits the character, making him less the comic-relief annoyance and shows him for the world-shaking threat that he truly is.

But, we do see that Gail has not entirely lost touch with her heroic side. She realizes what harm she is risking, and what she must do. She declares, “We’re still heroes. And heroes always do the right thing. So, ultimately she does what is right, even if she insists to Mxyzptlk, “… I’m mostly doing it to stick it to you, elf!”

I also quite liked that before departing the world of the Black Hammer heroes, the League stays long enough to have a celebratory dinner with them. It puts me in mind of how the Justice League and Justice Society teams would have social get togethers.

I also liked Madame Dragonfly’s insistence that the everyone will soon have forgotten this adventure had even taken place. “It will all just be an imaginary story,” she tells them, in a neat nod to the classic Silver Age explanation for non-canon stories.

The issue ends with Mxyzptlk revealing to Colonel Weird that his real motivation was to distract the heroes while he figured out how to unlock the secrets of the Para-zone. This gives Mxyzptlk access to “All space. All time. All worlds.” I believe this portends future crossovers between the Black Hammer and DC worlds – at least I hope that’s what it means.

I don’t have a negative thing to say about this mini-series. I just wish it wasn’t over so quickly. But the ending didn’t feel rushed, and the possibility of a future installment is left open, so I can’t complain too much.

I’ve usually enjoyed any of Jeff Lemire’s work, but Black Hammer has made him one of my all-time favourite writers. So, a story bringing together his creations with the foremost team of the DC Universe makes for an absolute classic. Kudos to Mr. Lemire for this story and to Mr. Walsh for his fine artwork!