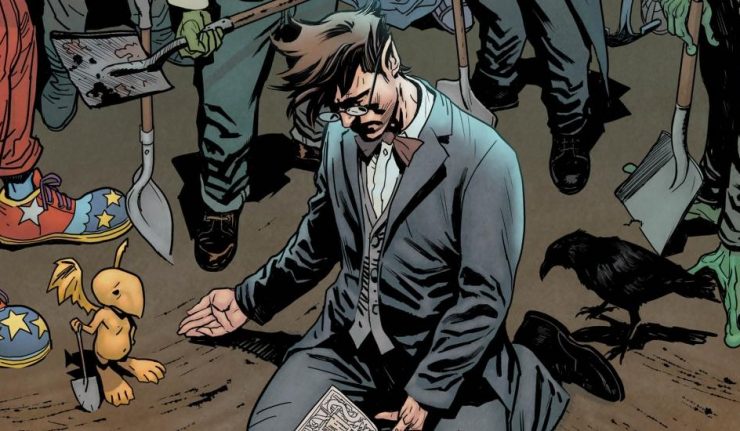 The Dreaming #17: Wan’s takeover of Dream’s realm is nearly complete. As his identity slips away, Abel only has one secret left in his pocket. And poor, tortured Lucien, lost and without purpose, longs for nothing but release, and to return to the foundations of the Dreaming. So why can’t he go? Does he have a purpose yet to serve? If he wants to die…why must he continue to pay the high cost of living?

The Dreaming #17 is Simon Spurrier’s penultimate issue, so matters are coming to a head. Wan, the artificial intelligence that has replaced Dream, is rewriting reality to eliminate imagination in favour of pure rationality and Abel is the only one who can do anything about it. But what can Abel do, when Wan himself is unaware of what he’s doing.

It’s interesting that instead of Abel, it is Lucien that triggers the event that might be the Dreaming’s salvation. With the loss of his library, Lucien tires of existence and in seeking death, find her. The issue ends with Lucien encountering Dream’s older sister, Death of the Endless.

I am pleased to finally see Death making an appearance in this series. What better way to mark the end of an epic story than featuring the embodiment of finality herself. Any story featuring Gaiman’s version of Death tends to be a good one. Thus, I have high hopes that the conclusion of Spurrier’s storyline will be truly memorable.

It is interesting to see the character development that Abel has undergone in this story. Abel has become much more than the eternal victim. In the absence of his brother Cain, he has taken on much of his brother’s role as well, becoming killer as well as victim. It is this change that allows him to make an attempt at assassinating Wan, even if it was unsuccessful. It makes me wonder Abel will be permanently affected by this story, or if he will revert to his old self once Cain returns to the Dreaming.

Spurrier’s story has been masterfully constructed, and is likely to leave a lasting impact on the Dreaming and on the Sandman Universe in general. I am uneasy about this, but I will hold judgement until I see how the story resolves next issue.

Simon Spurrier’s run on The Dreaming has given us a story that lives up to Neil Gaiman’s original Sandman story. He has managed to give us a fun ride, now it just remains to be seen if he can bring it to a satisfying conclusion.