Reeves Makes it Official, Colin Farrell is the Penguin in The Batman

Matt Reeves took to Twitter today to confirm Colin Farrell as the Penguin in The Batman. As he’s done recently with other casting, Reeves Tweeted an image of the actor with a comment indicating Farrell is indeed Oswald Cobblebot.

Reeves Tweet is a GIF of Farrell shrugging his shoulders with the message “Wait- is that you, #Oz?” “Oz” is surely an abbreviation for Oswald. Reeves’ previous Tweets have included Jeffrey Wright, “Tweet! #Gordon;” Andy Serkis, “Here comes #Alfred;” and John Tuturro, “I said… #Carmine Falcone.”

In December, Danny DeVito gave his approval of Farrell’s potential casting in the role.  DeVito lauded his friend’s acting ability and is looking forward to seeing Farrell’s take on the character.  Farrell’s physical appearance as the Penguin remains a question.  It was not hard to imagine the short, round Danny DeVito filling out Cobblepot’s tuxedo for a very recognizable Penguin.  Farrell is not built like DeVito, and one has to wonder how this film will address this. 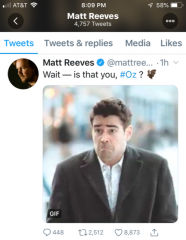 Should Reeves allow Farrell to maintain his figure for his role in The Batman, there is of course the obvious “fat suit and make-up” solution, or even some form of computer graphic “fat suit.”  The other option could be to allow Farrel to play a younger, not-yet-fat Penguin.  This was the approach taken in the recent Gotham television series.  Robin Lord Taylor’s final appearance in the ten year jump at the end of series finally showed him appearing as the Penguin from the comics.

An additional question concerns how the character will be portrayed.  In the comics, Cobblepot started out as a gimmick criminal who was never very threatening and mostly played for laughs.  It wasn’t until the ’90’s that the character got a little grimmer and violent.  Most significantly, Cobblepot began running a nightclub, “The Iceberg Lounge” as a front/laundering operation for his criminal activities.  One would imagine Farrell’s Penguin will have more in common with this version.

Birds Of Prey Will Probably Not Feature Jared Leto’s Joker