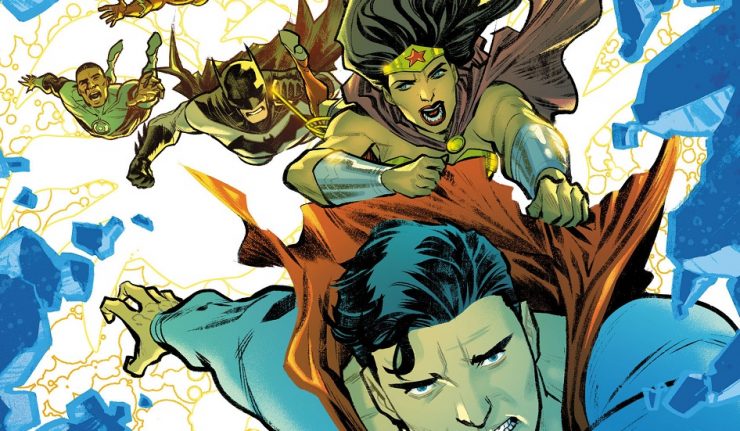 Taking the reins from outgoing Scott Snyder, Robert emphasizes “team” in his run on the twice-monthly Justice League. Further, in light of recent events, his inaugural five-part arc will focus its mechanism, starting with issue 40.

One example offered reflects on internal dynamics, from close friendships to intense rivalries. “What does one character feel about Superman having revealed his identity to the entire world without talking to that character first?” Recent scenes featuring the League and Superman post-reveal has shown Wonder Woman looking particularly sullen. Could she be that specific character given her close relationship with Clark? “Anybody who’s done anything from basketball [or] drama or anything where you have a bunch of different personalities working together, [there still] can be those disagreements among the group.”

The first arc, “Invasion of The Supermen,” will focus on Superman villain The Eradicator and the return of the Daxamites. Following that, he will bring in The Spectre, which will focus on Wonder Woman’s mythology and the threats it may present to the team. But, while he has demonstrated in Freedom Fighters his reverence on respective characters’ histories, Venditti ‘s story in Justice League will focus on the present as opposed to the past. “[If] you’ve been reading comics forever,” he explains, “you know who the Eradicator and the Daxamites are, but if you haven’t, you still know everything you need to know when you read these stories. And we’re taking those concepts forward into a sort of new direction.”

“Invasion of The Supermen” sees The Eradicator – Superman’s Kryptonian android nemesis obsessed with preserving Krypton’s legacy – genetically engineering the xenophobic Daxamites into beings that can thrive under a yellow sun and tolerate Earth’s atmosphere. With that plot Robert continues a story that he wrote during his run on Hal Jordan and The Green Lantern Corps. “[Daxamites are] very xenophobic. They don’t like to leave their planet. They don’t want anybody to come to their planet. And they’re very terrified of the outside universe. [With The Eradicator’s help, Daxamite culture] would actually be able to be the most powerful entities in the universe, and they wouldn’t have to be in fear ever again. [It’s] a story about xenophobia, but it also taps into the mythology of Superman and also the mythology of Green Lantern through the Daxamites. And it takes both [mythologies and] creates a scenario so big and so pressing that it requires the involvement of the entire Justice League to combat it.”

But why choose The Spectre as his next subject matter? Venditti admits the draw is the vast power set the embodiment of God’s Wrath possesses and the challenge of establishing mythological connections to Princess Diana’s world. “[I] really wanted to look at the Spectre and [his human host Jim] Corrigan as well, and what it would mean to be Corrigan and to carry the weight of The Spectre. And what would the world be like if The Spectre wasn’t around? What would the threat be posed there? And the way that it connects to Wonder Woman’s mythology through the pit of Tartarus and some of the Greek mythological monsters and Themyscira and things like that. Those are all things we’ll bring into the story, while at the same time [the team] will be forced to confront and make loud these rivalries and grievances they have between each other after having been a team for as long as they have, and coming from such different backgrounds. These things are brought to the surface.”

Given the book is published twice-monthly, that means a more hectic schedule. Venditti, however, maintains he is able to be an adequate juggler. “[It’s] a lot about being organized, and you have to be doing multiple stories at once. Right now, there are four different artists, I think, drawing four different scripts. [It’s] easier to think about one thing twice-a-month than to think about two different things once a month, you know? So I think it’s something I think I’m built for, in the way that I work, and also, I really like the idea of there always being new stories coming.”

One artist, in particular, has earned his praise. That man is Doug Mahnke of Green Lantern fame and current Batman artist. His art is behind “Invasion of The Supermen.” “[Doug] is beyond just being an amazing guy to work with. He’s such a great storyteller, and his rendering of these characters really communicates that power and that need that scale and that scope that you want from a series like Justice League.”

Justice League #40 by Robert Venditti and Doug Manke  will hit the stands February 5, 2020.