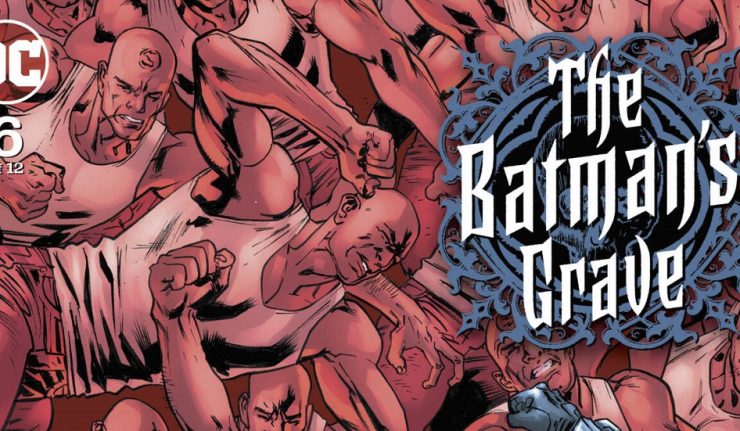 “…I could walk it (Arkham Asylum) with my eyes closed…” – Batman “In case there is a mass breakout?” – Jim Gordon “Or in case I’m ever locked in…” – Batman

The Batman is trapped in the most dangerous house in Gotham City, trying to protect Commissioner Gordon from a secret army out to kill anyone involved in the justice system. The war on the law has only just begun.

This is the sixth installment of The Batman’s Grave

Warren Ellis and Bryan Hitch have arguably provided a Batman story that is more akin to the Detective Comics of the 1980’s.  Ellis acknowledges the more vigilante role that Batman has outside of the law of Gotham and provides it in strong dialogue between Batman and Jim Gordon. I praise both artist and writer in that it takes a lot to tell the battle stories with no dialogue and Bryan Hitch does a great job with his pens in translating the story that Warren Ellis provides.

Batman notes that both a successor to Gordon or other political figures may not want/allow him to work in the ways that he does.  And Batman even admits that the head of Arkham wants him checked into the facility as well.   By Bryan Hitch drawing a younger red-headed Jim Gordon, you get the feel that this is a Detective Comics throwback story.

There was a frame in issue #5 where a patient in Arkham was literally naked and clinging to the wall in the hallways.  Given the climate of such a mental institution and the emphasis on mental health currently, Arkham is really nothing more than an “inmates running the asylum” place in Gotham.

Why are some patients secure and some are not?  Why are such villains housed there and true patients trying to heal allowed on the same floors?  And what is their weight room plan as every angry inmate is more than robust…it gives a bad name to physical fitness.

Knives, axes, swords…all of these seem to come with the rooms at Arkham so Heaven forbid that you get a room there and are under suicide watch.  While I list this under the “positives”, the story line depends on Batman and Gordon being immersed into such a toxic and unimaginable environment.

While Issue #5 crept up to the visit to Arkham by Batman and Gordon, Issue #6 is the adrenaline factor as danger is at every turn.  Once the fighting culiminates , you get some really clever dialogue written by Ellis.  “I am now in a mood!” Batman states.  Jim Gordon wondering how Batman has his cell phone number, but he doesn’t have his and must shine the Bat Signal in order to get his attention.

And Alfred….(whew, I am so glad he is alive in this story) providing a bit of history of his trials and tribulations that shed some light on how Bruce should work this angle of the case.

Another dead body and away we go again.  No spoilers here, but the more bodies that pile up, the closer we get to the case being solved.  This is the sixth installment of twelve so we have much more to peel back on this onion!

None here in that the art is solid, and the costume is very realistic for Batman.  And I appreciate a good detective story as we march towards a Robert Pattinson Batman in the cinema that is supposed to be dealing with the World’s Greatest Detective angle of the Batman persona.   Ellis provides us why Batman is always called in to solve crimes!

The more of these issues that mount up, the more I wish it was a trade paperback immediately.  But as a fan of the serial novel style, you can see why Ellis keeps cliff hanging the story!