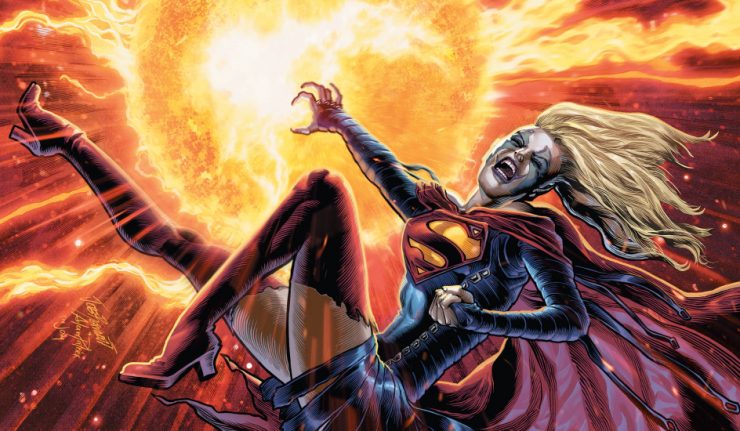 The epic clash between Supergirl and Wonder Woman comes to its dramatic conclusion. It’s equal parts battle of wits and battle of fists. Just as we think we’re getting through to her, Supergirl takes efforts to try and clean the influence of The Batman Who Laughs, with unexpected results. This leaves us to wonder what else could possibly happen…

The issue has kept up with the intense action the current arc has been made of, with DCs most powerful ladies in the fight of their lives. We also see the excellent motivation and psychological warfare on show here. The two’s motives are so clear, and slowly seeing one character’s frame change is satisfying and unexpected in a title known for its action.

I find it somewhat disruptive to the Supergirl title, that Wonder Woman is the more interesting character. I agree it’s nice to see this confrontation between these two characters, and it leads to great moments between both figures, but we root for Wonder Woman to get through to Kara rather than hope for Kara to find a way through her malaise. Reading along multiple issues of these characters tearing physical and emotional chunks out of each other, it’s all somewhat blurring together.
When the action is this good, however, keep it coming.

With Supergirl #40 ending in uncertain times, we’re left with much to speculate on what kept her under the influence of The Batman Who Laughs, despite her help and realisations. We can also worry about all the things that could happen next. How this title handles itself will be a big indicator for everything else in the wider DC Universe.