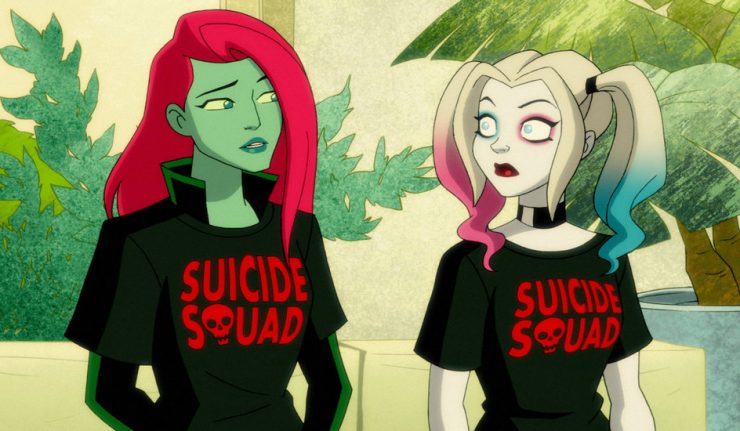 Every hero and villain have that defining moment that transcends them into their alter ego. For some it’s to help others and make the world a better place, or possibly for fame and fortune. For others, it’s to leave a long lasting legacy. We also can’t forget those that become who they are simply to cause chaos and suffering wherever they go. These “origin stories” are what make up fictional and non fictional characters alike, and make them relatable to readers and to audiences. This episode was all about Harleen Quinzel’s origin story.

While Harley is shopping around for a new lair, she suddenly discovers that she really doesn’t know herself, or even why she even embarked on a life of a crime. This triggers a mental breakdown of sorts, leaving her team to go into her mind to save her. If that wasn’t bad enough, Harley, while still in her mind, starts to question her whole origin story of how she became Harley Quinn. After finding her mental block, she decides to rewrite her origin story and comes out of her coma, just as Borgman is about to incinerate her and her whole team, thinking they were dead.

I have loved this series ever since the first episode. When episode five, “Being Harley Quinn”, tackled her origin story and gave us a glimpse into Harley’s mind (albeit terrifying and hilarious) I was completely on board. In the first few minutes in the episode we get a nod to the Suicide Squad and them sending swag to Harley’s team. Isn’t that how most black op teams made up of super villains operate and recruit new members?

Harley’s memories from her childhood really gave us an idea of how rough she had it growing up. From seeing her dad getting beaten up during a “business meeting”, to her truest love, eleven year old Frankie Muniz. Her background helps us to connect to her character in a way we hadn’t in previous episodes.

While traveling during her subconscious, we see that Harley may not be entirely over her ex. Now even though that may not be anything new or even surprising given her character, that does make her relatable, and even human.

Even through all the humor and jokes, Poison Ivy’s compassion and love for Harley is incredibly genuine. “Being Harley Quinn” was a good example of that. Not only did Ivy protect Harley from Dr. Psycho flying solo and mind probing her (watch the episode to get that joke), but she also convinced the team to help Harley go to the island of repressed memories.

Of course, the best part of “Being Harley Quinn” is when Harley realized that becoming Harley Quinn was always her choice, and not the Joker’s. Her origin started the day she left the Joker and went out on her own. This was such an important moment for her character, and gave us a much deeper appreciation and connection to her.

With all this talk about Harley’s origin, we can’t forget about Sy Borgman. Personally I’d love to know what happened in Peru, but we certainly learn a bit more about his past life in this episode. He later becomes the newest member of Harley’s team, mainly thanks to his connection to their new lair, an abandoned shopping mall.

No negatives to find in “Being Harley Quinn”.

“Being Harley Quinn” was an endearing and hilarious episode that not only shows how far Harley Quinn has come as a character in this series, but also brings together Dr. Psycho, Poison Ivy, King Shark and Clayface as a dysfunctional circle of friends. Once you’ve seen someone’s deepest repressed memories, what else would you call it? You will laugh, you will cry, and by the end, you will cheer. This is absolutely a must watch.