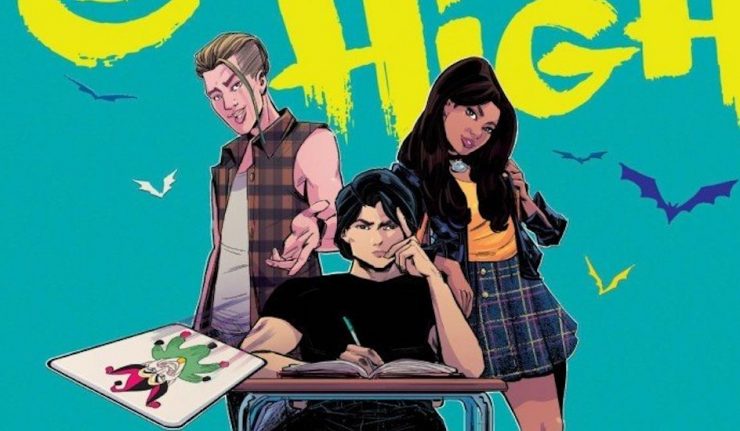 In Gotham High, 16-year-old Bruce Wayne returns to Gotham City after being kicked out of his boarding school, to find that nothing is as he left it. What once was his family home is now an empty husk, lonely but haunted by the memory of his parents’ murder. Selina Kyle, once the innocent girl next door, now rules over Gotham High School with a dangerous flair, aided by the class clown, Jack Napier.

Young adult fiction author Melissa De La Cruz (Blue Bloods, The Descendants) does a wonderful job of reimagining the legendary characters that have defined Batman’s mythos. First, there is Martha Wayne’s maiden name of Ma-Sha Dean. It’s her family roots, and money that connect Hong Kong to the Wayne. In this story, Martha Wayne was the source of the Wayne’s wealth.

When she and Thomas were killed in a horrible home invasion robbery, not Crime Alley, it is her brother Alfred Dean Pennyworth who becomes Bruce’s caretaker. Likewise, it is Alfred who sends Bruce to boarding school.

This Alfred lives in Hong Kong and is refined, cultured, and married. His husband John is equally debonair. I don’t think I could dress that cool if I paid someone.

Bruce is still Bruce. Always sticking up for the little guy. This time expelled for beating up the bullies of a young boy with glasses. A young lad named Richard Grayson.

Jack Napier is a hard luck kid with a great heart in spite of drunk and medicated parents. He wears cutoff shirts and a bowl haircut with panache. Selina was Bruce’s childhood friend. In his absence, Selina and Jack have bonded.

A great scene that documents this is when Jack finds a ten dollar bill while digging through the trash in an alley. Instead of buying drugs or food, he finds a used copy of “Zen and the Art of Motorcycle Maintenance” and leaves it on Selina’s windowsill. Yup, I was never that cool.

But Selina belongs to no one. Her independence is a choice and a necessity. Despite living in a beautiful home that neighbors elites like the Waynes, Selina is destitute. Her father lives  in a hospice bed while a disease slowly destroys his memories. A trust fund that could drastically change their lives is 5 years out of reach.

The final curse from a vengeful mother-in-law is the stipulation that only Selina can sell the house where they live. It’s an act of desperation from someone heartbroken at the loss of her daughter. And it motivates Selina’s desire to break free and chart her own course.

Layers of tension make this a juicy blend of conflicts to set the story. To begin with, someone is targeting Gotham High’s wealthy successors. Strike that. More than one person is going after high society’s scions.

Jack and this buddies The Pranksters have a weekly card game in the seediest bowels of Gotham’s notorious night-time districts. They lure in juicy marks like Bruce and fleece them until the game gets old and they find a new victim. But  young master Wayne is anything but helpless.

What makes things interesting is when young Harvey Dent is kidnapped from school moments after asking to try on Bruce’s leather trench coat. Harvey is later returned when the kidnappers realize he has no money. But a vicious knife scar across his left eye is a harsh reminder of the potential danger.

When Bruce begins to investigate, he finds a mystery that makes Jack seem like the easy suspect. But, a new twist raises the specter of another player in the game. Uncertainty leaves the young detective questioning who he can trust. Readers must decide for themselves.

Thomas Pitilli does a thing that sounds impossible. He makes Bruce, Selina, and Jack appear fresh and new. Bruce has a grim demeanor that isn’t etched into his brow or voice. Jack’s humor only holds shades of malice. Selina’s eyes and shifting shoulders bely her careless confidence in the midst of a con.

Pitilli also makes high school feel painfully honest. The pack mentalities are visible in the slouch and stumble of every person walking, running, or just leaning in the background. Even a moment when Bruce accepts a JUUL-like pen from Jack is layered with tensions. Meanwhile, the decision by Selina and Barbara Gordon to abstain and then walk away feels like a calculated judgement.

The tragedy of a story like this is the way it can leave readers wanting to read more. The brief hints of Ivy, Grayson, and Principal Gordon is tantalizing. Perhaps the creators can be convinced to do a second book.

I operate under a different set of criteria when reimagining a story or reviewing a reimagined story. I look for the value. It is much like reading an Elseworlds story. Holding on to the version of the story as you know it only holds you back from experiencing the wonder and invention that bring the new telling to life. Sure, you can do it.

You can also keep chocolate and peanut butter separate and never know the bliss of a perfect combination. The choice in the end is always up to you. The question is whether or not you want to miss out on a great treat just because it has new ingredients. So, what’s your answer?