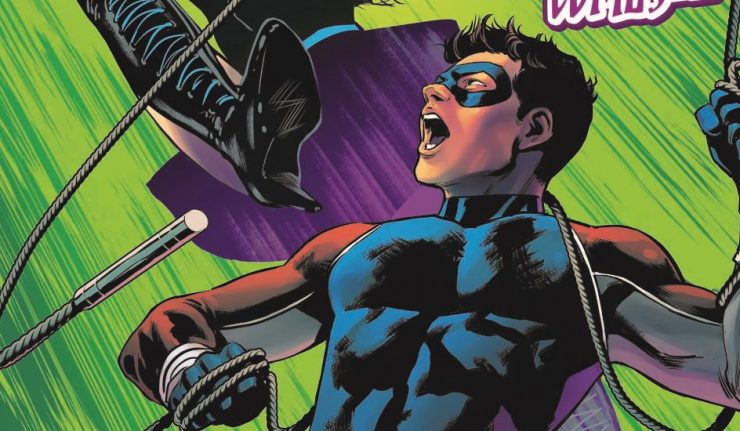 Dick Grayson has learned the truth: that “fixing” his identity lies with none other than Barbara Gordon. He must go to Gotham to find Batgirl-and runs into The Joker’s new henchperson, Punchline. Unlike Harley Quinn, Punchline’s deadpan black humor matches the deadly knives she uses on her victims…and for her next joke, Ric Grayson is the punchline.

BABS! There is no comic book where the appearance of Batgirl makes it worse. She always brings her A-game. She brings her brain. She brings her yellow boots. She is simply put, a welcome distraction in Nightwing #72.

I love the art here. Cliquet really understands how to draw an acrobat. Not everyone does. He captures Batgirl’s ballet chops as well. She is always poetry in motion. It is really great. The new baddie, Punchline, while pretty lame (see below), is characterized beautifully.

UGH. Ric, listen mate, it has been nice knowing you. You’ve brought in some lovely new friends. I like them, I really do,  but seriously, don’t let the door hit you where the good lord split you. This story line is exhausting.  I hate the Joker; I am not a Joker sycophant. He is evil and I hate seeing him. Don’t get me wrong, but the sooner we get the Joker War started, the sooner it is over and Dick will be back.

I am not a huge fan of Punchline. There is even a joke in here about her being a knock of Harley replacement. If the story is being that self-aware, then why must we deal with her. Again, this all comes down to the powers that be in the land of DC who have decreed we shall all see (OK that was the end of the rhymes) a giant crossover event once a year.  I just want to spend time in Bludhaven, with Dick Freaking Grayson and his quips and his joy and his genius.