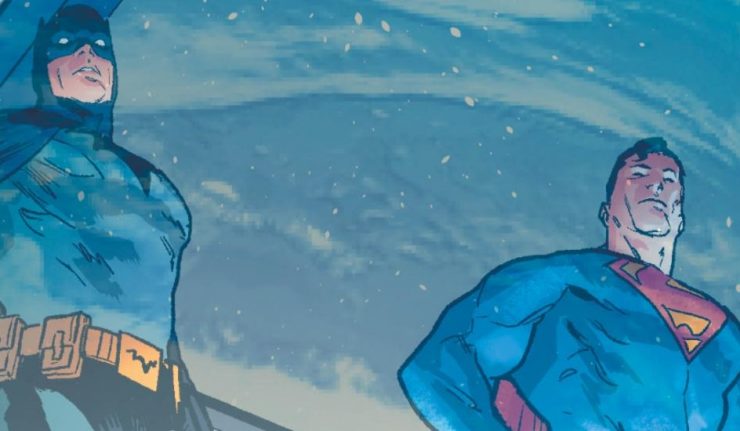 Injustice: Year Zero #1: The Justice League throw a celebration honoring the heroes who came before them—the JSA! Batman finds himself in an unexpected spar with Wild Cat for old time’s sake while Wonder Woman, Alan Scott and the Spectre contemplate their actions in WWII. Meanwhile, Joker finds exactly who he’s looking for that will come back to haunt the JSA.

Injustice: Year Zero #2: Both Justice League and JSA members discuss legacy as Batman and Superman talk about the possibility of Superman starting a family (and we all know what that led to in Injustice: Year One). Commissioner Jim Gordon reveals to Batman that Joker broke someone out of Blackgate Penitentiary while they were at Watchtower with JSA—who is Andre Chavard, and what does the Joker want him for?

Injustice: Year Zero #3: Flashback to the 1940s in Egypt with Hawkman and Hawkgirl on one of their archeology expeditions as they discover a mysterious amulet that possesses Shiera’s body…what will it take for Hawkman to save her? That is, if it’s not too late…

Almost out of nowhere, DC dropped three issues of a new Tom Taylor Injustice series. Last week, Taylor started dropping hints towards some new project, but not revealing exactly what it was until it released this week. No one was really expecting a new Injustice series, considering that Taylor has his hands full with multiple DCeased projects. Also, no new Injustice game has been announced.

But Injustice has grown to be more than a game tie-in comic, earning an audience that goes beyond the segment of comic readers who are also gamers. This is mainly due to Tom Taylors skillful world-building. He took the games plot and fleshed out the world and expanded the story around it.

Now Taylor is providing us a prequel, showing us this alternate DCU before Superman went down the dark path shown in the games and Taylor’s earlier series. This DCU is somewhat familiar and yet a bit different. It’s not exactly the New 52/Rebirth Earth or even the pre-Flashpoint Earth. In fact, it seems to me to be rather reminiscent of the 70s era DCU in some ways. Batman is somewhat less grim than he is portrayed nowadays. The Justice League and the Justice Society have regular meetings. And Superman and Batman have a strong and healthy friendship build on mutual respect and trust.

However, things are not completely rosy in this pre-Injustice world. The opening narration reads “If they were still here. To guide us. To inspire us”. over a picture of the Justice Society”. The sentiment is then reiterated over a picture of Alan Scott’s bloodied ring hand and Jay Garrick’s damaged helmet: “If they were still here. To be our heroes”.

The implication is clearly that something tragic happened to the Justice Society. This fits with what we know of this world’s future. The JSA didn’t appear in Taylor’s other series, and only appeared in the game as alternate versions of other characters. The narration also implies that if the Justice Society had still been present to act as an example, then perhaps this world would have taken a different path than shown in Injustice: Gods Among Us.

In these opening issues, an elderly prisoner named Andre Chavard arranges his escape from Blackgate prison by offering some secret knowledge that would grant the “power to control a god”. Chavard is a longtime DC character, a member of Joe Simon and Jack Kirby’s Boy Commandos. This importantly marks him as one of the few non-JSA characters old enough to have been in World War II who was young enough to still be alive in the present, and Chavard’s story starts in 1942.

Chavard relates this story to the Joker, telling him of Carter and Shiera Hall uncovering a mysterious Egyptian tomb, where Shiera dons a mysterious and finds herself possessed by an evil entity named Apophis. Given that Apophis is a god of Chaos, possesses the wearer of a helmet, and has an upside-down Ankh as his symbol, it seems likely that he is an evil opposite of Doctor Fate.

I am also somewhat intrigued by the lineup of the Justice Society shown in this story. Certain members are not surprising like Green Lantern Alan Scott and Jay Garrick Flash. But the Ted Knight Starman is present and in reasonably good health. As is the original Black Canary, Mister Terrific, Sandman, and Hourman, who had all died in the present in the pre-Flashpoint DCU. Also, Liberty Belle and Amazing Man, who weren’t actually Justice Society members at all. Interestingly, Wonder Woman belongs to both the JSA and the Justice League, like in the current regular continuity. I hope we get a good chance to see this lineup in action before they meet whatever grisly end Taylor has in store for them.

When a writer creates a story that is a classic, it’s like catching the proverbial lightning in a bottle. Attempts to come back and add more to the story later can often be disappointing if the writer cannot recapture the lightning. It’s still early into the series, but Taylor has given a promising start to this prequel. He might well deliver a story as classic as the original two series.

There is plenty in Injustice: Year Zero #1-3 to indicate that Taylor is going to provide us another top notch story from this darker DCU. And it’s always great to see a new Justice Society story. I look forward to seeing what Taylor has cooked up for the rest of this surprise series.