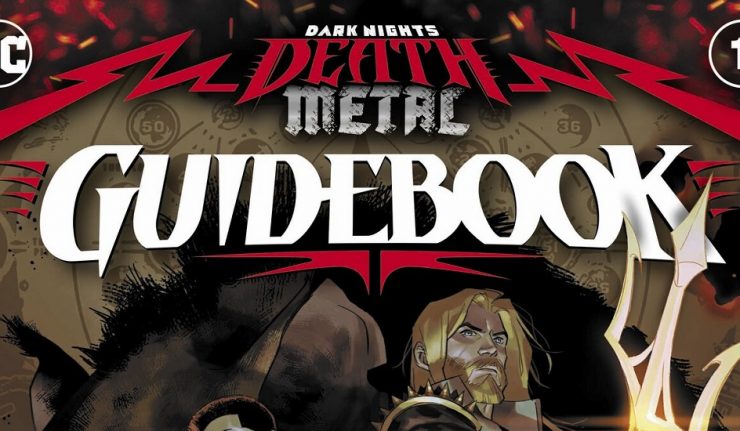 “It’s time for me to get back my Legion!” – Lex Luthor

Earth is turned upside down, shrouded in a realm of darkness after the Justice League’s defeat by the cosmic goddess Perpetua. Now the Batman Who Laughs and his army of Dark Knights rule the planet, wreaking havoc on humanity and raining destruction on the world. As Wonder Woman, Superman, Batman, and other heroes fight to survive in this strange new landscape, one cloaked figure has been observing from the sidelines, creating a guidebook to this new world and its evil leaders in the hope of forming a plan of justice… and penance. This issue showcases the new factions of Earth and explores the mystery of what happened to our heroes after their battle with Perpetua. How did Wonder Woman become the queen of Hell? How did Batman find the Black Lantern ring? And what happens when Harley Quinn takes charge of the Wasteland, and finds love in the process? All this and more in this jam-issue exploring the new world order.

Finally , its the Easter Egg or a clue that we needed.  There are five stories – four of which feature Harley Quinn, Wonder Woman, Aquaman and Batman.  The Fall of Earth is very much a retrospective piece for anyone that has not followed the entire Dark Metal series.

In fact, this guidebook is perfect for a “catch up” but only actually lends itself to one new direction as to where all of this is going.  Lex Luthor’s employment of the Main Man, Lobo, to obtain the remaining Dark Metal before The Batman Who Laughs can get it.

I get the feeling that Luthor is a bit disdained with his prior agreement with Perpetua going south when The Batman Who Laughs poked his nose into it.  And now we see where this is headed as Luthor wants to put his Legion of Doom back together.

Maybe it is still the Year of the Villain!

The stories are solid and they provide some insight on the battle that is raging over in this Dark Metal series.  Given the investment, it is about time for a wrap up.

One of the more classic tales is Batman and Jonah Hex.  Their exchanges are comic gold.  And that story alone is worth the price of this book!

Harley continues to be an enigma that has fought her way to being a main stay character in the DC Universe.

Wonder Woman…sigh…simply put, every artist associated with Dark Metal has drawn Diana beautifully.  If there ever was a glimmer of hope in this story line, it comes directly from Diana’s beauty and soul!

I’m all over the place with this series.  We know the story, we know the origin and the sand has filled around all the rocks!  Let’s get on with it as I am ready for Luthor and Wonder Woman to both execute their plans and see what ramifications this has for the DC Universe.

There is a lot jammed into this Death Metal Guidebook.  And you have to be a specific fan of Batman, Harley, Wonder Woman and Aquaman to appreciate this particular filler book.  I’ve given you the major Easter Egg in Luthor’s quest.  Perhaps there is more than met my eye in this issue, so invest in this Metal!