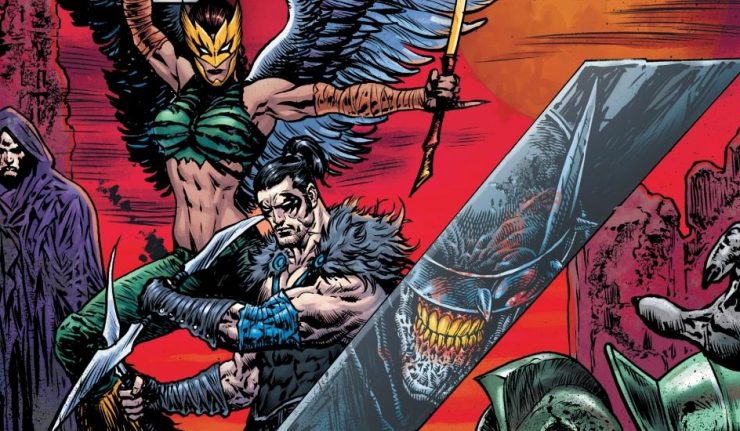 Justice League #53: “Doom Metal” part one of five-the Dark Nights: Death Metal tie-in that will directly impact the finale of that event! Nightwing’s on a mission to free the Legion of Doom from Perpetua’s clutches. But to do so, he’ll need the help of none other than…Lex Luthor?! The surprises are only just beginning, as Nightwing, Lex, and a new Justice League must fight their way through an Earth twisted by the Dark Multiverse. Titans will be tested, hearts will be broken, and blood will be spilled!

With Justice League #53, we see yet another creative team change on the title. Joshua Williamson and Xermanico bring us the first chapter of “Doom Metal”, a Dark Nights: Death Metal tie-in story.

This storyline eschews the usual lineup of the Justice League and centres on  a group put together by Nightwing. This group includes Hawkgirl, Detective Chimp, and going by the variant cover, will soon be adding Starfire and Cyborg. Perpetua has the Legion of Doom in captivity, draining their power. Nightwing’s team seeks to weaken Perpetua by freeing the villains from her grasp.

It’s interesting that the team needs to align themselves with Lex Luthor. Luthor tells them that since Perpetua rejected him in favour of the Batman Who Laughs, he has come to regret his actions. But is Lex being truthful, or is he plotting to somehow take Perpetua’s power for himself. The story Lex tells is quite believable, but Lex has acted contrite and remorseful to mask darker intentions before. Nightwing may be forced to accept Lex’s assistance, but he should remain wary of his true motives.

With a totally different lineup of heroes in this story, one might wonder what makes this a Justice League book. Dick himself even denies connection to the League: “I’m not Justice League”. But I don’t think he’s being quite honest here. Everyone on his team, including Lex Luthor, is or has been a member of some iteration of the Justice League. And the story opens with a telling flashback of Dick Grayson’s first encounter with the team during his early career as the first Robin. When faced with that iconic team, he tells himself that, “One day… I’d be in the Justice League”.

I also have to wonder at Cyborg’s absence from that early meeting of the Justice League. Could it be that DC is moving back towards a version of continuity where Cyborg started as member of the Teen Titans, rather than as a founding member of the League? I certainly hope so. Not that I don’t think that Cyborg is worthy of being in the Justice League, but he’s an indispensable part of Titans history.

I also like the references to DC history that are all around in the Metalverse. Nightwing’s team faces off against creatures based on the Creeper and Solomon Grundy while in Slaughter Swamp. And I love that the mechanical horse gifted to Dick by Wonder Woman is named Comet. This is in reference to Comet the Super-Horse, Supergirl’s pet horse in Silver Age comics.

I also quite enjoyed Xermanico’s artwork. He has done a fantastic job of depicting this weird post-apocalyptic DCU. And it was absolutely chilling, seeing his rendition of the destroyed Hall of Justice.

I have no criticisms of Justice League #53 itself, but there is a problem with the title itself that needs to be addressed. Once again we have seen a changeover of writers, with Joshua Williamson taking over for the duration of the “Doom Metal” storyline. Yet DC has already announced that this storyline will be immediately followed by an Endless Winter tie-in story by Andy Lanning and Ron Marz.

As DC’s premier team book, Justice League deserves to have a consistent creative direction. DC really needs to find someone to take on the job on an ongoing basis. DC has no shortage of talented writers and any of the title’s recent writers are fully qualified to do the job. But, my choice would to be to give the job to Williamson. Since he’s reaching the end of his stellar run on The Flash, he should have time in his schedule for the job. Also, that makes him already used to writing the Scarlet Speedster, as well as Batman and Superman, since he also writes their shared title (Batman/Superman). That’s half the team there. C’mon DC! Williamson would be a great fit for the job.

Justice League #53 is an intriguing opening to this Dark Nights: Death Metal tie-in. From what I have seen in this issue, I predict that Williamson and Xermanico have a fantastic story ahead for us.