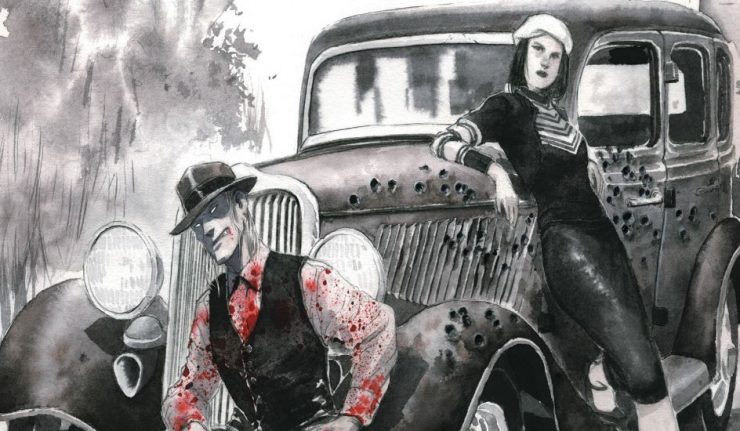 Skinner Sweet has exhausted all efforts to regain his lost immortality. With his powers and purpose gone, he is now determined to go out with a bang. At a seedy motorcycle rally in the desert where he’s closer than ever to his death wish, Pearl Jones and a shocking partner tracks him down for one last, desperate mission: The force known as the Gray Trader and its minions are tunneling through the bowels of the world to unleash hell on Earth—just in time for America’s bicentennial. With catastrophe looming, it’s up to Skinner and Pearl to reconcile and change the course of history—or die trying.

American Vampire 1976 #1 has a star. It is not Skinner (well, I mean it is). It is Rafael Albuquerque. There is not panel in this book that did not captivate me. The amount of detail he puts into each panel is special. Look below at the bottom three panels and tell me that you didn’t spend time transfixed on the visual storytelling. I defy you to just blow past them. Wow.

Snyder knows how to ratchet up tension. It helps that Albuquerque is on the job, but pretty much everything Scott does reads like a novel. There is no exception here. He asks a lot of questions and he does not give us all the answers we want. He knows when to let the words do the talking and when to get out of the way of the art team. Reading this issue is like taking a master class on how to write a book for adults.

American Vampire 1976 #1, for all of the good things, is not really the first book in a series. If you had little to know idea what was going on, you would feel lost. Snyder does a lot to alleviate that, but this has a bit of a coming into season 5 instead of starting at the jump kind of feeling. Readers might pick this up because they see the number 1 on the cover thinking it is something different than it is. Hopefully they will give it the chance it deserves.

American Vampire 1976 #1 goes big. It leans on the nostalgia of the 70s. Skinner’s motorcycle daredevil is perfect for the time period. Staring out a new series that also exists in the world of an existing series is a hard circle to square, but if anyone can do it, Scott Snyder can. This first issue pulls no punches. What a last panel.