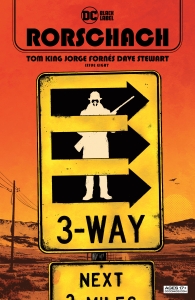 Rorschach #8: As the detective digs deeper into the mystery behind Rorschach and his sidekick, the story becomes about not what they wanted to do but why they started on their murderous path. As more witnesses emerge, the stranger Laura’s history is revealed to be. Tough times made her want to kill a presidential candidate, and she did a lot of damage herself when fighting back.

In Rorschach #8, Tom King’s nameless protagonist questions three men who were associated with Wil Myerson. Following last issue, Frank Miller (yes, that Frank Miller) was arrested and subsequently “gave the name of the three men to whom he sent money after being visited by Cummings”.

And we actually see Miller’s arrest in a flashback. I wonder how the real Frank Miller feels about this? I presume that DC wouldn’t have allowed this scene without his okaying it, so I doubt he’s offended. But it’s got to be a surreal feeling.

Also, I love how this scene mirrors the arrest of Rorschach in Watchmen #5. The same sequence of three panels is shown. The first shows multiple officers holding Rorschach down. The second shows his mask being peeled off. And the third is most similar. Millar makes the exact same enraged facial expression as Walter Kovacs and screams the exact same words: “No! My face! Give it back!”. Is Miller deliberately mimicking Kovacs’ behaviour and words, or is he actually channeling Kovacs? 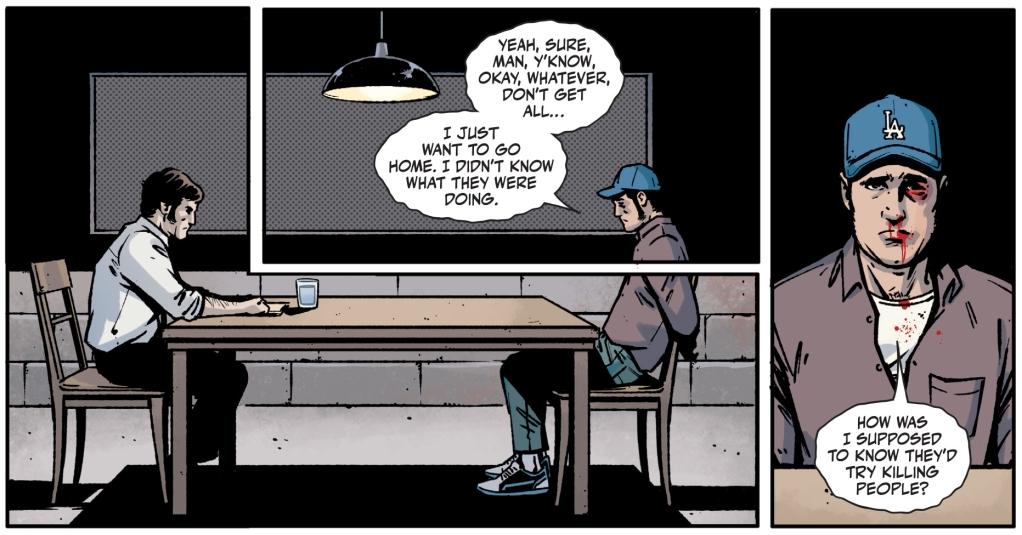 The story uses a very effective visual device. We see the interrogations in parallel, rather than in a liner fashion. Each page is divided in thirds, with each third showing each of the men in turn being questioned. The interrogations follow the same pattern. So reading through a piece of each in turn reads as a continuous narrative rather than seeming to jump around.

This structure is carried off beautifully due to King’s writing working hand-in-hand with Jorge Fornes’ skillful artwork. Colourist Dave Stewart’s colours also play a role, as each third of the page has a different thematic colour that links through that section on every page: red, green, and blue. Each man wears an item of clothing of one and the flashbacks are tinted these colours.

One notable scene has the detective get up and punch each of the men, despite the fact that they appear to be telling him everything they know. We don’t know much about this detective, but it appears that he’s not above using bit of brutality to punctuate his questioning. He’s apparently not a nice guy.

The thing that bothers the detective is that the stories match perfectly, as if their stories were practice and polished to reveal a specific narrative. It is when he expresses his skepticism that the men drop the pretence, each recognizing something in the detective. Together, they say “Oh. It is you. I’ve been waiting for you”. Then they reveal the message for him: “The squids are here”. 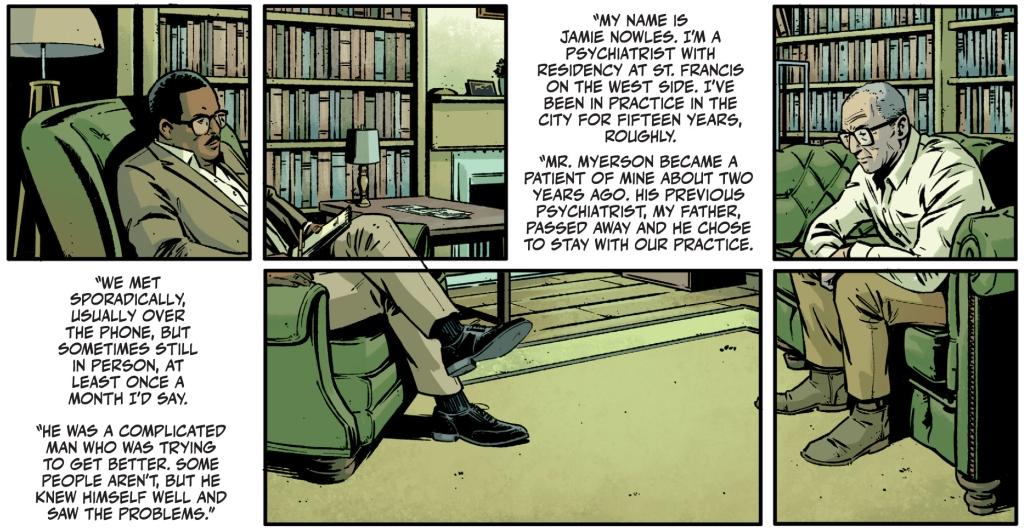 This seems to confirm my theory of where this series is headed. Myerson instructed these men to give their message to the person who asked the right question. And who would Myerson think would ask that question? And who would he want to give that message to? To the person who could pick up and carry on the mission if he failed: the next Rorschach. I don’t think he knows it yet, but I believe the detective will become the next Rorschach. That’s why King hasn’t told us who the detective really is. The only important answer to that question will be that he’s Rorschach.

And I suspect King will leave us wondering whether Rorschach’s soul is actually moving between bodies, or whether this is just a succession of men who fall for the same delusion. The readers will be left to answer that question for themselves.

I also caught an interesting mention. One of the men mentions that “there’s cops who wears masks in like middle America now”. This seems to be in reference to the Watchmen TV series. King had mentioned on Twitter that this series would be in the same universe as that series, so this would seem to be confirmation of that.

Tom King’s Rorschach is the kind of series that requires you to think. You need to focus your attention and work through what exactly is going on. For some, this is  drawback. I don’t believe it is, as a story that makes your exercise your mind is my favourite kind of story. But some prefer their comic books to be mindless entertainment. But that’s not really a drawback, as I doubt those readers kept reading past the first or second issue.

Rorschach #8 seems somewhat paradoxical, as although the detective is learning more details about the attempted assassination of Turley, the mystery somehow gets murkier instead of clearer. This title nothing like you would expect from a Watchmen sequel, but is absolutely brilliant anyways.