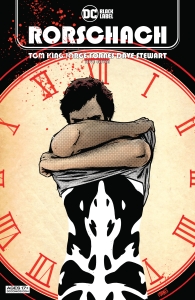 Rorschach #11: To solve the attempted murder, the detective on the scene must first solve an actual murder. Before Rorschach and Laura can carry out their ill-fated plan to kill a presidential candidate, they first have to find a way into his political rally. Once that detail is uncovered, the rest should snap into place- especially if it turns out that their inside man was part of the rival campaign. The only problem is that man is dead, potentially killed by the very people he was trying to help, and as everyone knows, dead men tell no tales. Thank goodness, then, that crime scenes do! There’s only one more issue to go after this. Don’t miss out on one of the most intriguing comics of the year!

In some of my reviews for earlier issues of Tom King’s Rorschach, I shared my theory that the nameless detective would don the Rorschach mask at the end of the series. Well, Rorschach #11 appears to confirm that. Well… he hasn’t physically donned the costume, but the issue makes it evident that the detective has become the latest avatar of the masked vigilante, if unwillingly.

The issue consists mainly of the detective arguing with the deceased Wil Myerson and Laura Cummings. It is unclear whether these are hallucinations or whether the detective is consciously imaging them to aid him in sorting out the case. The detective talks to them as if they are present, but the illustrations contradict that. They are shown in different locations, and at different ages. It’s more like a dream sequence than a ghostly visitation. And the fact that the detective never shares a panel with either of them also implies that they are not physically present.

But does their not being physically present make them not real? Maybe. Maybe not. The detective treats them as if they are, and King uses their conversation to unload a whole lot of exposition in an interesting and intriguing manner. So, perhaps it doesn’t matter.

During their conversation, they wrap up the mystery behind the assassination plot and uncover the true villain behind that plot. But the detective digs even further – into the deeper mystery below that. He suspects that the entire mystery was set up specifically to lead him to conclude he needs to take up the role of Rorschach and complete their mission. Laura tells him, “The point is, by figuring it out, all of it, you see the who picture. You understand us, you understand them. They you can judge each by each, and do what you have to do… At the end of the day, you pick up your gun and you figure out where to put it. You know what you have to do”. 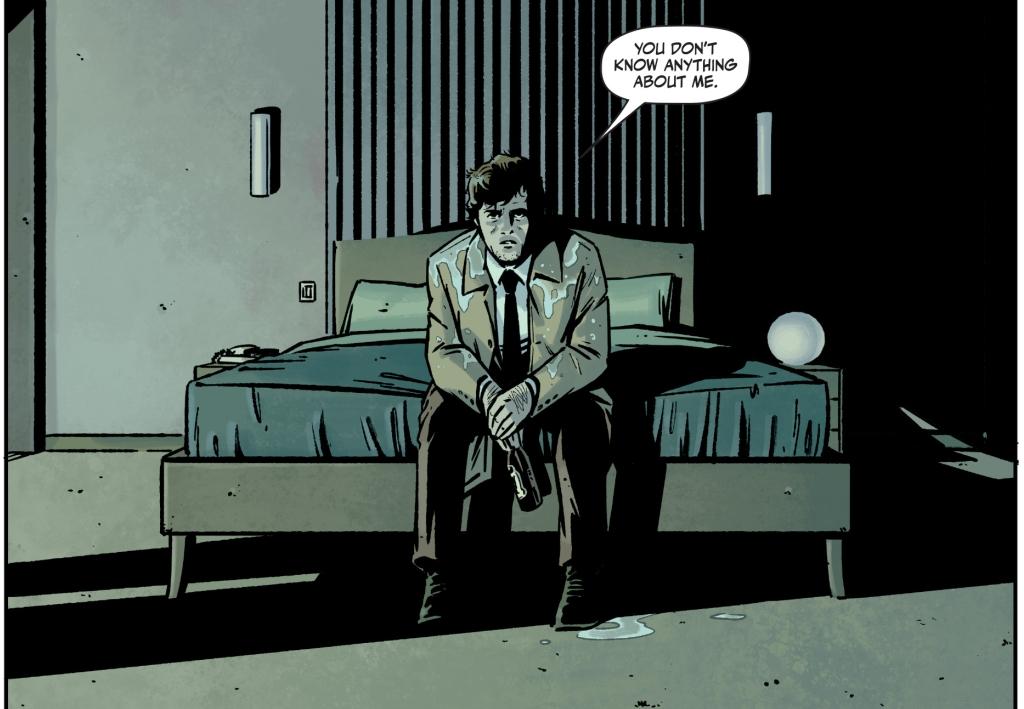 We realize that this is only a metaphorical death, as the detective awakes in the morning, alive and uninjured. But the symbolism is clear. The detective’s old self has died, and he has been reborn as Rorschach. He doesn’t don the costume, but his new identity seems to be confirmed when he encounters another customer of the hotel. After the man bends his ear for an entire page, he responds with a simple “Hurm”. Readers of the original Watchmen series will recognize this monosyllabic utterance as a trademark of the first Rorschach.

It seemed a bit odd that the detective has remained unnamed throughout the series. In retrospect, I believe that King did this, as this series has been leading the unnamed protagonist to finding his true name: Rorschach.

I also loved Laura’s discussion of the superheroes in the Watchmen universe. At the end of the classic series, the age of superheroes has essentially come to an end. Laura states that the disappearance of the world’s heroes can mean one of two possibilities: “One, they abandoned us. The bad of the world was just too mighty for the good they represented. They lost and they ran and they hid and they die and hope is nothing next to power”.  This is the ending that Alan Moore gave his series. Some, like Rorschach, died and others, like Nite-Owl, Silk Spectre ran and hid. Even Doctor Manhattan left Earth behind. 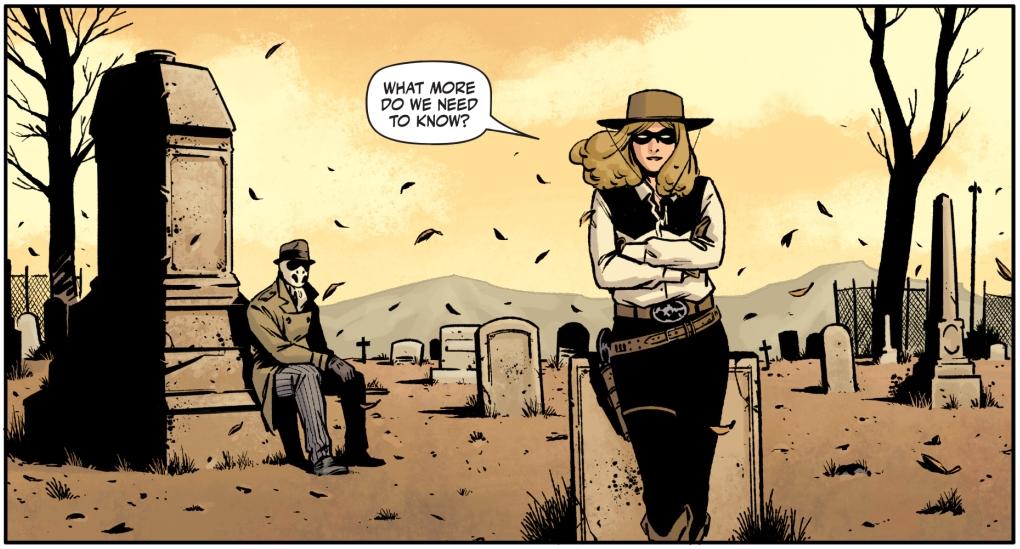 But she offers a more hopeful option, “Two, they planned. They passed on their legacy to us. We are the superheroes. There is a chance. A chance for the good to overcome. For the righteous to triumph. They didn’t retreat. They sacrificed to give us this chance. Personally, I prefer option two”. This flatly contradicts what the readers know about the original story. Is it actually better to believe this more optimistic view than Moore’s bleak reality or accept more optimistic fantasy that allows the characters to carry on?

I also have to remark on the stellar work of Jorge Fornes in this issue. Despite the presence of a fair bit of exposition, there is a metaphorical level that is mainly carried by the art. Fornes has done a fantastic job of conveying this from King’s mind to the readers’ eyes. Of this whole series,  believe that Rorschach #11 best exemplifies the amazing teamwork between the writer and artist.

No complaints at all. If this isn’t a perfect issue, it’s damn close.

King has brought all the threads together in Rorschach #11, and the detective has solved the mystery. But he has been fundamentally changed by that mystery. This series has been an amazing ride. Now it only remains for King to bring his series to a satisfying conclusion in the final issue.