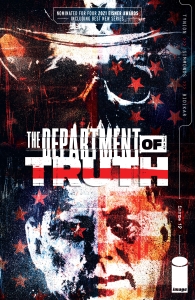 The Department of Truth #12: America was built on a lie that’s never quite come true. The cracks in that idealistic vision have inspired dangerous people to do horrible things in the name of an America that’s never really existed. Hawk Harrison knows the genuine story of this country, and he’s ready to give Cole Turner a history lesson.

The Department of Truth #12 story is titled “Revelations”, and it certain lives up to that title. The first revelation is that Cole has met Hawk Harrison before. We knew that Hawk had been assigned to manipulate young Cole’s allegations about Satan-worshipping daycare workers. But a flashback now shows Hawk discussing the matter with Cole’s mother, as young Cole watches TV in the next room.

Cole enters the room and tells Hawk, “You’re a liar”, and his response is to tell the youngster, “All grown-ups are liars.  But only some of them know that they’re liars. It’s better to be one of the ones who know rather than one of the ones who don’t”. When Cole asks “Why?”, Hawk responds with the common adult evasion, “I’ll tell you when you’re older”. This makes me wonder if Hawk was already planning to involve Cole in the Department’s plans later in life, or whether this is an accidental bit of irony.

It’s also interesting that Hawk is shown in this panel as a demonic figure, with horns and hooves. Is this literally what Cole was seeing? Is this filtered through his later memory? Or is this Martin Simmonds’ metaphorical representation of the event? The fact that Cole doesn’t seem to panic implies that it’s not literal, but it’s still not clear what it means. But it does foreshadow another revelation in this issue. 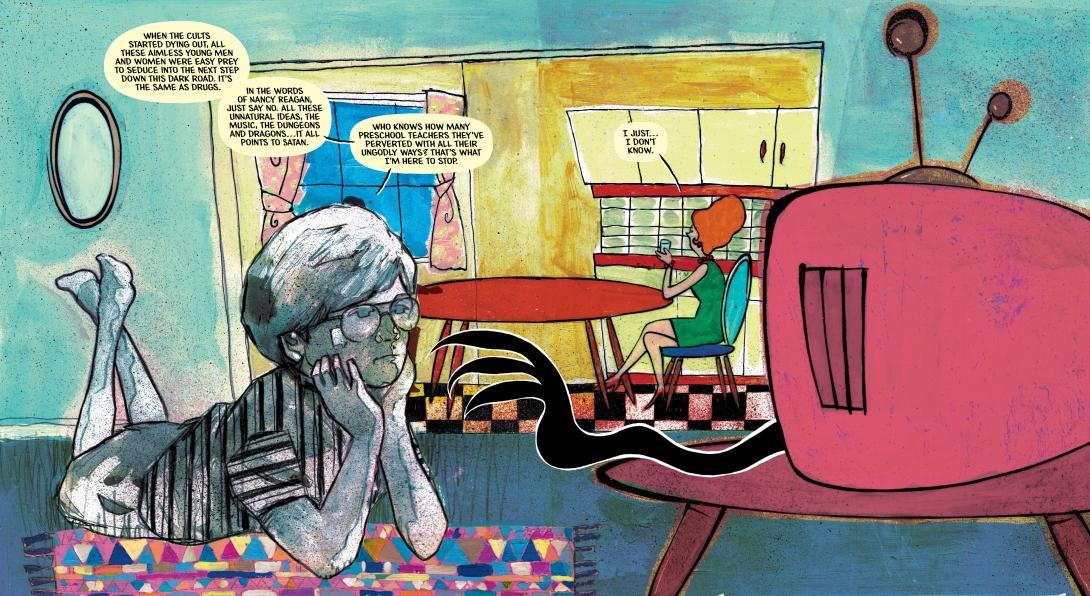 That other revelation is the big shocker, as Hawk reveals to Cole that he is actually a double agent for Black Hat. This even further muddies the question as to which group is on the side of right – if either of them are. Last issue, Hawk allowed a Sasquatch hunter to live in defiance of Department protocol. This action paints Hawk as somewhat morally superior to the Department of Truth. This would seem to imply that Black Hat might have the moral high ground. That is, if Hawk’s act of defiance wasn’t a show designed to win Cole’s sympathy.

We also see Ruby describing to the Director the method by which Black Hat manipulates social media to influence belief and reshape reality. She makes the shocking pronouncement that “Black Hat can do in a few days what we can do in a few months”. Clearly the Department is at a disadvantage, and time is not on their side.

There is also an interesting section involving black helicopters. When conspiracy theories about unmarked black helicopters carrying out secret government operations, Hawk realized the potential of playing into this. He convinced the Director to acquire some helicopters for the department. Thus, the belief in these helicopters gave them some of the benefits of Tulpas, allowing the Department to carry out their work with greater secrecy. 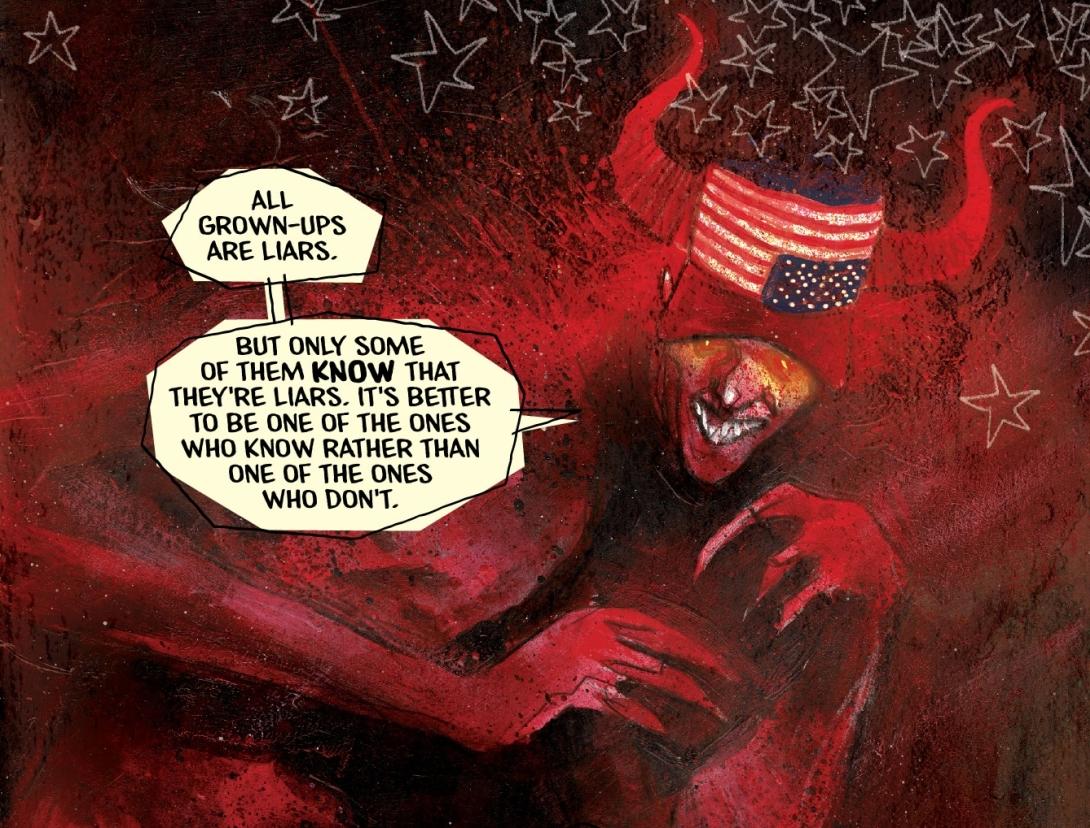 Martin Simmonds has produced some great work here. I like the almost cartoony feel of the flashback to Cole’s childhood. I suspect this is either filtered through Cole’s memories or how adult Cole is picturing the events as Hawk describes them. Despite the colourful, cartoony feel, Cole himself is drawn in a more realistic and monochrome manner. In fact, he looks as if his adult head has been superimposed on his child body.

Also, we can see the reflection of the Star-Faced Man in Cole’s glasses as well as a menacing hand reaching out of the TV towards him. This would seem to be in reference to Hawk’s manipulation of the cartoons Cole watches, which we learned about in an earlier issue. And then the style changes in the last panel that shows a demonic Hawk. This sequence is clearly more of a metaphorical than literal retelling of the event. But it is very unsettling.

James Tynion IV’s story appears to be getting quite convoluted. While this may be a drawback for most stories, it seems entirely appropriate for a story involving conspiracy theories and shifting realities. The characters live in a world where Occam’s Razor doesn’t apply.  As current events seem to bear out, a significant amount of people are quire willing to overlook the most logical explanation in favour of a more convoluted one.

The Department of Truth #12 is another great chapter of a series that is quite unlike anything else I’ve ever read. This is the kind of story that messes with your head, but in a way that leaves you eager for the next issue to do mess with your head even more.