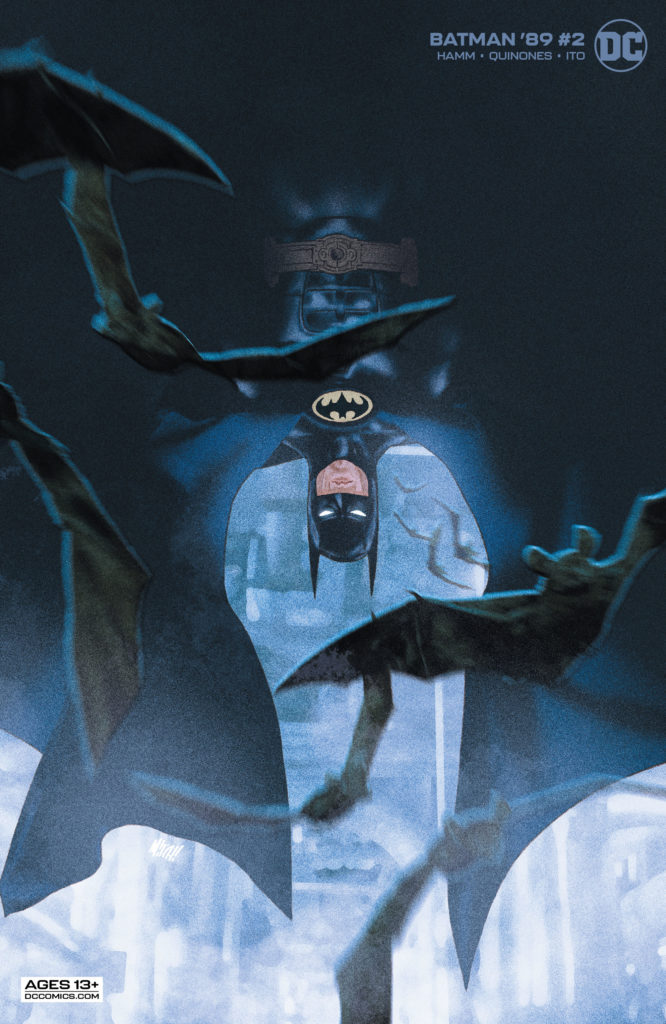 Batman ’89 #2 – Step back into the Gotham of Tim Burton’s seminal classic Batman movies! Batman ’89 brings in screenwriter Sam Hamm (Batman, Batman Returns) and artist Joe Quinones (Dial H for Hero) to pull on a number of threads left dangling by the prolific director. 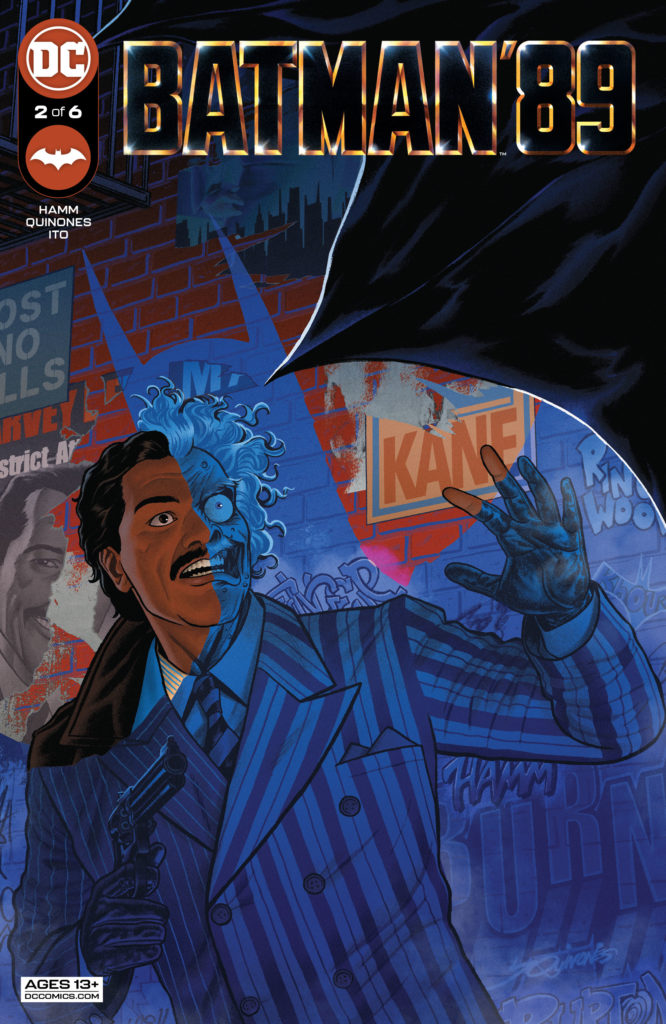 Issue #2 of this six-issue special doesn’t disappoint as you can almost hear Billy Dee Williams’ voice as Sam Hamm writes a great script and Joe Quinones takes the baton from Tim Burton’s Batman films and raises it to new levels.

Yes…that thief breaks a storefront to get a PlayStation One.  Yes…That’s Michelle Pfeiffer’s Catwoman in all her glory.  Yes…this is a wonderful and tragic new take on Harvey Dent and how HE becomes Two-Face. 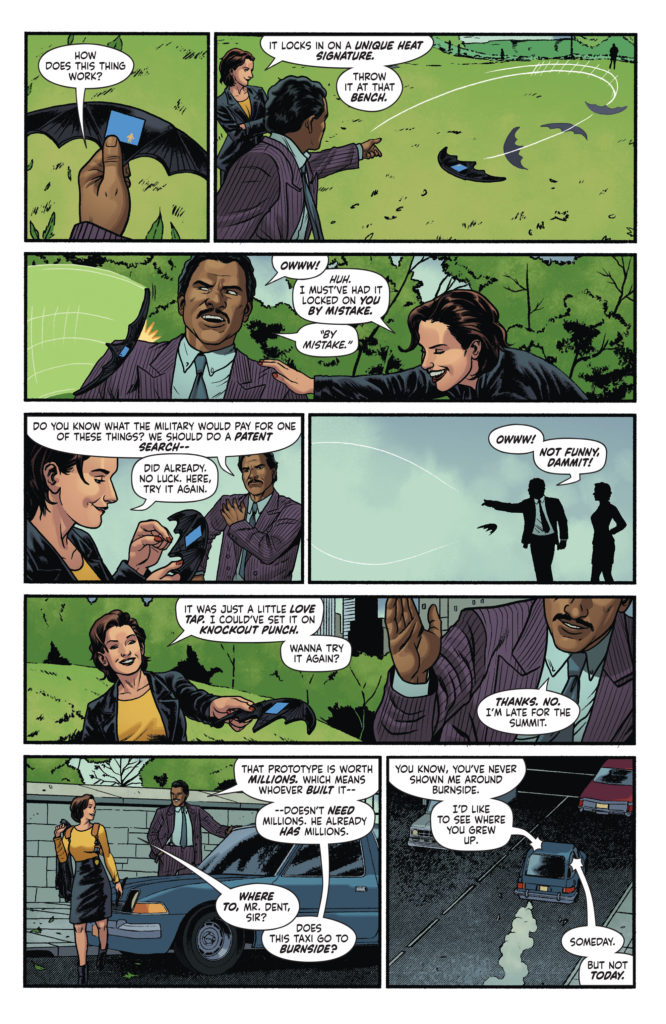 This is a slender albeit clumsier Bruce and this is a new “Robbing”/Robin Hood/Robin that fits perfectly into Hamm’s interpretation of Burton’s 1989 environment.

Bruce is albeit a rookie in some ways in this world, and his wealth is viewed as both eccentric and arguably not welcome in Harvey’s neighborhood.  Hamm places Bruce in a fish out of water atmosphere that Batman is not used to regardless of the year.

Quinones’ lens continues to impress as his renderings are a total homage to the time era and the movies that Burton gave us once upon a  time. 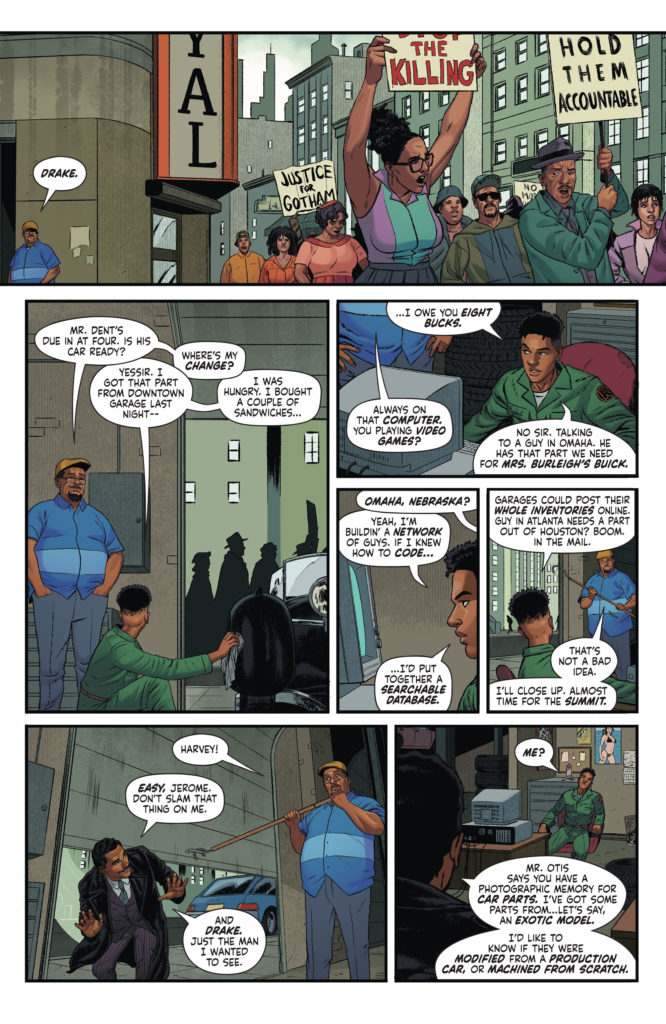 The veering away from tradition makes this mini-series a new set of toys for Batman fans.  Barbara Gordon dating Harvey Dent provides a new playground.  We know what is coming or do we?  Hamm has surprised us in a few moves script-wise so I anticipate his treatment of the next four issues won’t disappoint either.

Love the new Robin!  Shades of I Am Batman in this homage, but add another bird to the flock!

More Catwoman…More Penguin… and where to go after that?  Can The Joker reappear?  Anything is possible, but seeing Michelle Pfeiffer again in her suit provides the carrot to buy the next four issues as well!

I already want the remaining issues!  Sam Hamm and  Joe Quinones hit all the right notes.  Clayton Cowles letters like the pro he is and Leonardo Ito splashes that 80’s vibe across the pages that we so wanted!  So many Easter Eggs from that time era and so much eye candy with a solid script! Sigh…Where is my Prince Soundtrack on cassette?