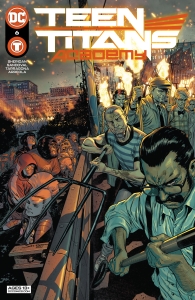 Teen Titans Academy #6: When an entire town in upstate New York turns on the students of Teen Titans Academy, while the adult Titans are on a mission, Gorilla Greg, Chupacabra, and the other new students find themselves fighting for their lives against a chaotic mob. But is there something driving the town’s madness more than just intolerance?

One of the advantages of Tim Sheridan’s Teen Titans Academy is that the title’s unique nature allows for a wide variety of stories. With three teams and multiple, Sheridan has a lot of options on who to focus his story on. In Teen Titans Academy #6, the focus is on a group of Freshmen characters, including a number of background characters we haven’t been properly introduced to.

Of particular note among these is Summer, who has cold/ice-generating powers, and the not very bright, but well-meaning Tress, who has long prehensile hair. They are paired together with Stitch, Chupacabra, and Gorilla Gregg to solve the mystery of the odd occurrences in the village of East Nyack. During a summer vacation outing, these five break off from the larger group of students to explore the town, which seems oddly deserted.

It turns out that Gorilla Gregg’s uncle has taken over the town. And it shouldn’t be hard to guess who Gregg’s uncle is, when you consider that Gregg is a gorilla and that he’s named after his uncle – sort of. 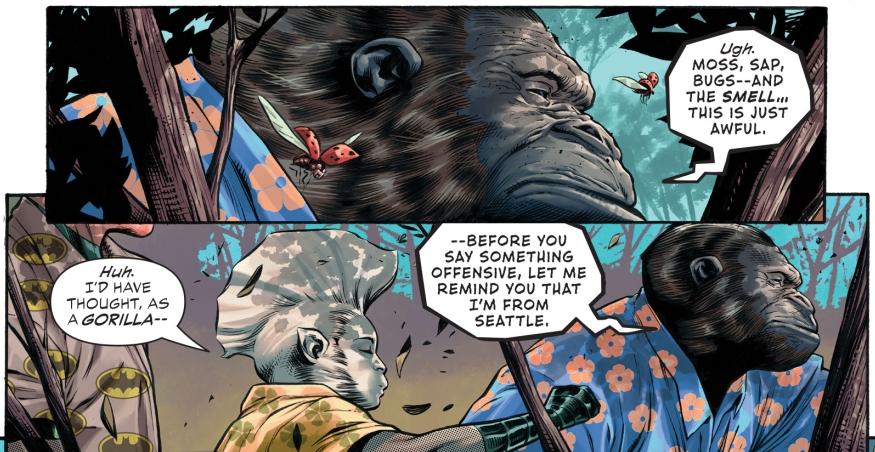 The story is somewhat lighthearted but that doesn’t mean the threat isn’t consequential. After all, Grodd is a major supervillain and quite possibly the most powerful psychic on the planet. It makes me wonder how powerful Gregg is. Presumably, Gregg is still learning to control his powers, but could he potentially be as powerful – or more powerful – than Grodd? I have a feeling that at some point in the future, Gregg will become a notable figure in Gorilla City.

There are some great humorous moments in Sheridan’s story. Especially when Stitch disguises their group as the Scooby Gang- with poor Chupacabra cast as Scooby-Doo. And Gorilla Gregg makes a hilariously unconvincing Shaggy.

There was also some flirting going on between Chupacabra and Stitch. Could a romance be in the offing here? As Stitch declares, “I smell a subplot!”. It’s only natural that some relationships will be forming among the Academy’s students, and I’m curious to see whom Sheridan matches up with whom. It will be interesting to see where this subplot leads.

Rafa Sandoval and Jordi Tarragona provide some brilliant artwork in Teen Titans Academy #6. They do a great job of bringing East Nyack to life. It almost makes me want to take a vacation there myself. And they also did a great job of depicting the characters, even throwing in some that are still a mystery to us. I hope Sheridan gets around to introducing us to all of them.

The flipside of a large cast allowing for a wide variety of stories is that it makes it hard to give everyone enough time in the limelight. So far, the focus has been on the Freshmen, with some time spent on the faculty. But, I fear that the Upperclassmen (i.e. the stars of the previous Teen Titans series) are getting the short end of the stick. I hope that Sheridan has something planned for Kid Flash, Roundhouse, and the others coming in the near future. 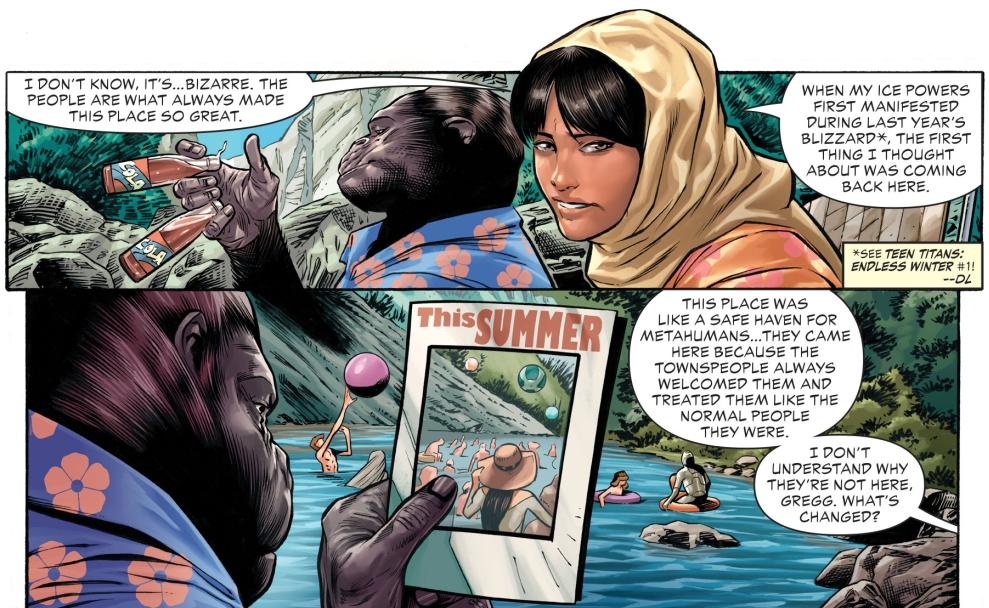 Like the previous issues, Teen Titans Academy #6 is an amazingly fun reading experience. I’m sure that not all issues are going to be as light-hearted as this particular storyline, but I trust that Sheridan will ensure the stories remain entertaining.