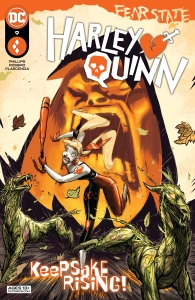 Harley Quinn #9: Harley Quinn here, reporting live from Fear State! And let me just say…I’ve jumped outta airplanes, faced down the baddest criminals in Gotham, thrown punches at Batman, and filed my own taxes without instructions from the IRS, but reuniting with Poison Ivy to try to save all of Gotham…? Let’s just say I’ve got a little anxiety. I’m only one well-dressed and overly verbal former psychologist turned heroic clown, after all. Which is why I’ve teamed with the Gotham City Sirens to take down Scarecrow and…wait…why is Keepsake here? This couldn’t just be an easy, straightforward mission, could it? I blame the writer…

Harley Quinn #9 begins with a flashback to Harley’s first meeting with Mistah J while Harley’s narration tells us about her childhood fears. Ironically, her biggest fear was of clowns. Actually, it kind of makes sense. Perhaps the lingering remnants of that fear made the Joker seem dangerous to the young Dr. Quinzel – and she was attracted to that danger. 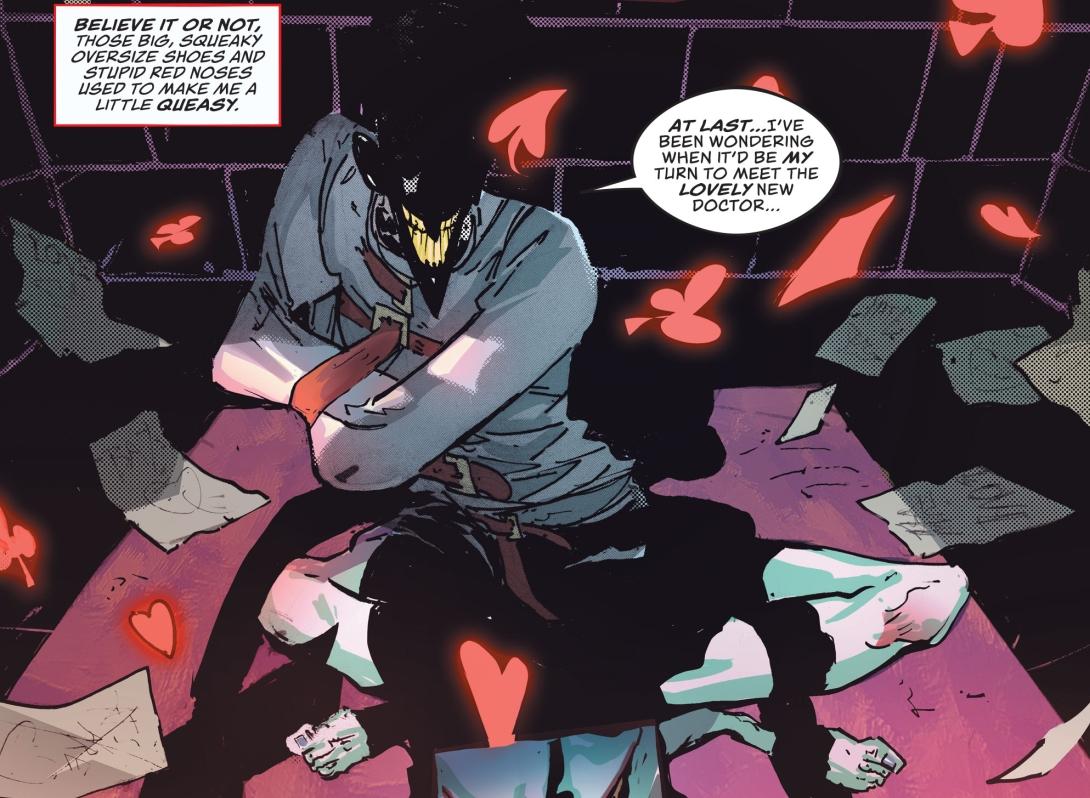 Then we return to the present, where Harley is with Ivy, who she is trying to bring back to Queen Ivy. This Ivy represents the part of Ivy’s personality that is missing from Queen Ivy, the two of them representing a complete Poison Ivy. This Ivy is also the part of her that loves Harley. And this gives Harley momentary pause, fearing that if the two merge, the part that doesn’t love her might be the dominant part.

Yet Harley proves her heroism by doing the right thing and bringing the two Ivies together. She knows it’s best for Gotham City and for all of Gotham that Ivy become a complete person again, even at the risk of losing Ivy’s love, which is what Harley fears most.

Harley tells us that “there’s nothing more terrifying than falling in love” as well as “the scariest thing I’ve ever done is open myself to Pam”. It’s frightening because falling in love makes you vulnerable to being hurt. And Harley’s experiences with the Joker have shown her just how bad you can be hurt. But Harley overcomes her fear and takes a selfless risk.

Likewise, Kevin is also showing his heroism. Not only has he rushed into a raging fire to save lives – but he makes another heroic choice. He finds Lockwood trapped in a locked room in the burning building. Kevin has a chance to exact revenge on his former tormentor by leaving him to his fate.

This gives us an amusing scene, brilliantly realized by Riley Rossmo in a two-page spread, where Kevin envisions a demonic version of Harley on his shoulder and an angelic version on the other. The two imaginary Harleys argue about what to do about Lockwood, giving voice to Kevin’s feelings. But ultimately Kevin decides that, like Harley, he’s going to be a good person and releases the former Arkham guard.

Unfortunately for him, Lockwood doesn’t reciprocate when Kevin gets trapped underneath some collapsing rubble as they try to escape the fire. Lockwood flees, abandoning Kevin, but luckily Kevin’s new friend Sam comes to the rescue. She seemed unwilling to put herself at risk earlier, so it’s interesting that she followed Kevin into the fire. Could it be that she is developing some feelings for him? It seems quite possible, considering that she goes on to ask him out for dinner as soon as they reach safety.

Harley Quinn #9 has the themes of fear and love running throughout the issue. And it’s heartening to see love triumphing over fear. Overall Fear State has done a fascinating job of exploring the concept of fear, but Harley Quinn is the title that focused on love as both a cause of and a way of combatting fear.

Harley Quinn #9 is a great example of why I love this series so much. There is a lot more thought put into this story than you would expect. Stephanie Phillips has well exceeded my expectations with this series, and I hope she continues to do so as Harley’s story continues to unfold.